Believe It Or Not, Mr. Yorkshire Pudding, A Wild Hog Is Involved Here 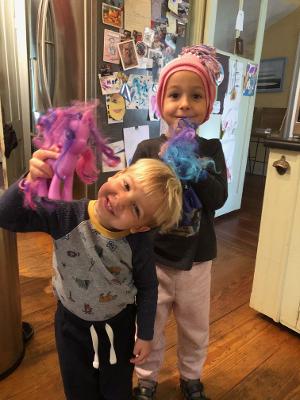 Jessie had a doctor's appointment this morning so two shiny, happy boys burst through our door around nine. They were in possession of many My Little Ponies which Vergil's sister passed on to the boys last time they were in North Carolina. The boys love them, of course. I remember My Little Ponies from when May was a child and I often say that the nicest thing I ever did as a mother as well as the most self-sacrificing, was to take her to see the My Little Pony movie.
I stand by that.

So today was fun. I made pancakes for everyone and although it was second breakfast for August and Levon, they still ate a decent amount of them. Then they had a little snuggle TV time. 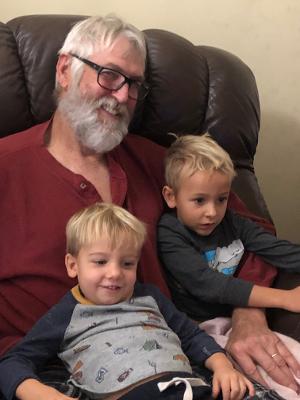 But not too much. Then Mr. Moon put them to work, helping him vacuum pack servings of sausage because barbecue wasn't the only pork product he brought back. There was plenty of sausage and bacon too.
Ooh-boy, y'all. He claims we're going to be giving a lot away and we better.

It's been one constant activity after another since the man got back. I was just living my laid-back little life, la-di-dahing around the house and yard and all of a sudden there was laundry and car business and pork packaging, a visit from Hank, and also, Vergil brought the boys over, as you saw, and projects were begun and completed including vehicle and boat moving because the Tree Guy is coming tomorrow and there was a wild pig in the garage (don't worry, it was dead- killed by a Pig Guy) and Vergil and Mr. Moon were butchering it and August was asking me to guess what color the pig's poop was (green, in case you're interested, probably because it ate from the woods) and, and, and...
Just a lot.
So today with the boys here and not a whole lot more going on than pancake-making, playing with them and reading to them and talking to them and more pork-packaging and oh yeah, more vehicle-moving and now a huge fire going in the backyard so that the burn pile will be ready to receive all the branches that Tree Guy is going to dump there tomorrow, it's been relatively calm.
Haha!
And honestly, I haven't done that much today beyond hang out with those cute boys and do a few regular chores. Still, just watching my husband can be exhausting. And tomorrow is going to be filled with the sound of chainsaws and large portions of trees hitting the ground and entire trees hitting the ground and yells and all sorts of wild fun and excitement. I know this because this will not be my first tree-cutting rodeo. And the boys may come back out with their mother to watch the fun as large equipment will be involved.
I hope they do.
One of the trees being taken down is a cherry laurel which has been in the process of dying for about fifteen years now. It's just a few yards from my kitchen door and my banana trees and some roses and other things are planted in a bed underneath it and its removal is going to allow me, I hope, to plant herbs for a real kitchen garden. Have I discussed this already? If so, forgive me. The dirt there is magnificent as it's where I've mostly thrown my kitchen scraps for years and the chickens scratch there to eat and snack and they poop and there are many, many worms. The good kind. But it's going to be a very real change to my view and my landscaping. That will be interesting.
And that's the way it is, right here in Lloyd, Florida on December 8th, 2020. Forty-five years ago today I married my first husband and I'm mighty glad I did because...Hank and May.
My babies. My life.
And the ex is a pretty funny guy, too, truthfully.
All is well.
Love...Ms. Moon
Posted by Ms. Moon at 6:00 PM