A Boy Bakes His First Cake 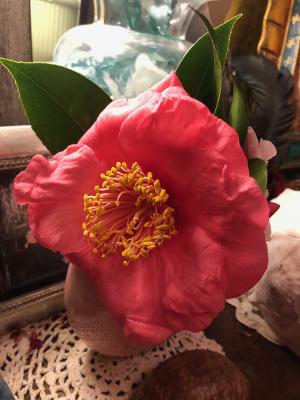 Here's another camellia that is opening up. It's very large, although you can't tell from the photo. I love the vast variety of them. The many colors and shades of those colors, the petal configurations, the stamens and how they show or don't, the sizes. I still grieve every time I walk past my neighbor's house who, when he moved in, cut down a camellia that I loved so much. It was almost a lavender. Pinkish but with a blue hue to it as well. I fussed at him for cutting it. He threw his mother under the bus- said she did it.

Like so many others who have been reporting insomnia in our blogworld, I had trouble sleeping last night. It was so annoying and I thought of everyone who has written lately about being unable to sleep. I woke up about two and just could not get back to sleep until much later. And honestly, I've felt okay all day but I do not like those dark hours of the deep night when all I want is to be unaware and unthinking, deep in the dreams that sometimes amuse me, sometimes frighten me, but always intrigue me. There are no good thoughts to be had at two in the morning, even fewer at three, and by four one wonders what the point of life is at all.

I took a walk this morning, though. It got cooler yesterday and last night and has been cool all day. We are supposed to get rain tomorrow and then even cooler temperatures but I don't see a freeze in the forecast. I had a very short chat with Jacob at my route's midpoint and he told me that I could come and pick the kumquats off the tree in their backyard anytime. I should take them eggs and make a trade. My granny, who was not a cook in any sense of the word, did make kumquat marmalade. She was of the class and era when women were only expected to be able to cook a few special dishes. She eventually managed to learn the basics because she did not marry a wealthy man, mostly involving some piece of meat to be cooked in the oven, a baked potato and a lettuce and tomato salad with French dressing to go with. Her frozen lemon dessert was fabulous as I recall though, and I learned to make the "goop" I use for my shrimp salad from her. It is the same sauce she used as a dip for crab claws which very occasionally, Grandaddy would buy at the crab processing plant a mile away on the Indian River.
Ingredients: Heinz chili sauce and mayonnaise.
Feel free to borrow it.

Speaking of recipes, look what August did today! 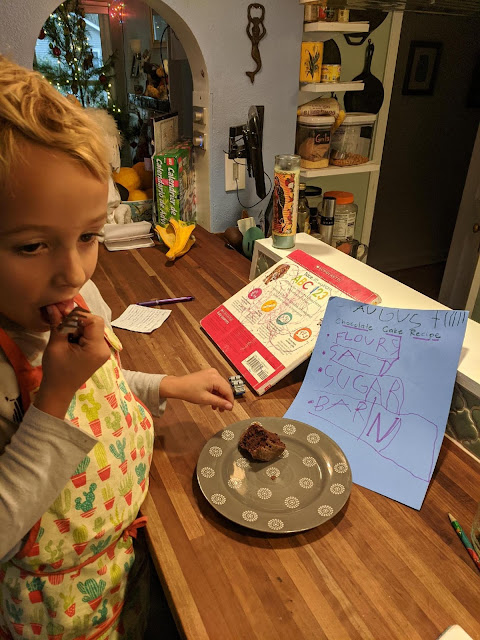 Jessie wrote, August just made his first cake- chocolate, chocolate chip! I definitely guided him with it, but he decided what to put in it. And it was quite good. Mostly, he loved the experience.
She said that it was his idea to write the recipe down. He is getting very good at sounding out words and she helps by showing him what the letters look like. "Barn" started out to be "baking soda" but he got an R confused with a K and then Jessie let them start eating the cake and that was that for writing the recipe. 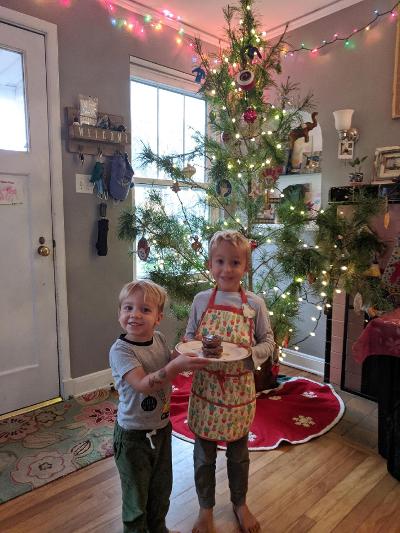 Still, I think that for a first effort, he did a very fine job and we are all proud of him.
I ordered the kids' Christmas presents today. Better late than never. And guess what? They do make pink excavators and dump trucks! Won't Levon be happy? Unfortunately, they will not be delivered by Christmas but, well, I suck and we'll figure out something else to give him. Christmas is coming, no matter how I feel about it. How I feel about it is mostly really, really depressed. I seriously want to cry when I think about it. I keep thinking that I'll get over this as I grow older but I don't. I just do not.
Still, these pictures cheered me. 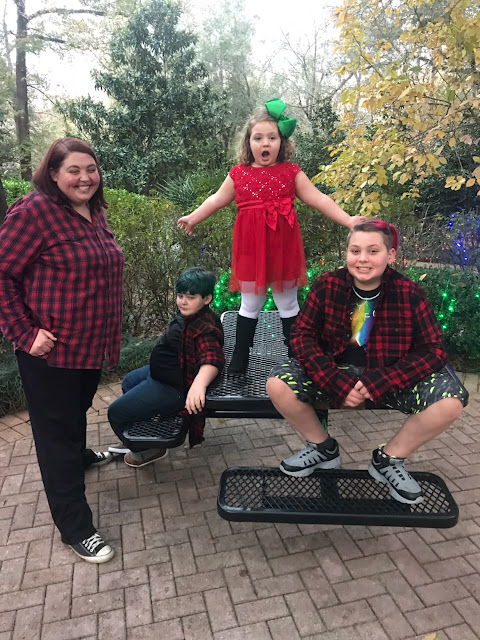 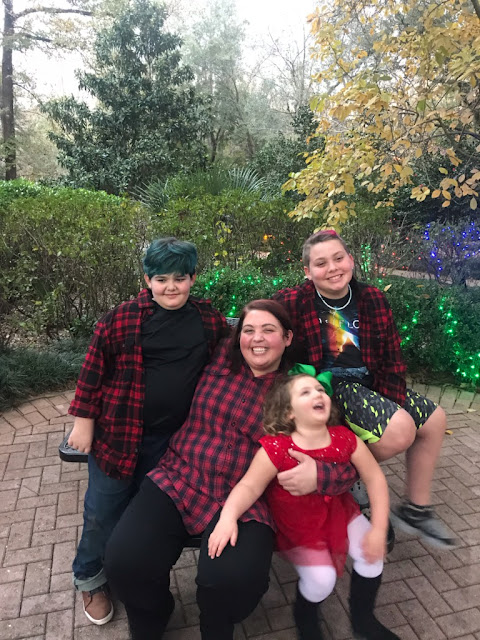 How could they not?
I have not put up one string of lights. I have not gotten even the most elfin of trees. I have not hung a wreath. I have not even put up the tiny, simple nativity that I always set out with Buddha behind the baby Jesus.
I don't have it in me.
I did have it in me, however, to make soup today with one of my giant sweet potatoes. I peeled it and chopped it and it was a beautiful thing. The flesh was perfect and unmarred, unscarred, and firm as a sweet potato could be.
So there's that.
Love...Ms. Moon
Posted by Ms. Moon at 6:29 PM