This Ain't No Hallmark Movie 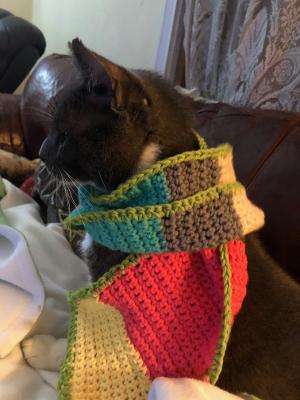 While we were watching a documentary series on the Yorkshire Ripper (how's that for holiday entertainment?) last night I finished crocheting this scarf. It's...colorful. It also screams, "HOMEMADE BY A TERRIBLE CROCHETER!"
Oh well.
I put it on Jack who was lying beside me and he rose up to stretch and I took his picture. I think he looks quite handsome. However, I will be giving it to Levon for Christmas just because. As Jessie said, within five minutes the boys will be using it to tie each other up with but that's fine with me. It's like giving money to someone on the street- you give it away and what the receiver does with it is their business. That's my opinion, anyway.

I ain't gonna lie to y'all. Today's been a hard day. Just one of those days where you're on the verge of crying and/or puking and/or crawling under the covers. As I have said so many times, I really am not sure why Christmas is so damn hard for me but it just is.
It just is.
I wrapped the kids' presents and I did laundry and I made a chocolate pie and read a few articles in the New Yorker and I went to the post office and I took the trash and I looked at the beautiful Christmas cards we got and felt horribly, horribly guilty for not having sent any myself. I almost screamed at my husband when it was apparent that he'd bought me a few little things because we promised we weren't doing that and I didn't. Kayak and stove. That was the deal.
Again with the guilt.
But he calmed me down and he's been so sweet all day. The deer finally found Lily's garden and so he spent a lot of time today working on temporary barriers to their access. FYI- deer like collard greens the best. They know what's good for them.
This morning in the online paper Mr. Moon found a recipe for cheesy-sausage bread that he asked me if I'd make for him. The recipe called for a roll of Pillsbury French bread dough and of course I'd rather make five hundred loaves of French bread from scratch before I'd go back to Publix right now so I've made up the dough and it's in the refrigerator and tomorrow I'll make his cheesy sausage bread for our breakfast. I was thinking about making cinnamon rolls but I have to tell you that I'm way over the limit when it comes to sweets at this point.
Just...no.

My kids and I have been texting back and forth all day. Rachel and Lily have still been baking. Jessie's been doing the last minute stuff she needs to do and she DID have to go to Publix. Poor May came home from work exhausted and ready to collapse. She told us that for Christmas dinner she and Michael are having sheet-pan nachos and I texted back, "You are my most brilliant child!"
Having nachos at Christmas reminded me of the Christmas Eve in Cozumel that Mr. Moon and I had four years ago. You can read about it here if you have any desire. We had nachos that night for our dinner and it truly was one of the very best Christmas Eves of my life.

Anyway.
I bought special seafood for our supper tonight. Two lobster tails and a few rock crab claws. I wish I'd bought frozen pizza instead. I am not cooking well today. It's impossible to cook when your heart is heavy. I left out the butter in the chocolate filling for the pie I made and then the bread dough I made for tomorrow just didn't come together the way it should. I usually have a very intuitive touch when it comes to bread dough with the ratio of liquid and flour and I just couldn't seem to get it right today.

It has rained all day long. It is going to get cold tonight. Twenty-eight degrees Fahrenheit, you guys. That's really, really cold for us. I have to go cover my Roseland mango. I hope the porch plants survive with their light coverings. They'll probably be okay. Here's the thing- even when my plants appear to have caught their deaths of cold, if I cut them back and give them time, they eventually send forth new shoots of green life.

I'm holding that thought in my heart, knowing that it is true for people too. Where there is life, there will be growth given time and patience, light and water. 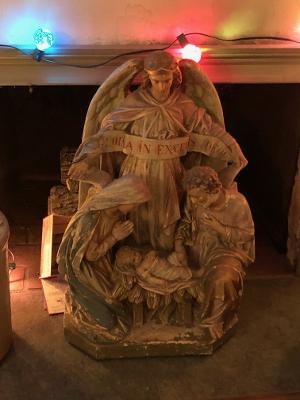 Here you go. That's the Pissed Off Baby Jesus nativity that sits in front of my dining room fireplace year round. It came with the house. I did put up lights around it. Don't say I'm not trying.
Here's to visions of sugar plums. Or cheesy-sausage bread. Or nachos. Whatever.
Love...Ms. Moon