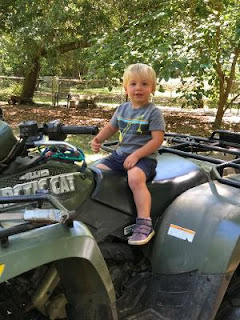 I got up a little earlier this morning and got my chores done. I feel like Granny Clampett when I say that. I brought some black beans to a boil and shut them off and started a loaf of sourdough. I ate my breakfast and tended my chickens. Last night when I went out to shut them up I found four of the teens in the same nesting box as Liberace and Dottie. Dottie was not pleased that they were in there. As I shined my flashlight to do my count, she pecked the closest one but as soon as I took the light off them, she settled back into her doze. I thought it was funny to find the little ones already so willing to accept Liberace as their rooster. But this morning I fed them all and gave them water and then I got dressed in my walking clothes and took my walk. I waved and said, "Good morning" to all of the people who are getting quite used to me on my route, including three bike riders.

I wanted to get everything done earlyish because Jessie was going to come out with the boys for another picnic and she did. She stopped at Maddio's Pizza and got us a Greek salad and pizza for everyone to share. 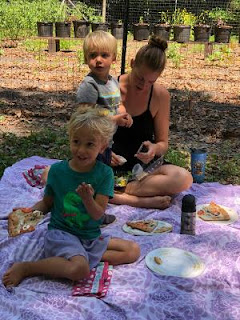 I was so looking forward to food that I hadn't made and the salad tasted good but the pizza just tasted oily and very salty and I did eat a whole piece but it wasn't as fun as I thought it was going to be. Just sitting in the shade with those three was the whole point, though, and that part was delicious.

The boys had to get on the tractor and on Bop's four-wheeler that he's been using to pull his new leaf sweeper with. I can't get over how much Levon is talking and how incredibly huge his vocabulary is. I was telling them about a giant bucket truck I saw on my walk with a man way, way up in the sky cutting branches off a pine tree and Levon said, "That's crazy!"

There was a lot of chicken observation and Jessie is trying to figure out the ones she is going to take home with her. I am just beginning to be able to tell some of the older ones apart and I have no real preference over the ones I keep although I'm afraid that we cannot get rid of Precious. Did I already tell you this?

And, well, then I read the boys some books and I have to admit that I did not keep a six foot distance. We didn't cuddle or anything but I sat a little closer to them than I probably should have. At one point today Jessie told August to step back a little way to be safe and I said, "Oh, honey. They do not have coronavirus," which is probably true and it's probably true that I don't have it either but it really isn't time to go breaking all of the rules yet. I seriously doubt that the damn thing has peaked in Florida no matter what the governor says. Levon only listened to two books but August wanted a third and I read it to him. He sat on the porch swing while I sat on a chair nearby but I did not fuss at him one bit when he came closer to look at pictures or discuss things.
Discussing things with grandchildren is one of the main joys of my life and today I just broke down and did it from two feet away instead of six.

Just as Jessie had determined that it was nap time for Levon, August ran and got a trowel and had to dig in the yard for just a minute to find treasure. In less than ten minutes he found a lot of little pieces of glass which he gave to me and a few pieces of old plates and cups. One of the crockery pieces had a sweet little pattern on it and when it was truly time to go he asked me to wash everything for him and so I did and wrapped the small shards in a paper towel and he took them home to put with his other treasures.

It's so dear to me that even here in our quarantine time the grandchildren have created routines at Mer and Bop's house. We can't go inside to play and they can't sit on Boppy's lap to watch TV but they can sit on the porch swing and we can have a picnic and they can climb on all the cool equipment and we can all play a little bit of kick-the-ball together.
August and I kissed through the window glass when he was buckled into his seat and to be quite honest, when Levon held his foot out and asked me to tickle his toes, I did.
I'm pretty sure that neither of us will die from that.

And besides that I haven't done a damn thing except to continue the supper preparations and try to redo that mask I messed up yesterday. I have GOT to start being a little more productive. The housecleaning situation is getting dire. Truly. But somehow the days all go so quickly. They slide like eels between my fingers, as if the daylight hours have been slicked with oil. Mr. Moon and I joke about this all the time but it's true! He's actually in town right now doing work on our rental duplex which Hank and Rachel are going to move into. They are eager to get out of the place they're in now where the latest problem has been constant leakage from the apartment upstairs which has required workers in their space who don't wear masks and who have left a big hole in their ceiling.
Every night I swear that the next day I will clean the showers and do some dusting and maybe ORDER A ROOMBA and the next day comes and I do the little things I do and then it's time to make supper and then it's time to shower and get in bed and read and, well...
Tomorrow.

Meanwhile, life goes on in this sliding, slippery way, filled with hummingbird watching and chicken observation and supper making and walk taking and watching the way the pecan trees are creating more and more shade every day while becoming greener and greener, as are the oak trees.
It's as if the turning and spinning and swimming-through-space of the planet has become its own distraction and entertainment.