Feel Free To Laugh If You Can 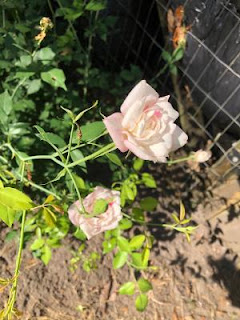 Those are some of the roses blooming around here right now. I mean they are BUSTING out. That particular rose (and no, I don't know its name) was here when we moved in but in another location. The man we bought the house from said that no matter what we did or did not do to it, it would not die. He was right about that. Mr. Moon ran over it several times in his truck because where it was planted was right in front of a gate and we never once watered it or fertilized it and yet, it just kept on living. The little flowers are hardly worth picking because if you do, the petals are apt to flutter gently to the ground. Finally, Mr. Moon asked if he could relocate it so it would not impede his truck access. I said that yes, he could and he did and it's just as happy as it can be snugged up against the garden. I occasionally put the poopy chicken hay I clean out of the nest boxes around it and I try to keep it weeded and it does get water from the garden sprinklers so it's in high cotton now. The problem is keeping it pruned back enough.

So. Nest boxes. I found a big old oak snake in one today. Those of you who've been around here for awhile have seen a few of those in my pictures. Here's one from September, 2018. 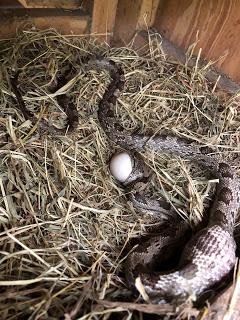 Now that one, as you can plainly see, was ingesting an egg. The one I found today did not seem to have had the opportunity yet. I didn't take a picture because Mr. Moon told me not to disturb it because he wanted to get it out of there before it slithered off into a crack somewhere, hiding and waiting and biding its time. So I did not disturb it and got out a used scratch feed bag and he grabbed the snake and put it in the bag while I held it open and when he went to town he stopped and let it out some miles down the road. Now there are only a very few things that freak out my husband but snakes are one of them and it was incredibly brave of him to do that. He was already upset because a friend of his had called him today to tell him that he'd tested positive for the virus. The friend, not Mr. Moon. They haven't seen each other in forever but he's a dear friend to my man and of course he hated hearing that news. So far, he's asymptomatic and we hope he stays that way but it does point out the fact that people can be walking around spreading and shedding virus without having the slightest idea of what they're doing. Ironically, he was tested because he'd been exposed to a woman who had all of the symptoms and while his test came back positive, hers came back negative.
How accurate do you suppose these tests are?
Okay. I just looked that up and the answer appears to be- we don't know.
More false negatives than positives, it would seem.
Okay.
Seems to me that there are a whole shitpile of things we don't know about this virus and that's scary as hell but hopefully, by the time my grandchildren are grown, all will have been revealed and people will be vaccinated.
I sure hope so.

Besides the snake, things were pretty normal around here today for me. I took a short walk this morning, knowing that I really did need to get some ya-ya's out. And then I did a bunch of stuff that I can't recall doing but I must have done them because I didn't eat lunch until after two again. I enjoyed my all-healthy-and-shit quinoa salad a lot more today because I put some of the sauce I made for last night's supper on it. By the way, here's what that supper looked like. 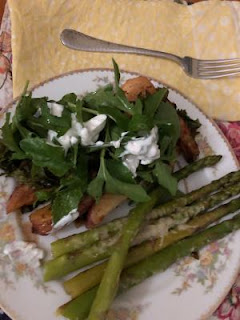 Now is that a good-looking supper or what?
It was delicious. Sheet pan chicken with potatoes and greens and arugula on top with the sauce which is Greek yogurt mixed with lemon juice, a lot of garlic, salt and pepper and some chopped up wild onions I have growing about a foot away from the kitchen steps.
Highly recommend.
The asparagus was good too.

You want to hear something cool?
May woke up yesterday to find that three of her plants had disappeared from where they'd been sitting right behind her house. She posted a picture of them on Facebook and instead of cussing out the thief, she made it clear that she realized that someone could have thought they were abandoned plants because someone did just move out of the building but that no, they were not, they were her cherished plants and if someone had taken them by mistake, she sure would like to have them back.
And this morning, this had happened. 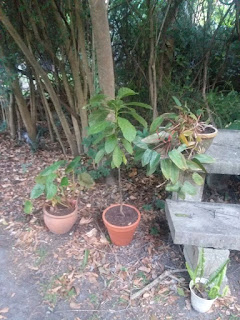 They were back! Several people had shared May's original post and so someone saw it and actually and truly brought them home.
I was gobsmacked.
She posted a message thanking whoever brought them back from the bottom of her heart.
And then she moved them inside.
Here's are two pictures of May's apartment. 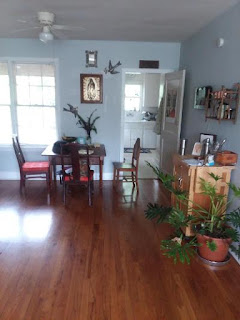 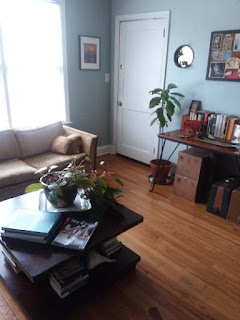 As you can see, she gets plenty of light, as I reported a few weeks ago. Isn't it lovely?

So. What else?
Well, this is what the pushing-up field peas look like. 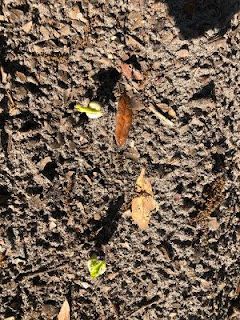 See those pretty little sprouts coming forth from their mothers?

The baby chicks are getting big enough to flutter up to sit on top of their feeder and waterer. In fact one took the leap out of the bin today but Mr. Moon caught the little critter and put it back and placed the screened lid he made over the top. I think that tomorrow I may let the teenagers out into the coop and let them expand their world by about two thousand percent.
That's always a joyful day.

I did not go to the grocery today but Lily picked me up a few things that we sort of really need and will bring them over tomorrow. I will go shopping next week. I feel so spoiled and taken care of.
I feel lucky as hell in all ways.

And let me ask you a question- do you feel like you're spending a lot less money these days? I mean, casual shopping has gone out the window and yes, of course we can still shop online for some things but frankly, I'm not doing that because I don't want to be part of anyone having to go to work to pack and mail or deliver anything that's not a necessity.
I don't think I generally go to the grocery store that often but I'm obviously going a lot less these days and I'm being so very careful to use every part of what I buy and what I cook. No impulse shopping involved. Every thing I buy is planned out and put on a list and carefully considered. I am finding it very amusing to see what my husband adds to the list. He seems to have developed a craving for the queso made with Velveeta and Rotel tomatoes. And by god, I'll buy the ingredients. AND a bag of chips, of course, because one does need an excuse to eat the stuff and by that, I don't mean owning a spoon. He also wanted some pimento cheese and I offered to make him some but he said that he'd really like some of the plain old regular orange stuff so that he can put it on some Ritz crackers when he gets hungry.
I asked Lily to get plain old orange pimento cheese and Ritz crackers in our short list of necessities.

Friday night and yes, they're singing at the church next door. The first damn thing on the list of exemptions for Florida's way-too-late statewide restriction of movement mandate is religious gatherings and if that isn't the most stupid damn thing you've ever heard I want to hear what is. Gun shops are also considered "essential".
Even my husband who is a hunter and who generally stays out of political discussions is disgusted about both of those things.

Oh well. We just had a cocktail hour chat with Lon and Lis on speakerphone and it was lovely. We all laughed a lot. We talked mostly about gardens and hummingbirds and snakes in the hen house and a knife accident that Lon had (he's fine) and what we're having for supper.
And so it goes again.

Here's a picture Lily just sent. She's home from work and Pepper is happy to see her. 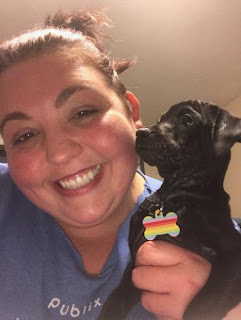 She reports that about 1/5 of the people in Publix were wearing masks including (and here she said, "I shit you not") one of these over her mouth and nose region. 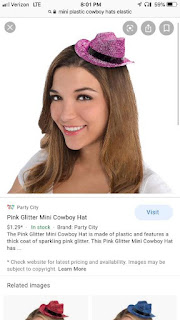 "It was literally the pink sparkly one," she said.

What more is there to be said?

Happy Friday or whatever passes for happy these days.