As Dear Keith Says, It's Not The Rock, It's The Roll 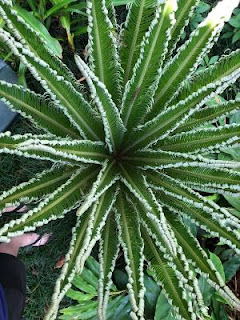 I am absolutely fascinated by the way this Sago palm (and all Sago's for that matter) is making its new fronds. They are so soft and absolutely curled at the edges like little pig tails and they will open up, straighten up, and grow horribly prickly and sharp as they mature. I know I have said this before but Sago's are not palms at all, really. They belong to the cycad family and have been around since the dinosaurs. Anything that has been around since the dinosaurs is obviously a most hardy and well-evolved thing.
I read an article the other day about how scientists have managed to mess around (purposefully) with the expression of genes in a chicken embryo to create one that has a dinosaur-like snout instead of a beak. It was not a matter of introducing any new genes but rather of canceling out the expression of the genes which are still there which produce the beak.
Here's the article if you want to read it.
I just find this fascinating.
Jessie and the boys came over for a little while today and brought their lunch with them and I made Mr. Moon and me sandwiches and we sat outside and had a socially distant picnic in the shade which was absolutely delightful. 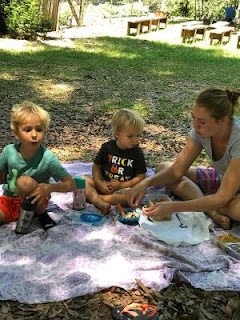 We were discussing the story about the chicken with the dinosaur snout (and scientists did not allow the egg to hatch although they feel as if it could have survived just fine) and Mr. Moon said that he did not think that trying to repopulate the earth with dinosaurs was a good idea.
Jessie and I disagreed but of course we were only basing our thoughts about that on sheer fantasy and what the awe and amazement of seeing a full-grown giant dinosaur come to life would be like.
"Bring back the wooly mammoths, too!" I said.
Again, Mr. Moon disagreed.
"So, we could be sitting here eating our lunch and a wooly mammoth would come crashing through the trees and destroy everything around us," he said.
I suggested that if they start bringing back extinct animals, it would probably be one of the giant armadillos the size of Volkswagens that would be most apt to come wandering through out yard, seeing as how the regular modern-day version of them already live under our house.
The boys did not seem interested at all in this discussion. They were too busy eating hummus and soybutter sandwiches and apples and carrots and so forth.

It was SO good to see them. They got to ride on the lawn mower with their mama driving it. Levon was especially thrilled about this. He told the whole story to us and said that "Mama got faster and faster!"
He is speaking so well and his grammar and word-usage are quite impressive! He has a slightly gravely voice like Gibson's and it's so hysterical to hear that old-man voice coming out of that little boy. He and I took a walk around the front yard and he got up in the swing and I took his picture. You can tell that he has a lot inside of him that he is ready to say.

August was happy to be here. He played on the tractor with his brother of course and challenged his Boppy to a race.
August won.
He's got those beautiful long legs, brown and sturdy. He curled up in his mother's lap for a little while and he melted my heart. 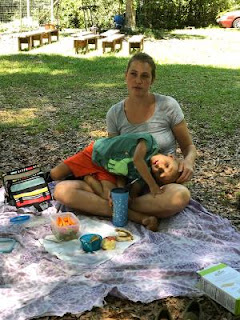 We all played a casual game with a big ball, kicking it from one to another and that was fun. We could stand far apart and yet still do something together in real life. Levon would get so excited when the ball was coming to him that he did a little tap dance. He's a good kicker with accurate aim.

We adults also talked about the virus, of course. Mostly about how ignorant people seem to be about social distancing. Jessie had just been to Costco the day before and said that they were obviously really trying to do their best with employees constantly wiping down freezer handles and making sure that people were staying six feet apart at registers. She said that most people there were wearing masks. Mr. Moon talked about how horrible it was at Lowe's where no one seemed the least bit concerned, employees included. Jessie pointed out that if a business shows concern, people seem to pick up on that and are more careful.
I think she's probably right.

After they left, Mr. Moon went out and worked on putting together the new garden cart he bought yesterday and I did absolutely nothing. And I didn't worry about it! I took a long walk this morning and let the rest of the day fall where it may. I even laid down on the bed and read for awhile and then put my book down and closed my eyes and just as I was falling asleep, I heard Liberace crowing, obviously in the house because it echoed like he was being amplified. He practically shook the walls. I got up and chased him out of the kitchen and after that I couldn't settle back down so I finally got up and made a blueberry cobbler with frozen berries that were in the freezer. It's in the oven now.

I think I'm going to have to go into town later this week. I have to pick up a prescription and I am running out of all of the vegetables that we don't have in the garden. Jessie brought me a zucchini, a yellow squash, a half of a small head of purple cabbage, and a cucumber so we're not in dire straits but I have a list that fills up one side of a large index card and to be honest, after two weeks I am almost looking forward to a little jaunt outside of Lloyd although I am mostly completely happy here.
Mr. Moon's bike helmet that he had ordered came in the mail today and that was big excitement. Tomorrow we have a Zoom meeting set up with the doctor from Mayo. We've both downloaded the app and hope that we can figure it out for real and true when the time comes.
I hate sounding like an old person but let's admit it- I am an old person.

And always we are grateful.