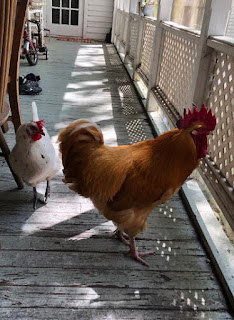 There's Liberace and his true love, Miss Dotty. They hang out together almost all the time and when it's not the two of them together, it's Liberace and Dotty's sister, Darla. I would say that Liberace seems to prefer white chicks but as we all know, that would be incredibly wrong to say on all levels
and I would never do that.
Still. True. Although it could also be that the sisters like him better than the other sister-wives do.

I should go back and see just how long it's been since Mr. Moon and I have been basically self-isolating. I know that the last time I got to hang out with Levon and August was the day I babysat for them. I just looked it up. That was March 17th. So on Wednesday it will have been four weeks since we really started this whole stay-at-home thing. Really? I thought it was more like forty-four weeks. Or years. And it's not that I'm bored or tired of being at home. I am not. It's just- you know. I can't touch my babies.
But once again I will go over all the ways in which I am the luckiest of the lucky.
I am not alone and I am not having to live with someone I do not want to be with. I am with my love. I am not stuck in an apartment in a city where there are no trees to look out at. I have two acres of land to walk around on, to tend, to watch birds and critters on, to keep my chickens on. I have a garden. I have chickens. I have internet and TV and more information and entertainment at my fingertips than anyone in history had. I can take walks. I have books. I have food. I can cook and bathe and wash my clothes. I can be in touch with all of my children. I have HOT AND COLD RUNNING WATER! The weather has been glorious. We are healthy.
All of this and so much more.

Still I will admit- today was another hard day.
I did take a walk. I passed by this sign for about the fiftieth time. 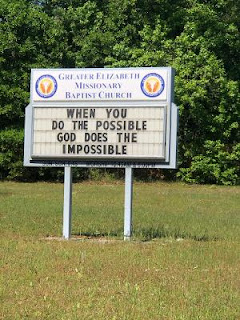 For about the fiftieth time it annoyed the fuck out of me. I wish they would change it for the simple fact that it would be something new in my life.
I almost said something "novel" but I decided that that, too, was a poor choice of words.

Two men were talking in the shade of a yard and I did not notice them but they called out to me. We greeted each other and I said, "Stay healthy!" and one of them said, "God bless you!" and that's okay. To be honest one of them was in a wheel chair so the "stay healthy" thing was probably inappropriate.
My brain is not firing at rapid speed these days.
Or as Gibson used to say when we were driving and he was in his little car seat in the back, "Go super speed, Mer!"
Mmmm...
No super speed these days. Not from my poor old mind.

I had a list of four things I really needed to do today.

1. Give little chicks a fresh bin and clean up the one they were in.
2. Finish folding laundry and put it away.
3. Kick bamboo.
4. Plant a row of arugula.

In real life that would possibly take me an hour.
It took me all day long.

And a nap was required late this afternoon.

Mr. Moon got up early and went fishing on a lake. I think this is quite safe as he is entirely alone. Unless he has a girlfriend I don't know about but I don't think he does.
Can you imagine being one of those women who discovers at her husband's death that he had an entire other family for years and years? Where do these women think their husbands are when they're not with them?
Well. I have to admit that in another lifetime/marriage I ignored a whole hell of a lot that was going on right under my nose because I DIDN'T WANT TO KNOW THE TRUTH! It can happen.

That was a strange segue.

Anyway, I'm glad my husband can get out and be on the lake. He called me and I could hear birds singing and calling and he sounded so happy. He brought home a few little fishes for me to cook and that's a nice thing.

When he got home he fixed a place in the chicken coop that I caught the teens trying to escape from this morning. A little hole where the wire had rusted through. Luckily, they weren't sneaky and when I opened up their cage coop they rushed right to the place and demonstrated how they were attempting to stick their bodies through. I put a board up in front of the place to block them but he repaired the rusted out part with some fresh wire.
The baby chicks are going to have to go out soon. They are getting big and getting feathers and it's time for them to move on to the next step. I may keep the banties in a few extra days because they're still so tiny. Especially that little yellow one. I'm so happy that they're all still alive.
Knock wood.

All day as I went about my chores and avoidance of chores I listened to an audio book that is becoming another source of gratefulness in that the protagonist's life is so horrible and sad and boring that I realize how rich and not-boring my life is, even in the midst of a global pandemic. It's one of those stories about a woman who has to work in an office and she hates it and she has no real friends and she's thirty years old and her parents are still basically supporting her and she keeps thinking that if she just cleans her apartment and takes yoga and eats better and meditates and buys new clothes, and, and, and...
All will be better.
I have no idea why I'm listening to it. It's sort of depressing.
Obviously.
I blame it on ennui.

I guess that's about it. I figure that in a few days or a week or a year or something I'll simmer down from my trip to Publix and all will be well again.
I wonder if I'll ever do any cleaning again in my life? As Lis would say, "It's coming up on the big wheel."

Mr. Moon's outside making a fire to cook steaks over. Yesterday on my gargantuan shopping trip I bought two giant ones praying that the animals they were cut from were happy as they lived their lives. I did get the Greenwise ones which is Publix's house brand of "natural and organic" foods and the cows were supposedly grass fed. Whatever that means. Liberace, Darla AND Dottie are all out there with him, curious as to what he's doing.
We're supposed to possibly get some rain tomorrow. I sure hope we do. We need it.
We're also supposed to get a most gorgeous moon tonight. Be sure to check that out.

Hang in there, people. Four weeks, forty-four weeks. Whatever it takes. We can do this.
Theoretically.