Many Pictures of Cute Children 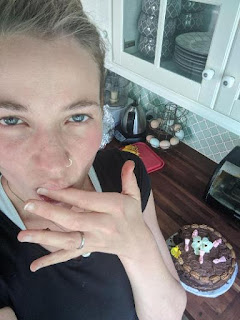 I woke up this morning knowing that I had OBLIGATIONS which sort of freaked me out. And sort of stressed me out, too. I mean- it's been weeks since I had any responsibilities beyond meals and laundry. Everything I've been doing has been whatever I wanted to do and basically, whenever I wanted to do it.
But I had offered to make Jessie a birthday cake. Tomorrow is her birthday and she'll be working so Vergil had suggested that I make one today because she would like that. And then he added, "Or maybe it's me and August who would like that."
Haha!
So.
I HAD TO MAKE A CAKE!
And I had to take a walk because it was cool and I didn't walk yesterday and I have to keep this good habit up and, and, and...
You know.
And on top of all of that, Lily and the kids were coming over for an outside visit.
Phew!
So much for one day!

I got back and ate some lunch and made the bed and then Lily pulled up with my darlings. Maggie had to run immediately to the hen house to look for eggs and then she wanted to go see the little chickens so into the coop she went. Owen and Gibson went with her and they all wanted to hold one of the chickens of course, and it turns out that Precious is pretty sweet about letting that happen. 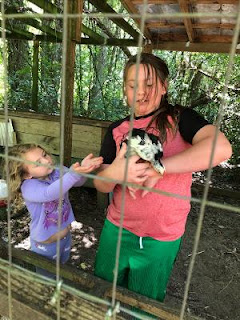 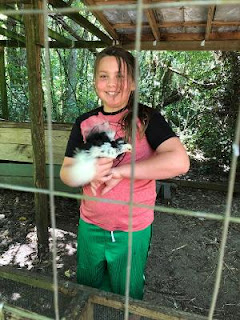 Owen went first because he has experience but Maggie was eager.
Gibson went next and then he helped his sister. 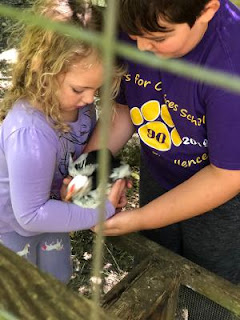 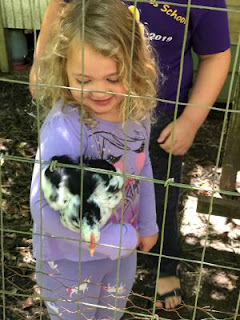 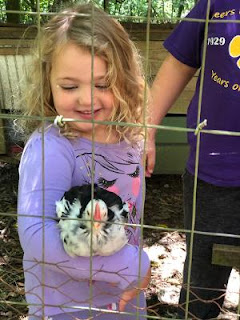 Precious just perched on Maggie's arm like a parrot, happy as could be.

After egg gathering and chick-playing time we mostly just talked and walked around the garden and Gibson picked a carrot and did his Bugs Bunny imitation.
"What's up, Doc?" When he had finished all but the last little bit of the carrot he tossed it on the ground and Pepper found it and gnawed on it. She is becoming just more and more beloved.
Maggie watched Boppy using his new leaf-bagging technique and wanted to help and so she did. 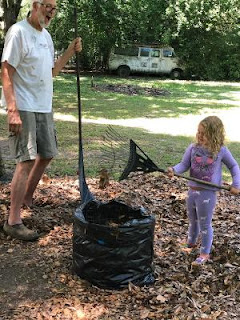 I swear, Mr. Moon is inventing and creating one new thing after another during this time of being home bound. It's pretty cool.

And then it was time for them to go home for whatever their next activity was. As they left all of the kids were telling Lily what it was they wanted and needed NOW and I looked at my daughter and once again, was just bowled over by how competent and patient she is. This whole homeschooling thing is HARD if it's done right and she is doing her best to do it right. There are the Zoom classes and there is work to do and it would be so easy for her to just let them blow it off. But she's taking it seriously and I'm so proud of her. I mean- it's hard enough just to keep your sanity with three kids at home day after day, week after week, but she's managing it all. 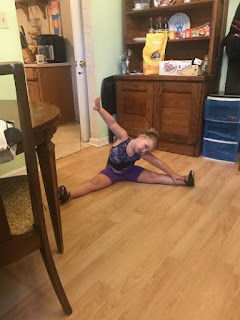 I love how she gets dressed for class in her leotard and lets her mama put her hair up. Impressive!

And after that part of my day I made the cake. Lis told me that Lon had made her a Mississippi mud cake for her birthday which reminded me that I hadn't made one of those in a long time and since I had all the ingredients, that's what I made. I use the recipe in a Moosewood cookbook and it's a good one with plenty of chocolate, coffee, and bourbon.
Hard to go wrong, right?
I have to admit that it came out looking like...well, mud. But it was what it was and when it was done I wrapped it up and drove into town and delivered it to the almost-birthday girl.
I can't believe that thirty-one years ago she was still living in my belly. But she was. And we were living just a few blocks from where she lives now. That was where she was born, right there in a red brick house on a rainy day when the magnolias were blooming.
So I handed over the cake and talked to the boys.
I got to see ALL of my grands today! 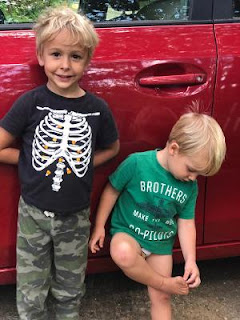 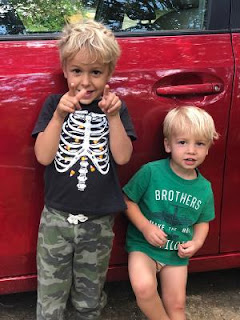 When I wanted to take their picture I said, "Where should you stand?" Jessie's front yard is looking beautiful with little gardens everywhere with growing vegetables and flowers and herbs which would have made nice backdrops but no, August wanted to stand by my car.
And so that's what happened.

I sped home and cleaned up the kitchen and made a white lasagna with tuna and mushrooms and spinach, and picked greens for a salad.
What a day!
I am really looking forward to tomorrow when I have nothing planned at all except to take my walk and wash my sheets. It is supposed to get down into the low fifties tonight and I can't tell you how much we are enjoying this weather. Lily said today that it's a shame that they're having to waste all this great playground weather because by the time they can go play it's going to be too hot and she is NOT doing that.
We talked about how we are SO hoping we can go swimming at the Wacissa this summer. I just can't imagine a summer without the Wacissa.
Well.
We shall see.
Safety first.