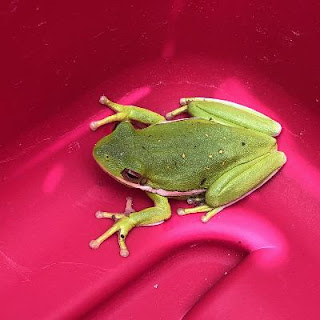 Today I did not get half as much done as I did yesterday when gravity pulled me ten thousand times harder. Today was easy and sweet and I didn't give a rat's ass that I wasn't being productive. I spent hours working on a crossword and I talked to Lis and I talked to May and I gave the little chicks a fresh clean bin.
Since I have two of these large bins, I've just been putting the chicks in one and cleaning out the other which is honestly the easiest way to do it. This morning when I went to get the fresh one I found this large green tree frog. What a beauty! I helped him out and he hopped up to perch on the wisteria vine. 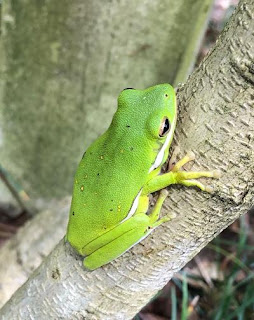 It won't be too long before the littles are ready to go outside into the baby coop but we're going to have to figure out where the bigs are going to roost at night. Last night they all went into the little coop and no one had to chase a chicken in the dark with a flashlight!
It was thrilling. We have decided that these are the smartest chickens we've ever raised. 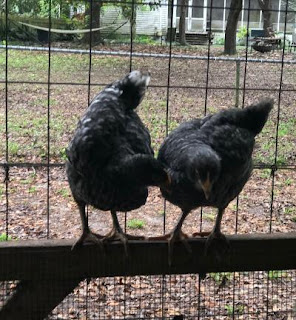 Here are two of the nine this morning.

Lis and Lon are doing well. Lis and I always talk about the same things and mostly, that would be food and what we're cooking. And what we're getting out of our gardens. We still giggle and laugh and it's such a high point of my day when I get to talk to her.

May and Michael also seem to be doing well. We talked about food too, because isn't that what we're all talking about these days? We also talked about the horrors of how this pandemic is being handled by the administration and how all of this is shining a very bright light on the inequalities and major problems in this country. I told her how this morning I was reading an article in the local paper about the situation in Tallahassee. It was an interview with a local doctor and his prognostications about what's fixing to happen here are not optimistic in the least. As I read I found myself dissociating so badly that I had to keep anchoring myself in where I was, physically. I could feel myself losing touch with my physical surroundings in a way that was quite disturbing. When I realized what was happening I just quit reading the article. I got the gist of it. It's going to be bad. I'm already doing what I need to do to stay safe and there is little more I can do.
Immediately I went back to my normal state of denial and the day around me became itself again, my table and walls and cardinal directions were once again solid and real and that was that.
Besides that and some hives (inner right arm, left calf) and a fairly complete disinterest in eating (ironic, eh, considering my obsession with food and cooking?) I have been very light-hearted today and my attitude has been mainly cheerful.
The dishwasher needs unloading, there is laundry to fold, the bed has been made and frolicsomely unmade, there is a pot of ragtag soup on the simmer made with vegetables and ground venison and pasta will be added at the end. There is loaf of sourdough in the oven. Mr. Moon is out doing something in the garden. He rode his bicycle today and went over to help a friend till his garden.

Jessie reports that they are on staycation. They had planned a trip to a beach with Vergil's mom and her husband which of course is not happening and so they're going to make the best of it at home. Tonight, the boys and Vergil are going to sleep in a tent in the backyard. Here is the picture I got of the boys getting ready. 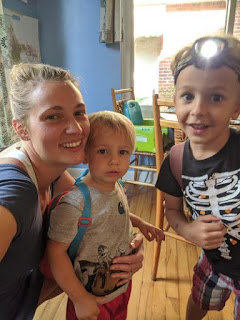 August looks to be a bit more ready than his brother.
Jessie plans to spend the evening watching something trashy like "Tiger King".

I just watched the best thing on the internet ever. Billy (you know Billy!) has a mama who's been very sad the last few weeks because of having to stay in and stay isolated so Billy secretly arranged a parade of friends to drive by and give her love from a distance. Car after car went by and slowed down and there were banners on the cars and people tossed her presents (including toilet paper) and I'm a little weepy now, after watching it.

The best of times, the worst of times.
Okay, this isn't really either but there sure is a lot of sweetness going on. And for right this second, that's what I'm going to concentrate on, put my focus on. I know damn well that I'm in denial about what's going on in the world and about what might happen. But I also know that worrying about it all doesn't help a soul and it creates a sickness inside of me that I cannot dare to fall into.

Please be well. Please be safe.
We need all of us.