Babies And Hanging On

I woke up this morning from a dream I'd certainly never had before. Jessie had had another baby. Another little boy. She hadn't told any of us she was pregnant and I'm not sure why but suddenly- there she was with this baby.
And although I knew I shouldn't, I couldn't help myself- I grabbed onto him and I would not let him go. I held him and held him and held him. August and Levon were there too and finally I said to myself, "fuck it", and I started holding on to them, asking them how they liked their new brother, and making sure that they knew I loved them.
We needn't disturb Freud's eternal rest for an explanation of this dream. The new baby was a stand-in for all my grandchildren and each one of them is changing and growing so much as these weeks pass without me being witness to that change and growth that I'm afraid they will all be strangers to me when this time is over.
At least, that's what I think.
Just as I missed out on Jessie's pregnancy and birth in my dream, I am missing out on my grandchildren's lives.
And I can hardly bear it.

This morning was hard. John Prine. Charlotte Figi. I didn't know either of these people but they have meant so much to this world and now like a candle snuffed by an errant and uncaring breeze, they are gone.
As are so many every day.
How does anyone believe in a god when a little child like Charlotte goes through what she has gone through in her short life only to be taken by a virus that had nothing to do with her except that in her it found a host and it did what it does and now she's gone?

A local Publix employee has tested positive.
I am so scared for Lily and for Jason and for Lauren and for Billy, too, who works daily at the Coop. I can't think about it. I can't lose my mind. I need what few shreds of it are left.

When I was almost home from my walk, tired and beet red and sweating, my next door neighbor came out of his house. This is the couple with the now-faded Trump sign still in their front yard. I stopped and took my ear bud out of my ear and called out, "How are y'all doing?"
He couldn't hear me for the yapping of their many dogs who were in the front yard so he stepped out of the gate and headed right towards me. I put my hand up like a traffic cop's and said, "Stop! I might have it!" He looked surprised but he did stop. We exchanged a few words and I told him, "The hardest part for me is not being able to hug my grandchildren."
"Why can't you hug your grandchildren? Did they move?"
"Because of the virus," I said, feeling possibly foolish because maybe I'm being ridiculous. But I said, "We're all trying to be very careful."
"Oh yeah," he said. "Well, I think that pretty soon it's just going to go away."
And because I'm me I said, "I don't think we've seen nearly the worst of it yet."
He shook his head and walked to the car and I walked on to our house, glad to be back within its safety.
I don't even know why I needed to say that to him. He's going to live his life the way he wants to based on whatever Fox news tells him.
I'm an asshole, probably.

Anyway, here are some pictures of the Hartmann crew that Lily sent. 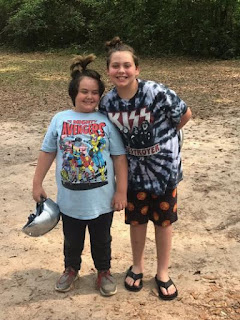 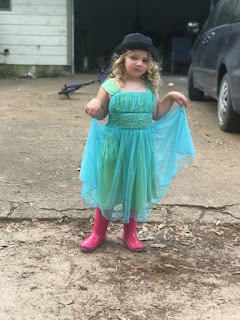 They look good, don't they? And their senses of style never fails. Oh, what I wouldn't give for a cuddle puddle.

I tried an experiment today. Here. This is how it turned out. 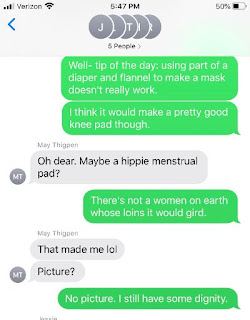 So much for that attempt at homemade protective gear.
I'll try again tomorrow with some regular fabric, I guess. The problem is, is that most of my leftover material has dinosaurs or unicorns or chickens and flowers on it. That's fine for me but I'm not sure that Mr. Moon would gracefully accept a mask made of these patterns.
Oh hell. He probably would. He's not exactly worried about his masculinity.
I could use cloth napkins. Not like I have any lack of those around here.
We shall see. We shall see.

The rain we were supposed to get never came. Maybe four drops. Another thing to worry about that I have absolutely no control over.

Well, here, because everything can't be gloom and doom. 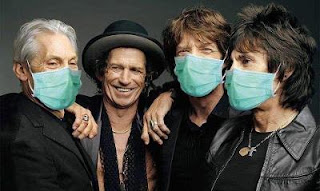 A blog reader sent it to me and it's like she knows me. I posted it on FB too, with the comment about how honestly I want all of those boys to wear two masks apiece. I do hope they are all being safe with their wives and children and grandchildren and girlfriends or whatever.

No more though, than I hope you are. And your loved ones.

Off to make tacos and a sort of pickled cabbage slaw out of the one tiny head of cabbage that I managed to grow in the garden. It's smaller than the head of a newborn baby.
Maybe I'll get to hold another one of those in my dreams tonight.
A baby, not a cabbage but as we all know, dreams are odd and one cannot dictate how they will go.
At least I can't.