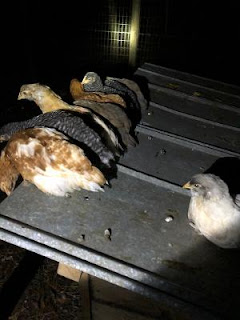 Mr. Moon and I are trying to figure out how to get the teens to sleep in the big hen house so that we can let the youngest chicks out into the coop. I know- this requires more explanation but it's probably not very interesting to anyone besides us but instead of putting them in the little shelter in the coop where they have been sleeping while they were sequestered there, we moved them last night to a nest box in the hen house. They were sleeping on the edge of the shelter box and we were able to pick them up, two or three at a time, to move them. They complained and fluttered a little bit but we held them to us and shushed them gently and they didn't fight the process. I wonder what they thought when they woke up this morning?
This may take awhile.We've never had two different age groups of babies to transition as far as I can remember so we're just trying to figure it all out on the fly.

It's been another day in a long, long stretch of days in Lloyd. I walked again. I have already walked thirteen miles this week but I do not plan to walk tomorrow. I am going into town for supplies and want to get it done early-ish.
We did have a rather major event today in that we had a Zoom meeting with Mr. Moon's doctor from Mayo and that went fine. It was just as we expected- none of the routes they explored towards a diagnosis showed anything. So. As Mr. Moon said, "I have stumped Mayo!"
He is not proud of that. We had hoped with all of our hearts that a diagnosis which could lead to treatment might be found.
The charming Dr. Oskarsson did emphasize that my husband is otherwise very strong and healthy which will help him greatly in the long run.
Mr. Moon, being the realist that he is, took in this news and decided to go fishing.

I am so fucking proud of that man. Dr. Oskarsson has no idea how strong he is. But I do.

Let's have some pictures, shall we?

Here's something that was on the sidewalk this morning. 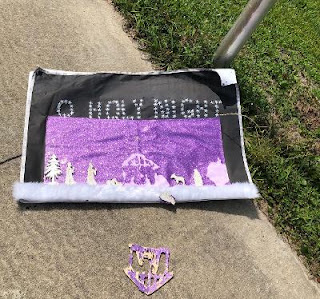 I assume that a nearby church may have been doing some clearing out and that this escaped the trash. Or maybe not. Who knows? In other times I might have at least picked up the figures that were left and brought them home. These days, we don't dare touch a darn thing that we don't have to.

Here's a pretty Cherokee Bean blooming outside the fence of the ranch I pass. 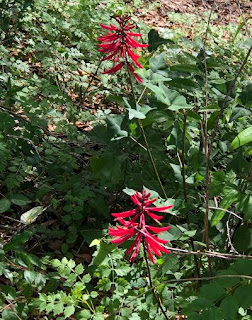 The purple salvias are starting to bloom in my yard. I wonder who planted them? I only know that I did not. 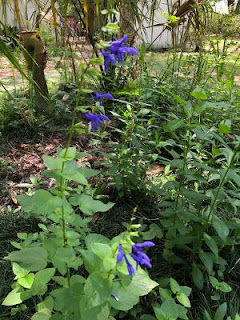 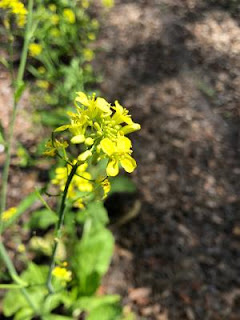 And finally, the confederate jasmine which is, as we speak, filling my nose and soul. 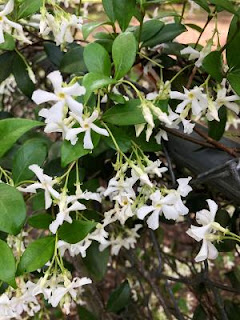 There are thousands of the small blossoms on the southernmost fence in the yard and there is a stretch of fence at least twice as long to the east which is just starting to bloom. Soon the scent will be overpowering. It will be so strong that I will curse myself for ever planting it to begin with.
Okay. Honestly- I already do.

I'd say something about Earth Day but I don't have it in me tonight. I guess I can say that I'm glad I live here. On earth. Even though we humans have just about trashed it like we'd trash a bar on a Saturday night thinking that hell, someone's going to be paid to clean it up on Sunday morning.

Wish me luck tomorrow as I go out into the world to mingle with the many.