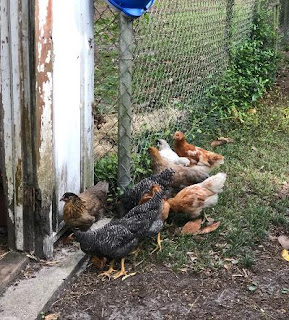 The teens made it all the way to the pump house today which is farther from the coop and hen house than they have gone before. They are getting braver. And bigger. When I went outside to collect the eggs in the hen house they all followed me as fast as their little legs could carry them (which is pretty fast) because they thought I had treats for them.
Sadly, I did not.

I didn't take a walk today. I slept so late and since I'd already gotten in almost nine miles this week I decided to try my hardest to do a little housewifely stuff. And I did. Two bathrooms are somewhat cleaner although I would not even try to tell you that what I did was deep cleaning. That would require a ladder and scrub brushes and other accoutrements that I have no interest in dealing with. But there is less mildew in the showers, and the rugs and sinks are clean and the floors are at least swept. I did reach up with the broom in my bathroom to get some spiderwebs and I saw that there was a spider-looking black blog in one of them but I figured that maybe it was dead only to realize a few minutes later that it was most certainly NOT dead but in fact, quite alive and crawling down my arm.
OOH BOY! It was a biggun, too. And very, very black.
I made a little scream and shook it off. I'm not afraid of spiders, per se, but I don't want them crawling on my own personal body, either.
So, the problem was that after I shook it off, I could not find it. I mean, it's like that lady spider disappeared immediately into a parallel universe.
Still haven't seen it.

I swept the porches and tidied up my mask-making area a little bit. I swept the hallway and kitchen and did four loads of laundry including the rugs. I cleaned a window sill.
A window sill.
This was all quite leisurely, I assure you.

When I was done I decided to go to work on my pile of overalls with buckle problems.
Some buckles lose parts of themselves rendering them unusable. I generally just pin the problem up with an old ducky diaper pin which should probably be in a museum but quite a long time ago I did buy some spare buckles at the fabric store and have never gotten around to fixing more than one or two pairs so I sat down at the sewing machine and let me just tell you- I couldn't figure out how to thread an overall strap buckle if my life depended on it.
I finally went to Youtube and found the most simple video ever (with catchy music behind it) and it still took me at least forty-five minutes.
I am the opposite of whatever an engineer is.
I can make a lovely white sauce with my eyes closed but don't ask me to thread an overall strap into a buckle. And if you're ever on Survivor with me and it's time to do one of those giant puzzles, please don't put me on the team. We'll be going before the tribal counsel that night.

Anyway, I could say a lot more about what I've been musing on today and so on and so forth but it's getting late and I need to make supper. I think my husband may be very hungry because he's been working hard all day long.
Nothing leisurely about the way he goes about things.