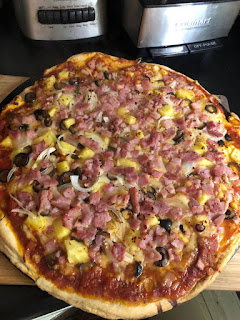 So that was last night's pizza and the last of the ham that we'll be eating for awhile. Mr. Moon's favorite is pineapple and ham and although some people think that pineapple on a pizza is akin to apostasy I am not a member of the pizza religion so it's okay in my book. Plus, it tastes good.
Salty ham, sweet pineapple. Ain't nothing wrong with that. Throw in some black olives and onions and it's meal. Well, with a salad. Of course.

This morning we woke up to a rain-soaked day. And it continued to rain a little bit, on and off. Mr. Moon set up his vacuum packaging equipment and made up packages of the rest (most) of the ham and now it's all safely out in the freezer where I'll be forced to make an effort if I want some. After the Great Ham Storage Project we decided to watch something on TV. We almost never, ever watch TV during the day but since it was raining...
We finally settled on The Wire which neither of us has watched but which I've wanted to see for a long time if for no other reason than the fact that Terry Gross seems to love that show above all others. So we watched two episodes and it kept our attention for sure and I can see how this is going to lead to all sorts of stories and surprises and we'll keep watching it.

After two hours of that Mr. Moon went back outside to do a few things in the garden including uncovering the just-sprouting row of arugula that he accidentally covered up yesterday with some of his plant benches. He honestly had not seen the tiny seedlings but I was upset and he made it right. Now he's working on the gate, making it close better to keep out the marauding chickens from next door who like to get in there and snip, snip, snip away at everything they can get their beaks on.
A little while ago he came in the house and started running the water in the sink which I know by now means that he has injured himself.
And he had, somehow puncturing a thumbnail with a screwdriver.
Oh, Lord.
It's not so bad though and he washed it and I bandaged it up and gave him a piece of buttered banana bread which had just come out of the oven and that fixed him right up. He's back at it as we speak.

So yes, I made banana bread as per request from my husband and I also made up another batch of pimento cheese. The man is going through that stuff like crazy.
A little laundry, a crossword, too much time on Facebook, some TV, kitchen sweeping, sink cleaning- it all adds up and when I looked at the clock and saw that it was after five I was astounded. How could that be?

Here's what the teen chickens looked like a few minutes ago when I took them some carrot tops. 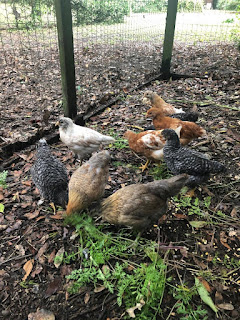 They rush me now when I come into the coop, knowing that I'm bringing food. The barred rocks (black and white ones) actually peck at my toes and when I took them some grapes earlier, a few ate from my hands. Some are always shyer than others and it does seem to go by breed. The littles are good and I gave them grapes and greens as well. It won't be too long before those bigger ones get to go out into the big world and hopefully, will become, if not part of Liberace's flock, than at least compatible with it.

Jessie sent me some pictures of her and the boys today. Here are two of them. 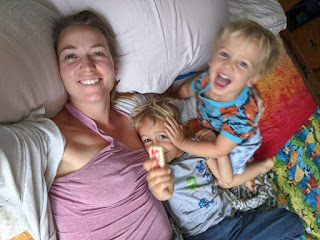 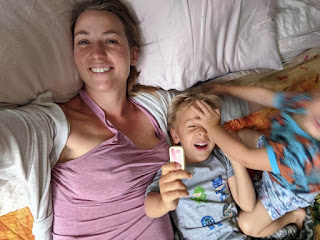 It would not appear that they are languishing for my love.
Sigh...

As to another subject- Hank's trivia packages which a few of you have asked about. He's online but only on Facebook. Here's a link to his trivia page.
There's a nice write-up on that page which you can find here.
I am so proud of him. Instead of just folding his tent and slipping away into the night when the bars closed where he does his regular trivia, he figured out a way to keep doing what he loves and make a few bucks at the same time. I know he misses being the guy at the mic and he's very, very good at that part but this is good too.

So. Although the bloody dictator shithead orange intestine idiot narcissist flatulent toilet-paper dragging lying son of a bitch gold toilet shitting illiterate piece of what swamp animals defecate when they drink the lowest layer of algae and rotted remains of turtle crap water excuse for a human being is not only still the president but also alive, and although Netflix still has no idea who I am, it did rain and it is nice and cool and I will be able to cozy-up under the duck for at least two more nights this year. This makes me happy.

We shall see where all of this leads me tomorrow, emotionally speaking. I did have some hours of sadness today but I have cheered up and once again- I am grateful for that.
I better go make tonight's supper which I believe will be a small shepherd's pie. I make this in honor of Keith Richards who requires one to be sitting on a warmer in his dressing room before he goes onstage so that when he is done with a concert and finally gets hungry enough to eat, it will be there. And everyone knows not to bust the crust, as he says because the man may be older and more mellow now than he was back in the days when he threatened to get rid of Donald Trump but he's still Keith Richards and he probably still has a knife.

Be well. Stay safe. Stay home. If you can.