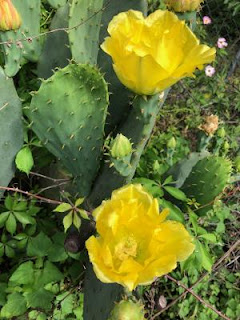 I took this picture on my walk this morning. It's from a neighbor's yard, right outside his fence. Beautiful blooming cactus. You can't see but there are also luscious looking purple fruits and I know you can eat these but I never have.
Walking was about the best thing I could have done. It made me feel so much better. And indeed, I have been almost lighthearted today, letting things flow as they will. While I was on my walk, Vergil called and asked if it would be all right if he brought the boys over to pick mulberries. He was on Dad duty as Jessie had some work-related issue to attend to and they'd been to the park but he wanted to keep them out of the house a little longer. Of course I said they could come pick mulberries and I was so happy to see them although seeing Levon, especially, is incredibly hard for me. He just has NO idea what's going on and I can see it in his eyes as some of you also saw in some other pictures I posted awhile back.
But they were happy to scavenge the last of the sweet, black berries off the tree and then climb up onto the tractor. 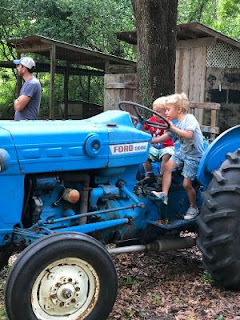 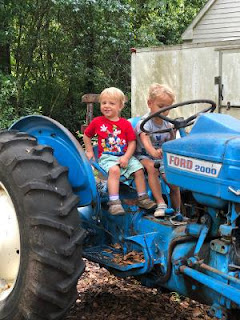 And THAT made them happy. Vergil and Mr. Moon discussed (across a distance) things like other tractors and front-end loaders and bucket trucks and what all they could do with such machines. It's no wonder that Levon is obsessed. He comes by it naturally.
I asked the boys what the Easter bunny had brought them.
"SO MANY TREATS!" said August.
Levon agreed that this was true.

Just as they were getting ready to leave, Lily pulled up with her crew. She was picking up a few masks and some eggs and books. She had asked me if I'd lend them some as the kids have tired of all of theirs and I joyfully packed some up for them to take home, wishing with all of my heart that I could be the one to read them to the kids. Well, Gibson and Owen can read just fine but I still love to read to them. Hell, Mr. Moon can read just fine but I love to read to him too. 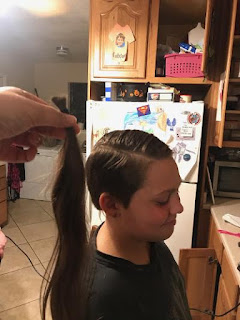 But it was a trick! This is what it looks like. 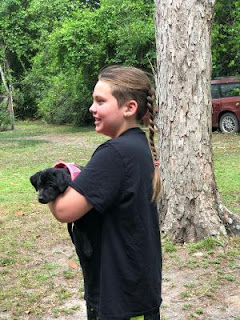 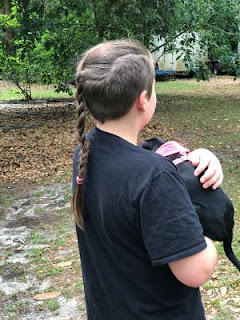 He loves it. Lauren did a great job, I think. He told me that when this is all over he wants to bleach the short part and then dye red and black stripes in it.
You have no idea how much this charms his old hippie Mer-Mer. 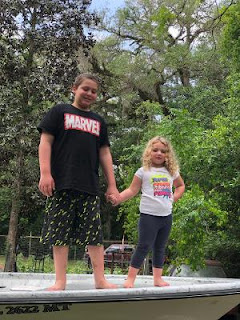 Playing on the boat. Being at Mer and Bop's is sort of like having one jungle gym after another. Isn't Maggie getting big? Little Ms. Sassafras. It makes her very sad not to be able to hug us. She runs up and then stops, remembers, and gets the most crestfallen look on her face.
Damn, I hate this!
I didn't get one picture of Gibson. I'll do better next time.

After they all left Mr. Moon went and picked up some lumber that someone had dumped on the side of the road. This was another thing that he and Vergil had discussed because Vergil had noticed it on his way over. My husband was so happy to get these nice boards for free. "I can make a lot of shit with this wood!" he said.
And he will.
Right now he's working on some sort-of-like bench platforms to set the pots of eggplants and peppers on in the garden. I think this is going to be amazing. So he's out there sawing and hammering and probably about as happy as a man can be.

I repotted a large-ish avocado tree today because it was in an entirely too small container. I realize now though that I should have put it in an even bigger pot. Maybe tomorrow. I set it on the back porch steps where I can look at it many times a day.

And I have pinto beans simmering with some ham for our supper. That is exciting.

We have some very sad chicken news. Last night one of the babies drowned in their waterer. I had switched over to a bigger one when I moved them outside, figuring that they were too big now for that to happen. But they all seem to want to pile up together at the end of the little coop where I had set a flat stone for their food and water and I guess one just got caught under the press of the others. Still, out of eighteen, we have seventeen and that's not bad. But I wish it hadn't happened and I've given them back the small water bottle and placed it in a different part of the enclosure.
These things do happen. 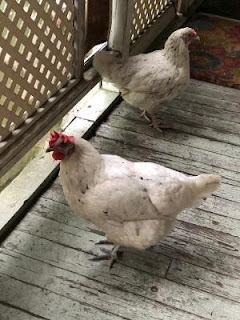 Liberace was right there on the steps outside the doors.

When I gave the teen chickens some greens yesterday, I noticed that they were all tearing into them like hyenas on a fresh springbok kill except for one who was standing away from the fray, just looking outside of the coop. For all the world he or she appeared to be observing and thinking about what he/she was looking at. It was an interesting moment for me. I never tire of my own observance of, and thinking about my chickens.

A few roses I picked. 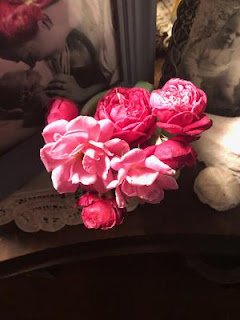 They are almost too delicate to bring into the house but they are so aromatic that I couldn't not do it.

We got some wild weather this morning early, early with great crackings of thunder and lightening and then rain for awhile. Today was cooler and if the weather widget is to be believed, we will be getting rain for a week.
Sometimes I think about hurricane season coming up and that is definitely one of those thoughts I just have to push away. But for now, we need the rain and it will bring coolness.

For this moment, I am at peace and content. I am grateful and I am aware of the inordinate amount of sweetness and grace in my life.

Thank you for being part of that.