My husband got up at 3:30 this morning to get to the airport in time to make his six o'clock flight to Las Vegas. Before he left he set the coffee to brew for my awakening and wrote me a beautiful little love note. He has written me these notes for years, almost daily. Some of them just say "Kisses!" and some are more wordy but I cherish them all.
He is such a good man.
I am such a lucky woman.

When he left the house, Maurice came and got in the bed with me. She hardly ever does that, Jack being the one who claims that privilege most nights. I was so surprised that I rubbed my hand down her back and tail to make sure it was truly her. She is a much smaller cat than Jack and she likes to curl up on my hip unlike Jack who either lays himself right beside me or down at my feet where he pins me to the bed with his big chunky body. It was indeed Maurice and I fell back asleep, glad for her company.
Yesterday when we were riding to town, Maggie told me that she would buy one of my cats from me.
"Oh really?" I said. "Do you have any money?"
"No," she said cheerfully.
"Do you want to buy Scratch?" I asked her. Scratch is what she calls Maurice for obvious reasons.
"Oh, no!" she said. "I want the black cat."
Jack is actually gray and white but I knew what she meant. Lily and I giggled at the way she'd said, "Oh, no!" like a full grown lady who'd been asked if she ever went to strip clubs.

I didn't get up until after eight-thirty and drifted about for hours, doing almost nothing besides chopping up grapes for the baby chickens and making and eating a rather huge and delicious breakfast. It was, in fact, so huge that I haven't eaten anything since then except for a few crackers with hummus but the omelet I ate for breakfast had spinach and peppers and onions in it so at least I have eaten some vegetables.
Sort of.

In the early afternoon I tried for about forty-five minutes to accomplish something online that I simply could not do. Every time I got to the "Go to check-out" message and clicked on it, it would  return me to the screen which I'd already filled out. Finally I gave up and tried calling the business. I am being vague here because this may involve Hank's birthday present. Every fucking phone number that was listed for contact gave me the message that my call could not be completed as dialed or else that this number is not in service, followed by a most inappropriately cheerful "Good-bye!"
I finally emailed someone there and got a fast return which said their internet and phones were down along with an apology.
Ah, no big deal. I'll try again tomorrow.

And then, because I am constitutionally unable to lie about and binge watch anything or even read, and because cleaning out closets sounded dreadful, I decided to go work outside in the 97 degree weather but it wasn't so bad, really. I planted some zinnia seeds and then I started pulling some of the Gee Dee crocosmia and trimming sago palms. 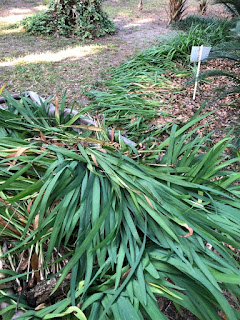 This is a terrible picture but what you see there in front is a full Rubber Maid garden cart filled with the little fuckers. You can see that there's still a lot of them I didn't get pulled and that's only a few of the millions I didn't get pulled but I've made a start.
So my hands ache and I have little itchy sore places where the sago needles pierced my gloves and thus, my skin but I'm still alive and the heat didn't kill me and I got started on a much-needed project. Not that pulling those plants will have anything to do with them not coming back again next year. They will.
And that is not the only place in the yard that they've taken over.

Gosh. This has been a pretty bitchy post, hasn't it? And weirdly, I'm in a fairly fine mood. I've had my shower and am going to make my supper and finish watching the Wanda Sykes stand-up special on Netflix.
Can I tell you that Wanda Sykes is a gift on this earth? I purely love her.
I do believe I may have discussed this before.
Oh well. It's true love.

And Mr. Moon made it to Las Vegas and last I heard, he and his sister were driving through the desert on the way to St. George, Utah where they'll be staying for two days before they go back to Las Vegas. Last night I told him not to do anything in Vegas that needed to stay in Vegas. I meant it too. I wonder why I didn't tell him not to do anything in St. George, Utah that needs to stay in St. George, Utah. I suppose it just seems obvious that it's harder to sin in Mormon country than it is in Sin City. Still, perhaps I should have added that admonition, just for safety's sake.

Oh! I picked my first tomato today!
Here it is! 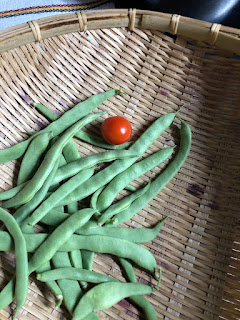 I hope it's not my last.