I woke up this morning dreading going to check on the little one and my fears were justified. The poor thing died in the night. I buried her in the little garden bed beside the kitchen door where her kinfolk spend so much time, clucking over and pecking the kitchen scraps I throw out for them under the bananas.
It was sad, that sweet little body so still and lifeless but if one has chickens it's just not a good thing to get completely wrapped up in any one of them, newly hatched or older.
As we all know by now.
The rest of the chicks are fine with no more of the eggs showing signs of hatching. I am going to toss the remaining four out tomorrow if there is no activity tonight. Mr. Moon and I just went out to see them and I told Darla, "Well, you killed your child."
She was completely unconcerned.

So I did an odd thing today. For me. May's birthday is coming up in two days and I went to town to shop for her a present. And I actually rather enjoyed it. May asked for presents this year that will make her feel pretty. I sure do understand that. She also said that no one had to get her a present at all and it wouldn't hurt her feelings but hey! She's my baby. So I went to a place that sells pretty-making things and I won't go into it because she might read this but I literally spent an hour walking up and down aisles and I didn't get stressed out at all. I'd stopped into an Old Navy before that and ended up getting all my toddler grands each an outfit on major sale. Little shorts and shirts for all. Now THAT got sort of stressful. Do you KNOW how many different T-shirts Old Navy has for little kids?
Hundreds.
And after all of that I went to another store where I swear to god- I came THIS close to buying another purse. I am still in the honeymoon phase with the last purse I bought but this one was so soft. SO soft. And smooshy. My favorite. And it was a backpack bag. Which I have NO NEED OF WHATSOEVER and yet, how I wanted it. I could envision buying it, bringing it home and hiding it in my closet. Hiding it from myself because my husband certainly wouldn't mind. I imagined how I'd feel with a tiny spark of knowing that there was a brand new, completely squishy lovely bag in my closet, just waiting for me to determine it was the right time to use it. And it was on clearance!
Somehow, though, I managed not to buy it. And no, I didn't steal it either.
Sigh.
By the time I finished up all of this shopping, it was after three and I had not eaten lunch. I thought about going and getting a sandwich somewhere but I kept thinking about the tacos we had last night that I made with that fresh ham that I'd roasted in banana leaves. They may have been some of the best tacos I ever ate and I am not kidding. I marinated that meat for twenty four hours and then wrapped it and the marinade in banana leaves from one of my plants and then in aluminum foil and cooked it in a very slow oven for hours and hours and by the time I unwrapped it yesterday it was so tender that shredding it could have been done with spoons. It was completely unlike farm-raised pig in that it had almost no fat to it and yet, it was as juicy as could be. I mixed up the shredded meat with a sort of sauce I'd made with chili's and lime juice and tomatoes, cilantro, and a little vinegar and it looked like this. 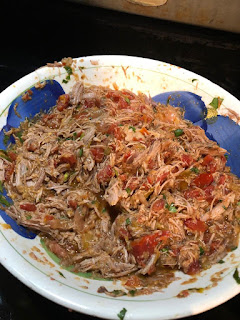 I did a quick pickling of some finely sliced cabbage and red onions and heated up corn tortillas. The meat, the pickles, some avocados, and a little sour cream were the whole deal and we ate those tacos like we were in Mexico.
Seriously, they could hardly have been better.
And so I wanted more of them for my lunch and I came home and had some. It was worth the wait.
And if you can't tell, I'm sort of proud of that meal. I am not sure I've ever used banana leaves in my cooking before but I'll be doing that again.
And quite frankly- I'll take all the small wild pigs you bring me. In case you're wondering, there really is no such thing as a "wild" pig. Not around here, at least. They are actually ferals who have descended from escaped domestic pigs and they are considered to be a nuisance animal as they are not native and they do cause a lot of destruction to the native habitat of the indigenous animal population.
Obviously, I have meat-eater guilt. At least I admit that.

And one more thing- today is the 12th anniversary of the very first post of blessourhearts. I want to say that for twelve years now I have been so incredibly lucky to be able to write out my thoughts, to record births and birthdays and marriages and accomplishments and troubles and joys and gardens and chickens and insanities and Mexican sunsets and friendships and yes, even deaths of people whom I have loved tremendously. Not to mention recipes and household hints. This is a place where I've been allowed (by me!) to be profane and blasphemous and to share what is holy in my heart.
And the community of YOU has sustained and comforted me, educated me and made me laugh for twelve years.

Thanks, Hank! You told me to do it and I did.
As always, my children are the boss of me and that usually turns out for the best.

I love you dearly.