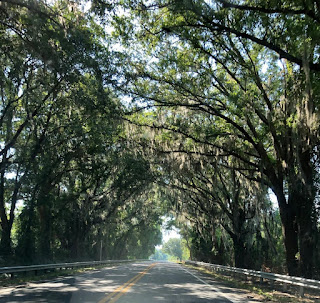 Beautiful canopy archway on the road to the Wacissa.

Well, today was pretty much a rinse, repeat version of yesterday although I did actually leave Lloyd as you can see from the picture above.

Got up, lazed about, chopped grapes for chicks and made a breakfast although I didn't like what I made very much and gave most of it to the hens. Then I pulled on my filthy overalls and gloves and got back to work outside. I trimmed the sagos back a bit more and pulled the rest of the wretched crocosmia in the area I was working in yesterday by the front porch. I moved on from there to an area in the backyard and cleaned it up. 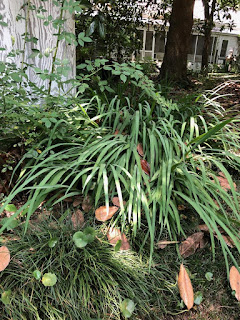 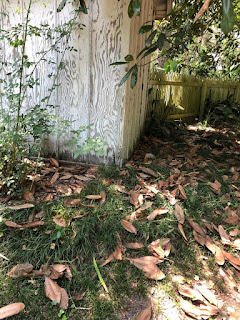 And that's about one one-hundredth of what I've done. Let's put it this way- there is now a huge mound of the damn things on the burn pile. I have no idea what has motivated me to start this task now. I think it was even hotter today than it was yesterday. While I was out at the burn pile I noticed a bunch of leggy, raggedy volunteer tomato plants growing up through some bamboo that Mr. Moon cut and which is also going on the burn pile eventually.
I think.
And these plants may be scraggly and they may be raggedy but look here- 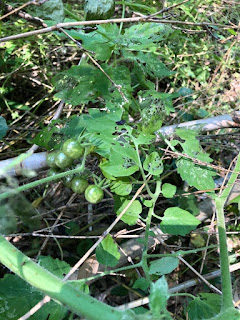 They're growing some nice tomatoes!
I texted Mr. Moon and asked him if he knew how they got started out there and he had no idea. I also don't know how I haven't noticed them before today. God knows what else I'm missing around here.
I'm not missing the maturing figs though. 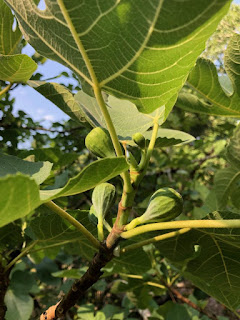 SO many figs on my tree right now. I am still grieving the loss of the giant oak which came down in Hurricane Michael but without it blocking the light, that tree has just exploded.
I know I say this every year but I would really, really love it if the squirrels and birds left me enough fruit to make preserves with. I want to send some to Ms. Radish King! Nothing would make me happier.
And while we're discussing figs- sometimes I can barely look at that particular fruit without blushing. They are just so very...male.
Are they not?

After I'd finished all of the crocosmia pulling I was willing to do, I decided that yes, I would do what I had been thinking about doing all day long which was to drive to the Wacissa and jump in. I realized that this was probably ridiculous and that there would be so many people there but it was almost like a personal challenge to myself. To put on a bathing suit and to drive down there and to get out of my car and jump in that river and feel cool and clean and then to come home.
Good plan, right?
And so I took off my filthy clothes and put on my bathing suit and drove to the river where I discovered that cars were parked all the way up the road to the You-Pick blueberry place although I did find a FOR (front of river) space to pull into. There were so many people 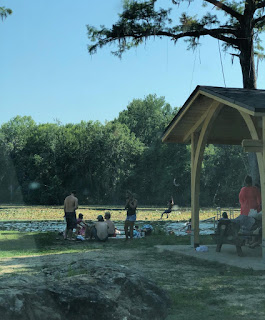 that I almost just drove on through the parking lot and headed home but GODDAMMIT! no. I was there. I was going to do this thing. And honestly, no matter how many people are at the Wacissa it's just not a place that instills anxiety in me. Not only is it a holy place and thus, all are protected, including me, I have my old-lady super power of being invisible. So I got out of the car and piled my towel and shoes and glasses on the ground and pulled my dress over my head and in full invisible view of everyone, strode down to the steps to jump in where I realized that my beautiful clear river had been so churned and agitated by the huge number of Jefferson County's Memorial Day weekend celebrating citizens that the water was, quite shockingly, brown.
Ugh.
Oh well. It was still cold and I knew that the brown was just the result of the kicked-up silt from the bottom and I dove in and it felt wonderful and then I got out and came home.
And I'm glad I went. It's always interesting down at the Wacissa. So many different sorts of people. Lots of inked people today. One guy who was pale as milk who had white-blond hair that he'd gelled straight up with tattoos covering at least 70% of his body, a black guy who was also inked, carrying a jon boat with a friend. Tattooed mothers, tattooed fathers, tattooed teens. Hell, I wouldn't have been surprised to see a tattooed toddler or two. There were also folks who were there to kayak or boat wearing appropriate kayaking and boating attire. Grandmothers and babies with sun hats. Kids lining up to swing out over the water and do fancy tricks before plummeting into the river. People with picnics, people with beers. One little boy, probably about Owen's age, stared at me as I went down the steps to get into the water. I stared back. He was crouched down so that only his head was showing above the silty water.
"What?" I asked him as he watched me so closely. (I guess I wasn't entirely invisible.)
"I'm so small," he said.
I had no reply to that so I just said, "Huh," and dove in.

So now I'm home it's still hot as hell. I went out and picked my salad for tonight. 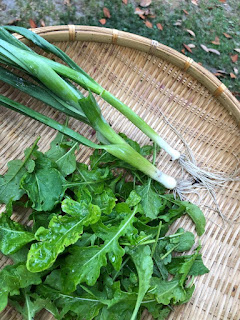 Baby arugula leaves and two small leeks. I'm in a minimalist mood, at least as applies to salad.

Not sure what tomorrow will hold for me. I'm not worried about it. Still plenty of crocosmia to pull. 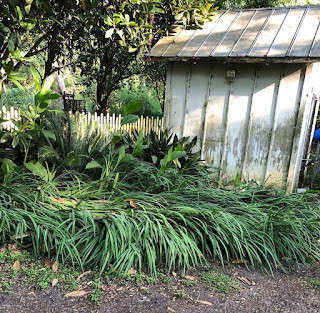 And that's just one more spot that it's taken over. Are you paying attention, Steve Reed?

Or, who knows? I might spend some time with grandchildren or I might clean out some closets or I might deep clean the kitchen or I might begin the process of making my very own sourdough starter
with some of the funky wild yeast floating around right here in Lloyd (although that does look like a lot of work and as much nurturing dedication as taking care of a newborn) or I might just channel my inner cat and lay about and hiss and spit at anything that threatens to disrupt my cat-Zen.
Okay. I probably won't do that.
And I probably won't go back to the river, either.
Not until Tuesday, at least. Or Wednesday. Give the river a chance to settle down.

I have no ending to this mess at all. I think the sun may have baked my brains.