Well, well, well.
I was just sitting here on the porch with a very noisy fan on AND the AC unit right beside me rattling and roaring away and yet I could still hear something coming from the direction of the hen house that I immediately identified and so I walked out there and yes, I was right. 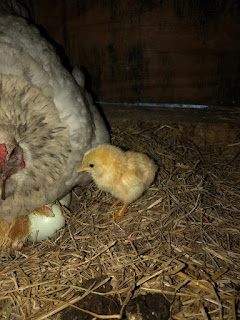 That tiny little puff of hardly anything was on the ground, fallen out of the nest, I guess, and was making her MAMA COME GET ME! WHERE ARE YOU? SAVE ME! peeps which are about ten times louder than anything you could imagine coming out of a being that small.

So. Here we go again.
And what to do?
Right now I can't do much because Darla's sitting on those eggs as they hatch and I can't move that process. She's already distressed because her baby fell on the ground and I picked it up and she almost attacked me but I quick, quick handed it back to her and Darla quick, quick flew back onto her eggs. One other has hatched but hasn't puffed out yet. Can you see it there, under Darla on the green egg?
But should I try to get them all into a baby coop tomorrow and thus, try to keep them safe or do I just let Darla take care of the whole situation the way Dearie did? She kept all ten of hers safe for a long time and it wasn't until she started sleeping in the tree with them instead of the nest that any of them died and then they all died except for Clara but I will admit that the rooster brothers did not die of natural causes.

Oh Lord.
And oh dear Kathleen! When you brought me those baby chicks and a bag of chick-starter feed all those years ago I had no idea how that simple little gift would change my life.
But it surely has.

Mr. Moon went fishing out on the gulf today and he came home exhausted. He wore his overalls and a long-sleeved shirt and a hat that covers everything AND he got up at four a.m. I don't know how he does it. Hell, I don't know WHY he does it. He must love fishing, I guess.

I went down to the river this morning and met up with Lily and Jessie and all the grands. Jessie and Vergil had planned a paddling/camping trip with some friends and while Vergil had gone to leave the tent and camping gear at the camp site, Jessie and the boys stayed at the river. 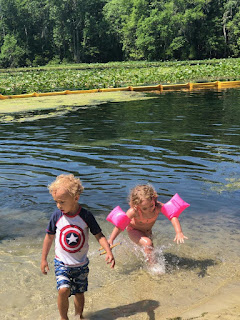 It was beautiful there today. The kids played and the mama's chatted and gave out snacks and I wish I was back there right now in that cold water.
After awhile, Lily and her three had to leave and Vergil arrived and the kayak was loaded up and I waved them all off on their little ten-mile journey which was supposed to take about five hours.
Those are some brave people. 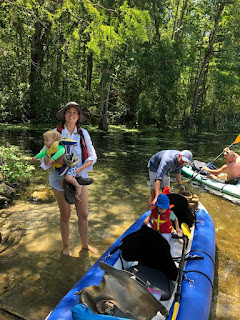 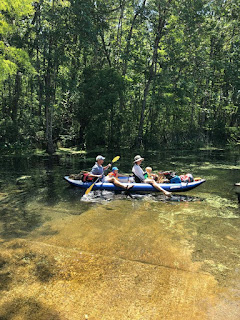 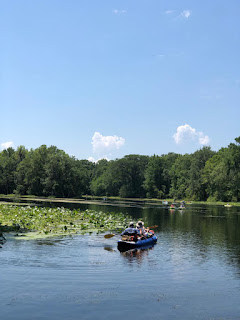 I love how they're giving August and Levon these adventuresome experiences. The boys were so excited. Levon cried when August got to get in the kayak before he did. He thought he wasn't going to get to go.

I dunked my body in the water one more time before I left. I have a feeling we're going to be spending a lot of time at the river this summer.

I'm going to make risotto for our supper which means I'll be standing at the stove stirring for about an hour but that's okay with me. I went to town earlier and bought fresh spinach and a bottle of cheap wine for the dish. In a minute, before I start cooking, my husband and I will go out and check the progress of the hatchlings. I still can't really believe I heard that tiny baby over the din of these rackety machines.
I'll report in tomorrow as to how the hatching went and if all goes well, there will be pictures of baby chickens which are about the cutest things on earth. They're a pain in the damn neck but they sure are precious.
This is the way of babies.