From The Annals Of Aging 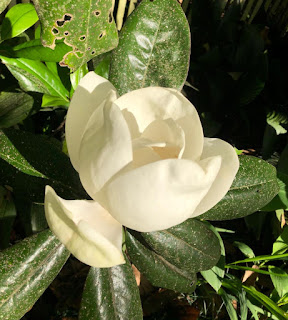 It's been a slightly unusual day.
First off, I had to go get my teeth cleaned and we all know how much I love going to any sort of medical appointment. I don't usually get too stressed about these every-six month appointments. Knock wood but except for one rather major problem I had with a tooth a few years ago, I am generally found to be fine in the dental department.
So why worry at all?
Uh...insanity.
Also, I made the mistake of accepting a friend request from my dental hygienist (I've discussed this before) and well, let's just say that it would be best for all concerned not to discuss either politics OR religion with her and I don't. We talk about our kids and our grandkids and that's fine and sensible because she has sharp and pointy objects which she uses in my mouth.
So all went well there and then I drove over to Mr. Moon's office where he helped me sign up for Medicare.
Ooh boy.
You know what that means, don't you?
It means that in two months I'm turning sixty-five years old and that's blowing my mind. I know this is exactly the wrong attitude but it's sort of embarrassing to be sixty-five. I mean, in our culture. How in the world have I allowed myself to get this old? It almost seems that if I had tried hard enough, done the right exercises- especially yoga of course, eaten a pure and non-toxic diet with a heavy emphasis on raw foods, drunk sufficient quantities of green tea instead of vodka, meditated, used the right cosmetics, stayed out of the sun, and of course mostly HAD THE RIGHT ATTITUDE! I never would have had to suffer the indignity of turning such an advanced age. I could have stayed right there in the middle of my forties, my favorite decade, or even in my fifties which wasn't that bad either, come to think about it.
Of course, DEATH would have prevented all of this too but that's another subject and I'm not feeling especially suicidal today.
You know what I hate? I hate it when people say really stupid shit like, "Seventy is the new forty!"
No it fucking is not.
I'm not seventy yet but I can already tell you that it's going to hurt more when I am than now and everything hurts so much more now than it did when I was forty that there's no way I could confuse the two ages.
AT ALL.
Plus, I was hot, hot, HOT at forty.
I really was.
Not as hot as this lady. 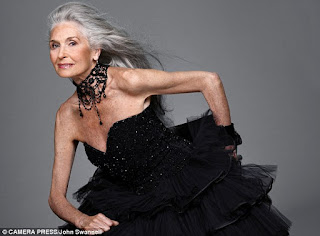 Who is eighty-three years old! I was never as beautiful as she is and I'm surely not getting any closer now.
Go google "beautiful older women". First of all, about seventy percent of the women pictured are Helen Mirren.
Great.
Secondly, a great many of these "older women" are like in their forties or fifties.
Thirdly, THEY ARE ALL SKINNY!
So, to be considered beautiful even in our older years, we still have to be thin.
You know why I used to be thin?
Because I obsessed about it. My entire life. I spent way too much time dealing with diet and exercise and denying myself foods that I loved up until a few years ago at which point I just lost interest in all of that.
I still exercise and I am active and I try to eat a pretty good diet and I think I do but I have given up my eternal vigilance in the matter and I'm paying for it by becoming someone I don't want to see in my mirror.
But guess what?
Cheese is awesome.

Anyway, what in the hell was I talking about?
Oh yeah. Today.
So it isn't that hard to sign up for Medicare. I promise. But please don't think that you can just sign up for that program and never have to worry about paying medical costs again once you get your card.
That would be folly.
Nope. You have to get SUPPLEMENTAL insurance to cover what Medicare won't.
Haha! Surprise!

Anyway, I signed up so the process has been set in motion.

And then I took myself to lunch and that was so disappointing. I won't go into it except to say that why some restaurants manage to survive for decades despite horribly mediocre food is proof that Americans really don't care what they eat.

As you can probably tell, I am in a better place today than I was yesterday. At least I have been since I got out of the dentist's office clutching my little bag with tiny tubes of toothpaste, tiny plastic dispensers of dental floss and a new regular-sized toothbrush and especially after the half of an Ativan I had taken earlier really kicked in.

Also? I went to Goodwill and the polyester trend seems to continue but I did get eight beautiful snowy white linen napkins which I am sure were never used. I'll use them. You can bet on that.

Oh! Do you like that magnolia in the picture up top? Isn't it gorgeous? Isn't it just magnificent? I think it is. Also, it's blooming in my very own yard.

You know what the best thing about getting your teeth cleaned is? You don't have to feel guilty about not flossing that night.
Well, I don't anyway.
It's the little things, people.
And cheese. Always cheese.
Trust me.