I am miserable today. Just purely miserable. This heat is already overwhelming me. It's not even June yet and I'm not seeing how I am going to last the summer unless I spend most of my time indoors which is a little bit like being in prison for me. A beautiful prison but still- I am NOT an indoors-all-the-time person. I'm not what you'd call an outdoor woman. At least not in the sense that I like to hike and cycle or whatever it is that outdoor people do. I just like to mess around in my garden and in my yard and hang the clothes on the line and take my little walks and that sort of thing.
Which I am not tolerating as well as I used to.
It got up to 95 today and is supposed to be at least 99 this weekend.
And the GODDAM yellow flies are absolutely the worst this year that I've ever seen. I got bit on my ankles and feet today and the bites swelled up and itched and it's a sort of itching which drives me to just this side of madness. They are such fierce fuckers and when I slap them, they bleed my blood like mosquitoes but the difference in being bitten by the two insects are vast.
I think I probably post this picture every year. 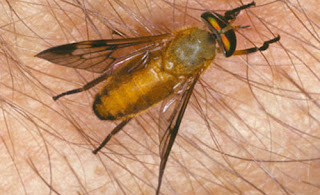 This is what they look like. I always say they resemble B-52 bombers and I don't know if that's true but the way they fly so stealthily and land and start to suck and sting before you even know they're there does indeed remind me of warfare. They are also incredibly nimble and able to escape a human hand intent on smashing the life out of them.
In other words, I hate them.
There are few things in life that make me more apt to curse and cry than being very, very hot and having big knots of yellow fly bites itching me to distraction.
And so it went today.

This morning I noticed that another one of the eggs in Darla's little coop had a tiny hole in it with a little beak trying to break the shell to free the chick attached to the beak. I was cheered by this and checked the progress all morning and I could tell, eventually, that the chick was a dark colored one, unlike all the rest. Of course, Darla has been sitting on eggs that were laid not just by her but by her sister hens as well and the chances of getting a brown or black chick were good. I think that this egg was laid by Big Mama who is black and white but mostly black. I merely took note of this as an interesting fact but when I went back to see how things were going a little while later, I found the just-hatched baby with its down still matted and Darla was pecking the shit out of her. Or him.
I watched in horror and then quickly picked the chick up and brought it in the house and set it in a large bowl lined with a dishtowel and covered it up with another and put it in my bathroom which is far warmer than the rest of the house because the vents into that room have been torn out by some creature.
Probably an armadillo or possum.
I had to go to the store and so I did and when I got back, the little one was still just huddled in the folds of the cloth, still matted from the hatching, not really moving but able to peep loudly if I touched it. 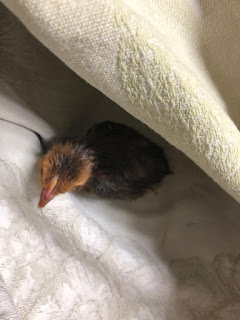 After I put the groceries away I made it a better shelter in an ice chest with a heating pad set on warm covered with two towels and with food and water available.
Y'all. I don't think she's going to make it. I think that she is perhaps too badly injured. She is just lying there, not even trying to get up.
Nature can be so cruel.

I researched this issue on the internet and it is not uncommon for a mother hen to peck (and kill) a chick who is sickly or who is a different color than the rest. I suppose that this is an evolved behavior which helps to protect the genes of the mother and to make sure that there is more food available for what she perceives to be her own offspring.
Who knows?
Certainly not me but it's sad.

Meanwhile, the other five chicks are fine and fluffy and doing what chicks do and Darla is still being incredibly protective of them and still sitting for periods of time on the other eggs which have not hatched.

Add all of this together- the heat, the yellow flies, the chick abuse- and I'm just, as I said, fairly miserable. Owen has a baseball game that I should be attending but I swear to you, I would die if I had to sit outside for two hours.
Okay. Maybe not die. But close enough.

I just went and checked on the little one. She is more fluffed and puffed and she has pooped. These are good signs, I think. I stuck her little beak in the water but I don't think she drank any.
Time will tell.
And just watch- I'll save that little bitty biddy life and it'll turn out to be a rooster.
Still- thoughts and prayers, people, thoughts and prayers.
Just kidding.
But I think that if this one lives and it does turn out to be a rooster, I'm gonna name it Keith.
And if it's a hen, I might name her Keithalina.

Hoping for a better tomorrow.