Short And Sort Of Sweet 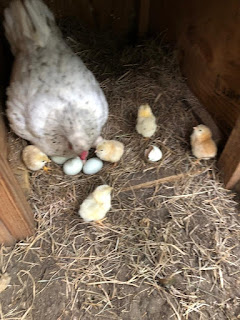 Went out this morning to discover that once again, I do not know shit and one of those eggs was a good one and I had five little chicks whereas yesterday I had four. Not a great picture but I was trying to get all five babies in the shot. Anyway, I'm giving the rest of the eggs a few more days. I'd hate to murder the unborn.
(Eye roll.)

Here's the most interesting thing I saw on my walk this morning. 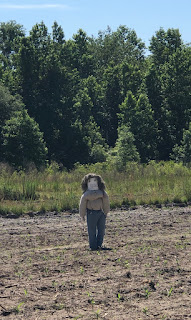 Now THAT'S a scarecrow.
She'd scare me, at least.

A little after lunch, Jessie and Vergil and the boys came out and Mr. Moon came home from work. Vergil had generously agreed to help my husband with the electricity situation for the dryer and he did. The boys liked the baby chicks. 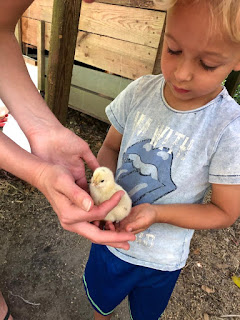 I asked August what we should name this one and he said, "Dixie" which is the name of one of Jessie's chickens but Dixie Chick is a great name and there's plenty of room in the world for at least two of them. So Dixie she shall be. I swear, Darla does NOT want me to pick up her babies. She pecks me aggressively.
I don't really blame her although you'd think that by now she'd know that I am not much of a threat to her or her babies.

After the electricity project, the men moved on to a boat-steering project. What I had thought was going to be a two-hour max situation has turned into something else entirely which is fine. I wrapped up my pig roast in banana leaves (yes, really) and aluminum foil and put it in a ceramic crock in a very slow oven and that's cooking but it's not going to be ready for a supper so I'm improvising with other leftovers to create an entirely new menu item which will serve four adults and two children. Luckily, that is my magic talent.

Levon's magic talent is playing ball on the steps with his mother. 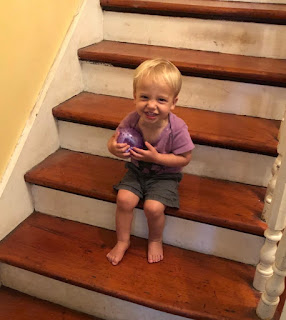 I spent so many hours with Owen doing that same thing.
August and I have read books and we've all played outside but had to come in because it is buggy and hot as hell.

So that's the quick report.

Oh! Here's a beetle I found in my library today. 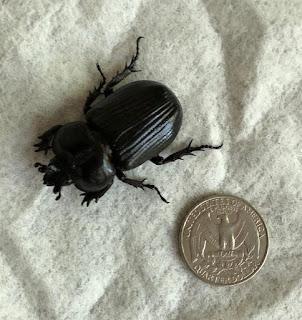 You know, I've seen some large beetles in my life but that one sort of astonished me. I wrapped it up in that paper towel and set it outside. The chickens came to examine it and a few actually pecked at it but it was too big for them.

Florida. Such a great place to live.