This Is Not Cheerful And It's Not Funny In The Least

I've got a soup of white beans and parmesan rinds and onions and fennel and garlic and celery and kale and collards simmering away on the stove right now. It's yet another NYT's recipe and I guess it'll be okay. I don't know.
Not really sure how anything can be okay right now.
These anti-women laws that some states are passing are fucking with my mind. What is wrong with us as a society that we allow these goddamned white men to pass laws that they not only do not understand but which are cruel and hateful towards women and which will surely lead to the deaths of women if the courts don't shut them down?
And how can women have allowed this to happen?
I heard a woman today on NPR saying that she's been pro-life and on the front lines of trying to end abortion for years and that this is all a great victory.
A great victory.
These people saw Trump's win in 2016 as their chance, their shot, to finally load the courts with "their" people, judges who are as ignorant and as short-sighted and as hateful as they themselves are. And it looks like their plan is working.
Almost every day I wonder how on earth so many Republicans can be so very cruel. Take the separation of families at the border situation- is there anything more despicable than that?
It goes without saying that the same people who claim to believe that a fertilized egg is a human being with rights refuse to see that once one of their precious zygotes gets born they still have rights. Rights like having health care and enough food to eat and decent child care and the right to not be ripped from the arms of their parents. And if they're female, the right to grow up and not have to worry about being forced to carry to term a baby conceived in rape or incest.
I mean, it would be great if no one had to worry about rape or incest but I seriously doubt we're going to be able to eliminate those any time soon.

What am I doing? I'm preaching to the choir.
Y'all know. Y'all know what I'm talking about.

And hey- let's go to war again. I swear to god- I bet you any amount of money that Donald Trump will not consider his presidency a true success unless he takes us to war. You just know that's the truth of the matter. He's a bully and he's the bully with the biggest military in the world. You think he's going to let that opportunity go to waste?
Fuck no.
He is not. The man who of course never got within a continent's distance of actually having to fight in a war is probably panting with the anticipation of putting hundreds of thousands of other mothers' children in harm's way.
And mothers.
And children.

Yeah. Well. Hey.
Got that soup simmering.
Probably going to make some cornbread. 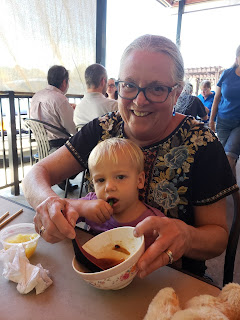 There's one reason.
My baby. Your baby. Our babies. Their babies. The ones who are already here, the ones who are just a gleam in the eyes of two people in love.
All the babies. I want them all to have the best possible lives. Which means that they have to be wanted. Which means that their possibly potential mothers need to have the right to discern whether or not that's even possible. Which means that no one but that woman has the right to decide. Certainly not some bullshit supposed "Christian" man who doesn't even have the most basic understanding of what pregnancy and childbirth and being a mother means.
Not in the medical sense, not in the economic sense, not in the emotional, spiritual or any other damn sense.
Sometimes I don't even think that these people understand what it means to be human.
Sometimes it is easier for me to believe that trees and chickens are more sentient than many people.
Always, I believe that a lot of folks have no concept of what love is. What compassion is. What respect is or what wonder is.

I should try to work on all of that myself. I know I do.

I bet our planet is too.