Grandchildren And The River 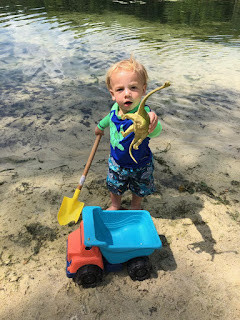 Now that is a happy boy. He has a shovel, a truck, and a dinosaur. He also has a nice beach worth of sand to dig in and water to splash in. He has a big brother to wrestle with and play with and to watch intently and learn from. His Auga. 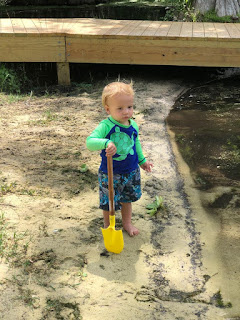 He has a mommy and daddy who are there for him every moment of the day and night and he has mommy-milk if he needs it and he is needing it less and less all the time.
Which is great!
And so sad, too.
He has cousins who adore him and aunts and uncles who do too. He has THREE sets of grandparents and he has Florida with its rivers and oceans and he has North Carolina mountains.
Yep. That little boy has it all and I am just loving watching him grow. He may be the last grandchild. I don't know. One never knows about these things but he might be. Lily did tell August today to tell his daddy that he wants a baby sister. Lily loves babies. So do we all. And dammit, they just don't stay babies long enough.
He can say Lily now. He calls her Ye-Ye which is what his mama used to call her when she was his age. He is learning all sorts of words and he can mimic almost any word. He has a good mouth for speech. 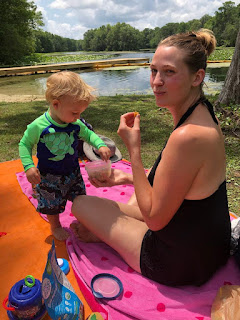 He can certainly tell you what he wants. He is getting to be as golden as his brother and I am as mystified by those boys' toast-colored skin as I am by August's curls. And as enchanted. 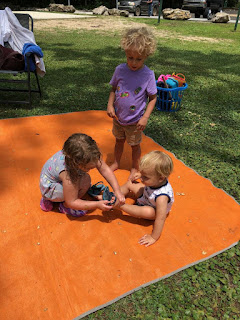 When we were getting ready to leave the river today Maggie wanted to help Levon with his shoes. He let her. She had some difficulty, even with August supervising the operation and I asked if she wanted a little help. She said she did and as I put the flip-flops on his tiny boy feet, Maggie kept saying, "Don't worry, Levon. MerMer is helping."

We had such a good time at the river. They've made some changes at the Wacissa. They've paved the parking lot and they've built a swell new dock. 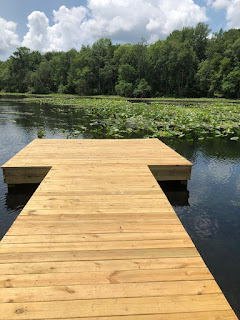 I don't really like change very much. I try not to be one of those old fogies who resists all change. I mean, that's ridiculous. Some change is for the good and that's all there is to it. But I do not like the paved parking lot. Seems to me that that's only going to encourage more people to visit what used to be an almost secret little perfection of a swimming place at the very end of a road that very few people drive down. But isn't that selfish? And hell yes, I can be one of those cranky old folks who sit around and say things like, "I remember when no one but three rednecks, two hippies and an alligator used to come here!"
Because I really can remember that.
But so what? That ain't the way it is now and I do love a dock. Always have. A wooden pathway connected to land but over the water, almost magical in its ability to span two states of being.
Here's a picture of Magnolia June from the dock. 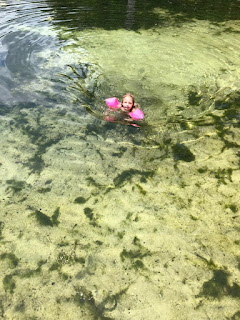 That girl. She just charms me to pieces. 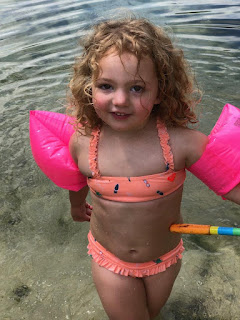 She is the boss of us all. She's learning to recognize letters and she can figure things out that I can't.
Here she is with August on the new dock. 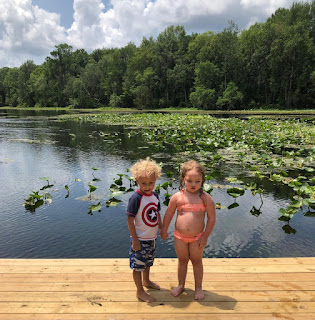 Those two are a force of fierceness. They are cousins united in age and in curls. They share genes and lunches of chicken and french fries which they both love along with plenty of ketchup for dipping. They get in trouble together and get out of trouble together. They know they are loved.

We mostly had the river to ourselves. There were a few guys who were fishing when we first got there but who moved on to the rope swings. They were neither too loud nor profane and they paid us as little attention as we paid them. Things will change when school ends but for today, it was almost perfect. Cool enough not to bake and yet, warm enough to make submerging in the cold river water a not ridiculous prospect.

We drove to the Hilltop for our lunch. This was my suggestion. Lord, I do love the Hilltop with its menu of 157 items. At least. We all got delicious foods that frankly, were not good for us at all and I am sure that several fryers were employed in the making of them. It was wonderful.
While we waited for our order to come up, fun was had on the long church pew where people patiently sit while their food is being prepared. 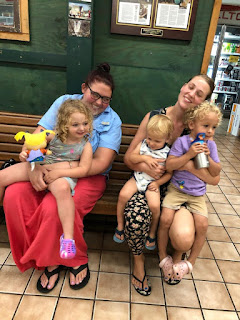 So much silliness.
Silliness is the best.

Summer is coming on and as proof I present the fact that I have already found two ticks on my body that had to be removed as well as getting some chiggers. Mr. Moon is developing a case of poison ivy, no doubt from all of the raking in the front yard he did yesterday. Why do any of us live here?
I guess because of rivers and beaches and giant oak trees and cafes in the middle of nowhere that offer everything from fried fish dinners to Reuben sandwiches to black bean burgers to red velvet cake.
And maybe because we're insane.
I will leave you with this. 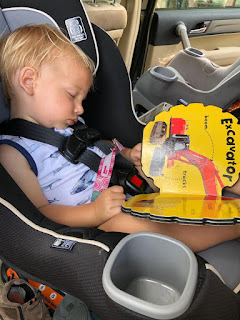