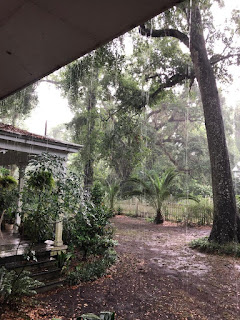 We got rain today. A good hard downpour for at least half an hour, maybe more, and there was thunder and there was lightening and I loved it. Now everything feels cooler and renewed and the white acre peas that Mr. Moon got planted in the garden today got a great watering-in. So did the second row of corn I planted. My Mother's Day present from my husband was the planting of those peas as well as a lot of weeding and mulching with leaves that he'd raked. And I appreciated that.

Just as I was planting my corn, Lily and Jason showed up with the boys and Magnolia and I was so happy to see them. It was a quick visit, but a sweet one. I got hugs from everyone and also a card and flowers and chocolate.
Pretty perfect.

I couldn't figure out anything special I wanted to do today for Mother's Day and when the rain came we just settled down in front of the TV and I made a Whirley Pop's worth of popcorn which was our lunch. We watched a few more episodes of Bloodline which we've been watching on Steve Reed's recommendation. We're enjoying it although it's one of those series where you think you know what's going on and then something happens that may or may not be a flashback and you may or may not be able to tell who's in the scene with the eerie music and murky darkness which leaves Mr. Moon and me saying, "What? What just happened? Who was that girl?"
And the other person saying, "Fuck if I know."
Also, a lot of the acting seems to be in the category of Overacting 101 but maybe that's just me.
The best thing about it in my opinion is Sam Shepard who dies in the series (not really much of a spoiler alert) and who is dead in real life but even more than that- the setting. The piece of property where most of the action takes place is on the beach in the Keys and I'd happily live there for the rest of my life.
Sissy Spacek has a major role as the matriarch of the family and I have to say that this is not her best effort. This could be more about the scripts than her acting ability. And yet, we are becoming sucked in by the show as always seems to happen.
Or, sometimes happens.

The one thing that I did keep thinking about today as a Mother's Day activity was going out to get a great seafood dinner. I think I had something in mind like this: 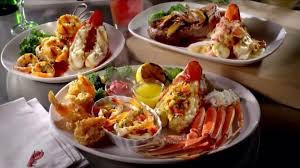 That is from a Red Lobster commercial and although Red Lobster is absolutely not the best place to go eat seafood, especially here in Florida so near the coast, they have the best ads in the world. Their food stylists are genius.
Once again, however, the idea of going out to eat on Mother's Day is so disturbing on so many levels that I couldn't bring myself to do it. Mr. Moon suggested that we go to Ouzt's for boiled shrimp which almost made me cry because that was so far from what I had in mind but I love him for the offer. Ouzt's is a place on a river near the coast and its clientele is at least 90%...how do I put this?...people who would go to Ouzt's for Mother's Day.
Bikers love the place. I'll just say that and leave it there. I'm not saying that I haven't had some good times at Ouzt's. I have. But those days may be over.

I think that Jessie and Lily are having fun on their child-free hotel room get-away. 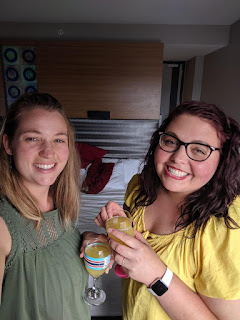 This is a picture that they sent us. They look pretty happy to me. I just hope they use ALL the towels. And washcloths. And toiletries.

And I'm pretty happy too. I've gotten the sweetest texts and calls from my babies and they absolutely make me feel celebrated and cherished every day of the year which is far more important than anything that could happen on one Sunday in May.

I'm going to go finish making our supper which does not have one bit of seafood in it but that's okay. There will be more seafood available for me to eat at a later, saner date.
Just probably not at the Red Lobster.
Although...did you LOOK at that picture?