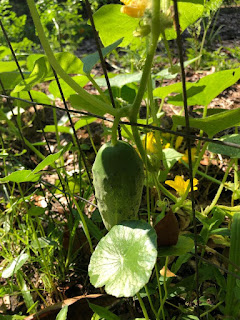 Can you see the cucumber hiding there behind the mighty, glowing dollar weed?
It's going to be in my salad tonight along with some arugula and I just braved the heat and went out and picked the cuke and the beautiful bitter greens and despaired over the weeds I should be pulling but in good news, the zinnias that I planted a few days ago are coming up.
I hope it's not too late for them.
The heat continues, of course, and I simply cannot bring myself to get out in it to work. Maybe tomorrow. Or maybe not.
I've had a draggy day wherein I accomplished nothing except to rearrange a small part of the kitchen counters which honestly made no difference at all in how things look or how they work, either, to tell you the truth.
But oh, doesn't it look tidy? 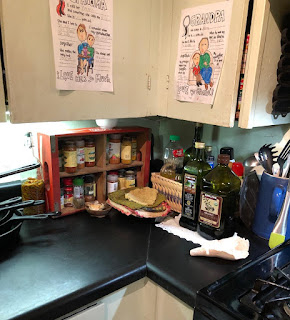 I've started stacking my cast iron skillets and pots in a nest on the counter in the last year. 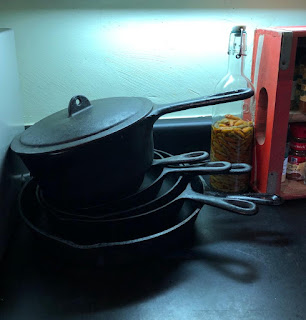 I'm doing that because getting them out of a lower cabinet is not as easy as it used to be. In my dream kitchen, I'd have a designated wall or a pot rack from which to hang them but there isn't room for either of those things in this kitchen.
I'm not complaining. I love my kitchen which isn't fancy in the least but which offers me as much space as I really need and if I got rid of a lot of shit I don't really need, it would be even better.
I did actually have a little spate of frustration today and threw away some of the stuff cluttering the mantelpiece in our bedroom- candles, mostly, along with some incense. I haven't lit those candles in years and the incense has been used even less. I went through an incense phase a long time ago but thankfully, it is over now.
I also threw out a large ziplock bag filled with old seeds.
"Let it go," I said to myself as I opened up the trash can and dropped it in.
Phew. That's a relief.

This morning I met up with Jessie at Costco. We were both rather slow today but the boys were their usual energetic selves, of course. There weren't many shoppers so we didn't feel bad when they wanted to use the cement areas below the freezers to walk on or the spaces behind the dog food to hide in. They weren't loud or unruly. They were just themselves having a good time. I am absolutely loving watching Levon try to keep up with his brother when it comes to everything.
Everything.
Little guys want nothing more than to be big guys and when something prevents that, it is the saddest thing in the world. Levon calls August "Augga" and he loves him and admires him so very much. I see the same sort of admiration from August for Owen and Gibson whom he truly must think of as demi-gods, to say the least. And they are sweet with him, too.
I get a different sort of feeling from my granddaughter. It seems to me that Magnolia June absolutely assumes that she can do anything that her brothers can do and that's all there is to it.
"Get out of my way," I can almost hear her thinking. "I have things to DO!"
The other day when I was at Lily's house, Maggie brought up Elsa from Frozen. I can't even remember what the context was but I told her that I think that she's prettier than Elsa.
Maggie leaned back on the bed and said, "I guess so," in a world-weary tone of voice that knocked me out.

So anyway, we made our way leisurely around Costco and finally they set up the samples and Beautiful Brenda was giving away the cinnamon pull-aparts and they were the favorites today for sure. I got to give her a hug and told August that it was completely appropriate that Brenda was handing out the sweetest treat because she is so sweet herself.
I'm not sure that he quite understood but the magnificent gift of being able to eat something so gooey, so cinnamony, so iced with sugar frosting was almost more than he could bear. Brenda told Jessie that they could have more and she said that no, that had been plenty but Levon said, "I DO!" which is his way of saying that yes, yes, yes, he wanted more.
They managed to contain themselves though and I was proud of them and ended up buying both boys and Maggie books.
This is the joy and privilege of being a grandparent- to bestow unexpected gifts at unexpected times.
We didn't go to lunch because Jessie could tell that Levon was ready for his nap and on my way home I saw Lily about to leave the little church parking lot which is where Owen and Gibson's bus drops them off. It's the last week of school and they are getting out early. It was nice to be able to see my boys. Maggie was with her father who was with his mother who got some surgery on her wrist today so I gave her book to Lily and we discussed perhaps going to the Wacissa tomorrow afternoon.
We shall see.

And my husband will be getting home late, late tomorrow night. It seems like he's been gone a lifetime. Last night they all went out to a fancy supper and he kept sending me pictures of what they were eating. My Lord! If I'd been on that trip I would have gained ten pounds by now. I think that he's probably very ready to leave the bright lights behind and come home to his own bed, his own house and his wife. I hope so.

And all is well here. The baby chicks are still alive and growing. I took them two chunks of almost-frozen watermelon a little while ago. Bugs haven't destroyed all of the tomatoes and perhaps we'll get a few. All of the electrical appliances are still working (knock wood!) and the cats are here somewhere. The weather forecast calls for relatively comfortable temperatures tomorrow in the low nineties and perhaps we'll get some showers on Friday and Saturday.

Robert Mueller spoke today and from what I can discern, he is saying that Trump indeed committed crimes but that he cannot be prosecuted until Congress impeaches him which of course, Trump interpreted as "insufficient evidence" which sounds pretty fucking guilty to me.
But y'all know that.

Summer's here and what with the global weather changes it is not time for dancing in the streets and I can only imagine that the cotton may be high but that it is probably shriveling up and that if catfish are jumpin', they're not jumping very high.

Still. Here we are. Here I am. Not every day can be a day of grand achievement and self-satisfaction on jobs well done. That's just life.

We'll see what tomorrow brings us.