Yet Another Wonky Day In The Land Of Lloyd 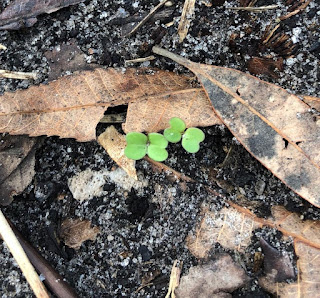 I woke up this morning already exhausted due to the fact that it took me forever to get to sleep last night due to leg pain which is what happens these days when I walk. So anyway, I got up and then the heater guy came and corrected the situation which is good because it's supposed to get down to something like 45 tomorrow which is Arctic for us. And of course he repeated the same thing he always says when he comes to fix this damn thing which is, "I just don't understand. I've had this same unit for twenty years and never had a problem."

See that picture there at the top? That's tiny arugula popping up through the dirt. It's the fourth day after being planted on Sunday. Some of the kale varieties are too and I expect the collards to be making their appearance any moment. This all warms my heart and I tried so hard this year to plant properly so that my rows won't be too crowded with seedlings that I need to pull and don't have the heart for.

So last night I dropped my phone which I do not have in a case and I didn't notice until later that the back glass had cracked all to crap which is why I spent a good part of today trying to figure out what to do about that. First I went to Verizon because they hold our contracts and they said that yes, I could get it replaced, the entire phone that is, for a mere $149 deductible and I asked how much it would probably cost to get the glass repaired and they said about that much, most likely.
So I went to the place where we usually go to get our phones fixed and they said they don't replace back glass and sent me to another place where they said they don't repair it either and that the phone would need replacing so here I am with my brochure on how to order another one and there you go.

I went to Publix where I did my usual thing which was to look for items which were right in front of me and after that I dropped in at Jessie's where I read August a book. Levon was asleep and I was vastly disappointed because he is really starting to walk and I wanted to see that with my own grandmother eyes and tell him how very proud I am of him. But it soothed me to see August and his mama and to sit down on the couch and read a book to that boy. The book I read is one that I checked out from the Monticello library and have in my car because I need to return it and it is just charming. 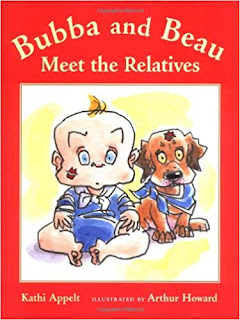 Also, it is very southern. August loved it and when I was finished he asked if there were more books about Bubba and I just looked that up and there are! Hmmm....

Then back home where I fell asleep on my bed and when I woke up it was time to have a little visit with Gibson and Maggie because Owen and Jason were going to go practice target shooting at a friend's property and Lily was working.
Yes. Target shooting. I will absolutely NOT deny that we are very Bubba and Beau-ish around here. We just are. But we're also liberal Democrat tree-hugging NRA-hating pagan heathens too, so there is that.
Most of us, anyway.

So Maggie and Gibson and I played the matching game and it was Maggie's first time. She did very well and kept saying, "My turn in a minute?" and I would agree that yes, it was her turn in a minute. There were also rather unceasing snacks and toy-playing.
The usual, although Maggie did not mention her babies once which is unusual for her.
Gibson asked when they could come spend the night again and I told him that I wasn't quite ready for that and he said that he would help me get ready and also, that Boppy would help.
"Boppy's a good man," he assured me in his wisest six-year old tone.
I agreed that his Boppy certainly is a good man and I am glad that Gibson recognizes this fact.
Here's Boppy kissing Maggie when the menfolk (please know I use that word with irony) got home from the woods. 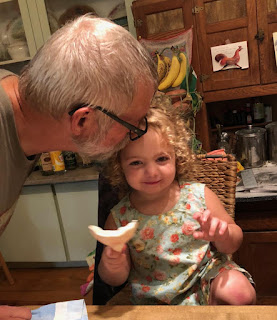 I think that both she and Owen are starting to look so much like their mama and in turn, their mama looks so much like Mr. Moon's sister. Those Moon genes are STRONG! Gibson seems to take more after his daddy's side of the family although it must be said that Maggie's eyebrow definitely comes from her father.
My darling little Frida.
And I would say for sure that her curls come from Jason's mama but then again- where did August get his curls?
It's all so mysterious.

It's raining and like I said, tomorrow is supposed to get much cooler and that will be different. I may let Dearie and the chicks have the run of the big coop tomorrow. We shall see about that. Gibson says that all of the new chicks are to be named "Dearie Jr." which would definitely make things easier.

Y'all are all so sweet to tell me to go get a tetanus shot. I wish I hadn't mentioned it because of course I have no intention of doing that. If I die, I die and you can all wail and gnash your teeth and say, "I TOLD HER TO GET A SHOT!" or alternately, "Stupid bitch."

Whatever. And who knows? I may change my mind. But let's not discuss it anymore, okay?
Thank-you.