Oh, Children! Get Yourselves Together!

Last Friday Lily took Magnolia to an Urgent Care place because she had developed a very nasty looking infection on the tip of one of her precious little fingers. I mean, it looked gnarly. They gave her two different antibiotics, one for strep because Gibson had had it and one for MRSA because, well- here we are.
And by today, the poor little finger did not look much better so, erring on the side of caution as we must do when it comes to our children (although not ourselves, obviously, when we tattoo our arm with chicken wire), she took her back to her regular pediatrician. The only appointment she could get interfered with Owen's and Gibson's pick-up from the bus so I volunteered to do that. And I was just getting ready to leave the house when the phone rang.
It was Jessie. I could hear August crying in the background.
"What happened?" I asked.
"August cut his head on his toolbox," she said, and with those words I could hear August's cries winding up further.
"Oh no! Does he need stitches?"
"I think so."
Vergil is out of town and as anyone who has ever taken a child and a baby to the ER knows, it is preferable to have someone else with you. Jessie knew that I was going to be picking up the boys but fortunately, Boppy, who had offered to go to the doctor with Lily and Maggie because she is so upset about her finger, had just been relieved of that duty because Jason got off work and was going to meet them there.
So. I called Boppy while Jessie tried to figure out the best place to take August and he headed over to her house and they took August to a new children's section of one of the local hospital's emergency room facility. Jessie had said that the cut was not very big but quite deep, and clean. Mr. Moon sent me a picture and I was relieved to see that Jessie's description had been correct. It looked far less menacing than Maggie's finger, truthfully, but deep enough that you'd want to get stitches.

While I was waiting on the boys, Lily called. The NP at the pediatrician's office said that the finger was not as bad as it might appear and to continue with the antibiotics and they also prescribed some heavy duty antibiotic ointment.
In other words, stop freaking out.

When the boys got off the bus they were surprised to see me and I told them why I was there and then I told them that August was at the Emergency Room because he'd cut his head.  Gibson, in his own inimitable voice yelled, "Did he cut it off?"
"No!" I said. And then I laughed and laughed and laughed.
In fact, I probably laughed more on our ride back to their house than I've laughed in days.
Gibson told me that he was going to change his name to Brock.
"Why are you going to change your name to Brock?" I asked.
And then he said something about Brock being the name of a Mighty Morphin or something.
"You can't change your name!" I said. "You have my name." Gibson is my middle name.
"Oh yeah," he said. "That's right. Okay."
Brock. Seriously. Brock.
Not that there's anything wrong with the name of Brock. But still...

So the boys and I hung out until Lily and Maggie got home and I got this picture from Jessie. 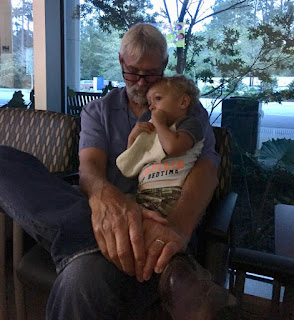 I have to tell you, I think that's my favorite picture of my husband, ever.
How that boy loves his Boppy and how Boppy loves his boy.
He's all sewed up now and the people at the kid ER were wonderful and he didn't cry a bit getting his stitches in.

And when Maggie got home she was asleep but then she woke up and I got to cuddle her for a minute before she wanted to go back to her mama.
Mama's arms are always best but it felt like a little piece of heaven to have her in mine even for such a short time.

It's raining. It's going to get chilly again, down into the thirties later on this week.
This is life. The unexpected, the worries, the rain, the goodness of family, the hilarity of small boys, the sweetness when the day is at an end and all is relatively well.

Who could ask for more?
Not me.