Shallots And Eggs Do Go Well Together

A much more normal day here, after midmorning, at least. It started out funky and weird but things straightened out and good news was received but I still felt knotted and anxious.
Because anxiety has nothing to do with reality for the most part, even if there is a tentative basis for it, the removal of the so-called reason does not cause it to simply disappear into the ether like a lingering spritz of Chanel No. 5.
So I knew what I had to do and I did it. 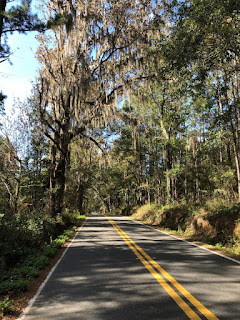 Down the road and back again, four nice miles. Such a beautiful day.
The house where the incredible Halloween decorations were is in the process of transformation into a strange and busy Christmas wonderland. Besides the nativity and the seals with balls balanced on their noses, there are now also penguins and a huge Santa hanging from a crescent moon. 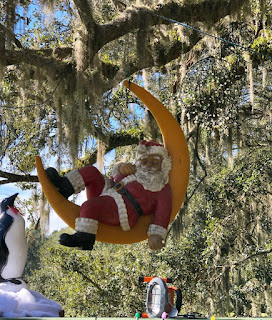 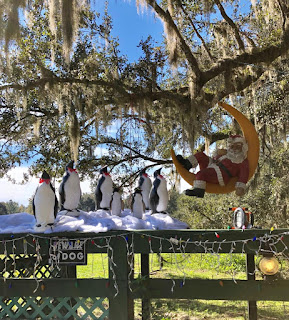 The Beware of Dog sign is still there. I've never actually seen or heard a dog in that yard.
The strangest thing of all was that a man who was probably one of the property's retainers was stringing lights on the fence right by where I was walking and I said, "Good morning!" and he absolutely ignored me. I was invisible.
I think that perhaps he would rather be dealing with cattle or barn-raising or something more macho than stringing lights that he'll be unstringing before too long.
Or maybe he just did not feel the need to talk to me.
I wasn't too upset.

I had an unusual chicken experience this morning. While I was on the porch, Miss Dottie came up, as she does, to get some cat food treats from me and after she ate she jumped up on the table where we keep the Friskies and rustled around in the stuff. There are bags of wild bird feed up there and I thought that perhaps she was trying to get into one of those but after awhile she hopped down and made her I-laid-an-egg cackling and I went over and checked but I could not find an egg.
A little later she came back, hopped back up on the table and got INTO a bag that I keep dried shallots in. 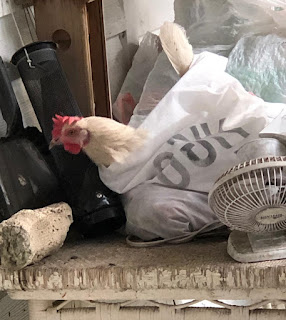 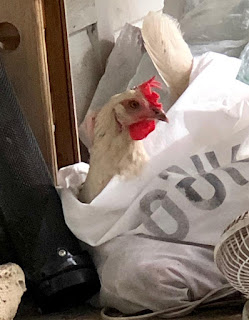 Hmmmm...I thought.
And sure enough, a little while later she got out of the bag and jumped to the floor and here's what I found. 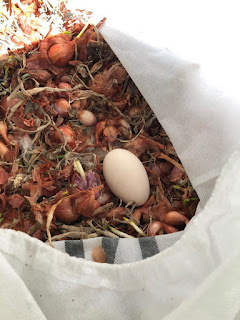 Oh, Dottie! You seriously strange hen!
Egg in shallots.
I imagine the silky skins of the shallots feel good on her bottom parts.
Anyway, I thanked her and she ran off to rejoin the flock.

And it's been a day like that, just simple stuff, and those can be the best days.
I did some ironing while watching a fairly horrible movie. The Land of Steady Habits.
Have you seen it? It got some good reviews and the main character was played by Ben Mendelsohn who annoyed the fucking shit out of me. You know how I say I hate it when I can see people acting? Well, he acted all over the damn place. Edie Falco was in it and she was great, and so was Connie Britton. The story was pretty lame and in my own personal opinion, all of the truly good performances were wasted on the material. As something to watch while ironing, it was tolerable.
I really am the nit-pickiest movie watcher of all times.

So. What do you think about the whole Michael Cohen guilty plea thing? Could this be the thing that brings the whole house of cards tumbling down? Trump knows he's screwed. He absolutely knows it. He must be in haze of blood spit right now.
Well, a normal human being would be. He's not a normal human being though, so who knows? I don't think the man has much of a grasp on reality so it's quite possible that he's convinced himself that he's as innocent as the driven snow of any crime whatsoever but eventually it's not going to matter at all what he thinks. 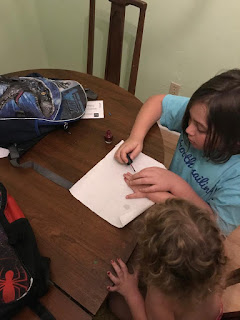 Owen the deer-slayer is painting his baby sister's fingernails.

This gives me hope and makes me love that boy even more, which is hardly possible.
But there you go.