Trying So Hard To Believe 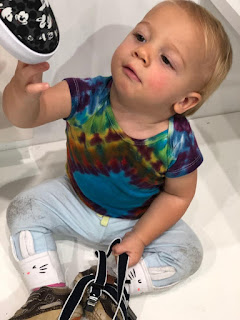 I woke up this morning convinced that I was going to have to send my new phone back and get another one but when I talked to the very last tech person before getting sent to the Warranty Department, she figured it out for me. I was not manipulating my headset properly for the bluetooth on the phone to find it and all the while I was doing what she said I was being all uppity and shit saying, "Look, I KNOW how to use this headset. I've been using it for months."
And then...TADA!
Headset recognized and paired.
All is well.
I thanked that young woman over and over again. "You solved my problem!" I told her. "Thank you so much!"
"You're welcome," she said. "I'm glad I could help." She said this with such sincerity and humbleness that it made me feel sort of like the shit I was but then again, I'm human.

And then I did something I haven't done in a very long time. Yonks, as the Brits might say.
I went to the mall.
August was being a pill according to his mother, a normal, naughty three-year old although I know that's hard to believe.
August? Naughty?
Yes. He can be. Especially for his mother because he knows she will not kill him. This is why children are always the most ill-behaved around their mamas. Everyone else, they're not so sure about but when it comes to mothers, they can be pretty certain that she won't murder them and make another just like them.
That sounds terrible.
But it's sort of true.
Anyway, Jessie wanted to look for some running shoes and she figured that August could get some ya-ya's out walking the mall and I thought, well, why not? I'll go too. And actually, it was pretty fun, mostly because August was having such a good time, taking in all of the sights and sounds and so I got to see it through his eyes and that made it not so bad. 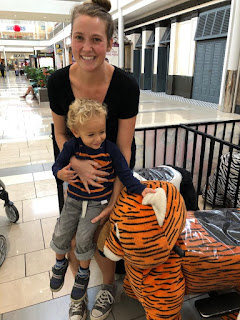 No one had the shoes we were looking for and all Jessie ended up buying were some clothes for the kids. Isn't that the way of it? We even ate lunch in the food court and I can't remember the last time I did that. But you know, it didn't kill me and it was interesting, watching all of the different people in real life, mothers and daddies and grandparents and babies and just regular people with no children involved and people with locs and people with cowboy hats and people with swagger and people with style and people with time on their hands and people walking with great determination.
And so forth.
August wanted to ride the escalator and so we did. I mean- how can you not enjoy something that makes a child so happy?
Levon took it all in with his wise little baby eyes and ate from his mother's lap with a plastic fork and flung bourbon chicken in all of the cardinal directions and wanted more.

I bought a phone case which I had promised Mr. Moon that I would do. I've just been a jerk about that although he most sweetly did not point that out when I showed him what I'd done to the glass on my phone. So. My phone is protected front, back, and sides and I've done my job.

And right now Andrew Gillum is doing his job. He's giving his last speech before the election right down the road in Monticello at my beloved Opera House where I've been in so many plays with so many people I love. It fills my heart to see him in that room which is absolutely packed with Blue Dog Democrats of every race and age who are cheering for him. If If I hadn't loved him before, I'd love him right now for choosing that rural, tiny venue for his last event.
Oh, how I want to believe he'll be our next governor!

Meanwhile, here I am in Lloyd with my chickens and my cats. It's gotten warm again and it smells funky out there, like living dirt and fallen leaves.
Dearie is in her little coop for the night with her babies. 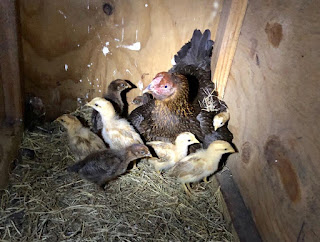 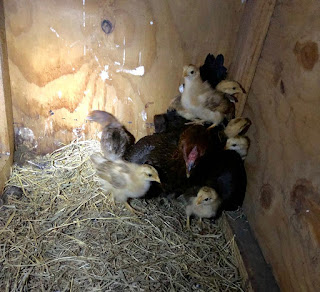 I love how some of them climb all over her while others tuck under her wings.
They're growing up and before we know it, she'll sense somehow in her bones that her job is done and she'll walk away from them and act as if she's never seen them before.
But the mothering she is doing now will have prepared them for that moment.
I find this incredibly comforting and a sort of brilliance on the part of evolution and what we call Mother Nature, I guess.

Anyway, she makes them feel safe and wherever she is, is home for now.