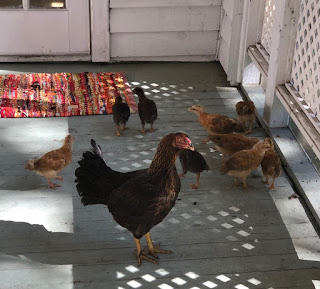 I finally took a walk this morning and I am amazed at how very quickly I can get completely out of shape. I hadn't walked in over a week and I did three miles and it almost killed me. It's sort of frightening how fast that can happen. Still, I did it and tomorrow plan to do it again. The weather is too gorgeous not to take advantage of.
After the walk I tried to stay as busy as possible, to just keep moving and that was fairly simple as Mr. Moon's hunting laundry ended up being five loads worth, some of which I hung on the line. How a man can wear that much clothing in four days is beyond me. Of course, he is a very, very tall man and one of his jackets and a few pairs of his hunting jeans is a full load. There were several jackets and lots of the jeans and also some padded and thermal jumpsuit sorts of things and I'm sure they're not called jumpsuits but I don't know what they are called. And there were socks and hats and gloves.
But now they are all clean and dry and folded up for him to put wherever it is he keeps those things. In a way, it's like his hunting world is completely separate from my world and the two worlds only overlap when I am doing his laundry or cooking venison.
It works out.

So. See that picture up there? That's Dearie and nine of her ten chicks. As I was eating my lunch on the porch she led the familial flock through the torn screen below the dog door. No one uses the dog door any more except for one of the children occasionally because it's fun but the torn screen below it is the perfect place for cats and chickens to gain access to the porch.
The young ones twittered and explored and Dearie approached me and demanded some of my lunch and I hate to admit it but I shared. She clucked her mama-tidbitting cluck and beaked up morsels to feed the chicks although they are quite capable of using their own beaks to pick up the food.
If you don't know what tidbitting is, there is a very fine explanation AND a small video HERE.
I find tidbitting to be an incredibly charming aspect of chicken behavior. And Dearie is an especially diligent and serious tidbitter. At one point she jumped up on the table to get to the source of the food and I did lift her up and set her back down on the floor. I also learned today that Dearie will jump for food which is pretty amusing, actually.
I felt as if the little jungle fowl hen had decided to take her children on a field trip today and the porch was their destination. She even attempted to lead the group into the house but I stopped her before she'd gotten very far down the hallway. It would be fine with me to have chickens all over the house except for the fact that they do poop frequently and with abandon and no, I am not about to put a diaper on a chicken.
I may be too tenderhearted and indulgent as a chicken mama but I am NOT about to head into the direction of chicken madness.
After all of them finally left the porch to head off to better scratching grounds, I cleaned up all the little poops and swept the porch and found these. 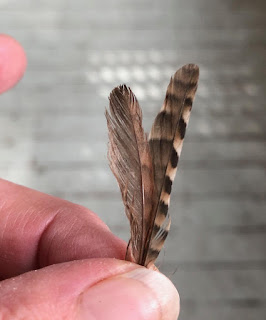 Well, that's the story for me today. I was domestically busy and rather cheerful.
Tomorrow I will probably make pastry dough and refrigerate it and perhaps angel biscuit dough as well although I am thinking it would make everyone just as happy if I bought frozen rolls or even better- Hawaiian rolls which are crack. There is something inside of me which balks at the idea of buying the bread for a Thanksgiving dinner. Some vestigial bit of DNA from a damn Puritan or something. Which is ridiculous.
We shall see.