Scenes From A Life 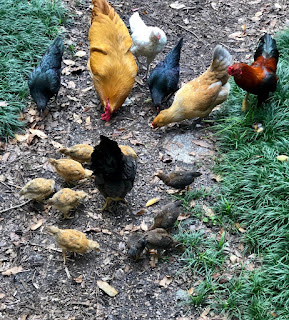 For all of you who wondered where the tenth chick was in yesterday's picture of them on the porch, I give you another picture. This one was taken this morning when I let all of the chickens out and threw scratch for them. It's just a bit difficult to get all ten in one shot. That's their mother, Dearie, in the middle of them and Vera/Viv, Liberace, Darla, Vera/Viv, Eggy Tina and Ringo behind them.
I know I've said this so many times before but every day when I go let my hens and roosters out to roam and range, I feel rich at seeing them.
This is hard to explain and I think it's probably due to something embedded deep within my human woman soul, passed down by thousands and thousands of matriarchal ancestors. Although I obviously do not depend on my little flock to provide all of the protein for my family, I do not discount the very real way I feel about the fact that they do provide some of it and I honor and appreciate that delicious, orange-yolked protein which comes in its perfect egg-shell container every day.
Not to mention, the chickens and the eggs are beautiful.
Which I also honor and appreciate every day.
So. Just wanted to say that.

Another full, busy day. I walked again and it was easier today than yesterday and I hate to say this because it's so...cliche...but I do feel better when I get out and walk, pushing myself up the hills and down them, even if my legs do hurt when I'm done. I am absolutely more cheerful and whether that's because of the endorphins or because it satisfies my Puritan need to suffer, I do not know. Either way, it is the truth.

We had a meet-up lunch at El Patron today because we hadn't seen Jessie and her boys since they got back from their trip and I enjoyed that immensely. Rachel is going to go spend Thanksgiving with her best friend in Boston so we were also able to say good-bye to her. She is still very, very sore from her car accident and it has been stressful and we all wanted to just tell her we love her, we appreciate her, we'll miss her.
Lily didn't come because Maggie had a bout of tummy problems last night and although she seemed perfectly fine today, Lily didn't want to risk anyone else getting it if it was a virus. So August and Levon were the only two children.
August was glad to see me but he did not show the excitement and sheer joy he displayed when his Boppy showed up.
Boppy is everything.
Boppy shared his (not very Mexican) wings with the boy which made both of them happy. Look at that hair! His forehead is healing up nicely although when it scabbed over the stitches became an annoyance and the child picked them out in his sleep.
Oh well. They served their purpose.
He told Boppy a long story about his bulldozer and how it needs a new battery and so on and so forth and Jessie finally told us that this bulldozer is imaginary which blew me away. I mean- I had an imaginary friend. Many people do. But I have never in my life heard of having an imaginary bulldozer.
I am not sure that I've ever met anyone like August in my life although I have a feeling that if I'd known Vergil when he was a child, I might see the resemblances.
Jessie said that August asked her the other day why their house was not like Mer's house. And then he asked if they could build it that way. I am sure that his daddy could do that if he set his mind to it but I don't think he will. So I guess that August will have to visit here as much as possible.
Poor child. 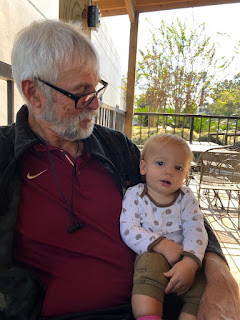 Even he, though, seemed to prefer Boppy to Mer today.
Good Lord!
He did let me hold him for awhile and I fed him cheese dip off a chip which soothed his anxieties about not being in his mama's lap.

And after lunch I had to hit the Costco where I got to see my favorite employee, the beautiful woman from Puerto Rico who wears the most sparkly and gorgeous of mermaid eye make-up and gives the best hugs. And then on to Publix to get the rest of what I need for my Thanksgiving dishes. I did not get any pastry made today but I can do all of that tomorrow.

After I'd gotten home and put all the groceries away and Mr. Moon got home, we had an interesting experience. Do you remember a few months ago when I gave a guy a ginger ale who was walking past our house while I was outside? I may have given him a few dollars too. Okay. I'm sure I did. Anyway, he came up to the house this evening and wished us a happy Thanksgiving and went into a long speech about who his people are and where they live and how beautiful I am and what Jesus says and how he inherited $100,000 from his father but put it all in his thirteen-year old son's name and a lot of other stuff which made me realize that he may be a beautiful soul but he's probably a bit insane.
Oh, Lloyd.
How great thou art! And how funky and funny and complex and complicated. I have only been here for fifteen years and as such, I am a newcomer.

And after all of that, Mr. Moon put up a new clothesline for me because the lines on mine had rotted and broken and I shut the chickens up after taking an egg out from under Miss Darla who then cackled and raised hell which caused Liberace to raise rooster-hell which is pretty daunting hell and now they're all quiet and hopefully asleep.

Which I too will be in a few hours.