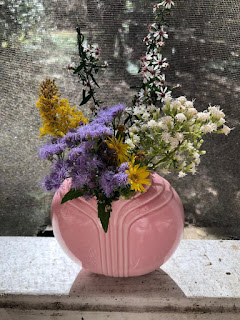 I have been so loathe to pick wildflowers this year. The older I get, the more I feel as if they should remain where they grow so that butterflies and bees can utilize them for their true purpose but today I couldn't stand it anymore and picked a tiny bouquet of them on my walk.

It is Halloween. I have stuck my pumpkin with a candle in it up on the fence post which is always taller than I remember and I have a bowl of miniature Reese's cups on the table by the front door and I will put the porch light on when it gets a little darker. The sun is just now setting and I can hear the tiny peeps of chicks and I'm a bit concerned because when I went out a little while ago to fill up their feeder and give them some grapes and spinach, five of them had somehow escaped the little coop and I don't think they have the slightest clue how to get back in which they desperately want to do but they also desperately do not want me to catch them and I'm going to need Mr. Moon's help to do so and he's not home yet. Poor Dearie, who, with no arms and no hands and unable to catch them in her beak to transport them safely back into the their shelter must be slightly frantic.
Oh, chickens.

So. August, who is three feet tall has a perfect viewpoint from which to see up into the range hood over my stove. I NEVER look up into that thing because I know what I'll see.
Nastiness to the greasiest degree.
And for some reason the child has been very worried about the degree of nastiness for quite awhile now and has been encouraging me to clean it.
Where did this child come from?
One day, when he and Jessie and Levon were coming over, he even got a cleaning rag and asked his mother to get it wet and put it into a bag so that they could help me clean it.
Oh, the shame.
I don't think my heart will ever recover from this story. The little bitty boy wanting to help his slovenly Mer clean her range hood.
He even asked me last week if perhaps I will clean it for his birthday.
No. I am not making this up.
I think this came about because whenever he asks for something that his mother doesn't think he needs at the moment, she'll say, "Mmmm...Maybe for your birthday."
Still, it only made me feel worse. MY THREE YEAR OLD GRANDSON WANTS ME TO CLEAN THE RANGE HOOD FOR HIS BIRTHDAY!
"So, August, do you want Legos for your birthday? Perhaps some new books? Art supplies? A toy kitchen?"
"No, thank-you, Mer. Just clean that range hood for me. That is all I ask."

Well, he just had his birthday last month but I decided today to get in there or under there, as the case may be.
And so I did. I used some of Birdie's cleaning elixir which is one half cleaning vinegar and one half Dawn dish soap, a lot of KaBoom!, and two Brillo pads. I worked for about two hours and it's as good as it's going to get but the area underneath what I guess is the grease trap is still filthy as is the grease trap. I think you're supposed to be able to slide that thing out but I can't make it slide because it's glued in with...grease.
But hey, August! I have done my best! I'm sure we'll all sleep easier now, knowing how much cleaner my range hood is.

UPDATE!
Mr. Moon is home and we managed to catch the babies and put them back and he hopefully sealed up the places where they'd been getting out. In the process I scratched my arm on a section of wire that wasn't nailed down flat and now I look as if I've taken up self-harm.

Look! If it scars, I'll have my first tattoo!

Also, the man managed to get that grease filter thing out.
Oh, Jeez. Thanks. Now I can clean that part too. That's going to take an entire BOX of Brillo.
Sigh...

And because of and despite all, it's been a pretty good day and I've been in a decent mood.
These things are inexplicable.

Still no Trick-or-Treaters. And honestly, I seriously doubt we'll get any at all but I have done my part. 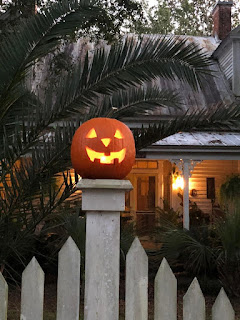 Who wouldn't want to come and knock on that porch door for Reese's cups? It's like the haunted house come to life, spider webs and all.
Happy Halloween, y'all.