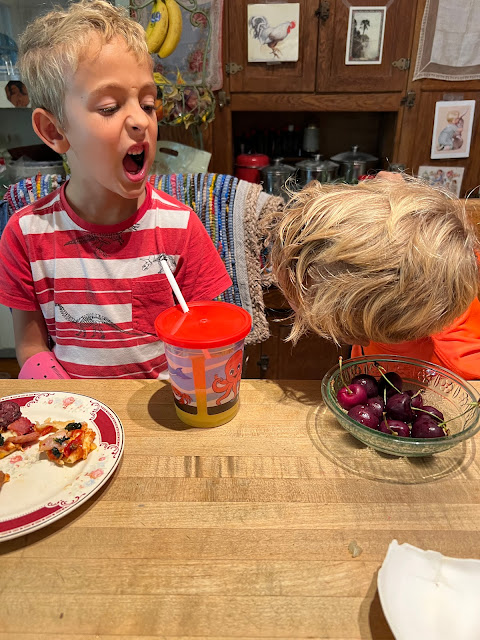 I got a nice little visit from these two today. Jessie was at work and Vergil came out to do a little hunting season prep-work in the woods with Mr. Moon. August and Levon chose to stay here with me which pleased their old Mermer greatly, even though I am aware that what they mostly wanted was the possible opportunity to watch some TV.
I showed them the new doll and they have named her. Her name shall be Lucy. This, too, pleases me as one of my favorite children's books is "Little Bear's Friend" and in that book, Little Bear meets a girl named Emily who has a beloved doll named Lucy. 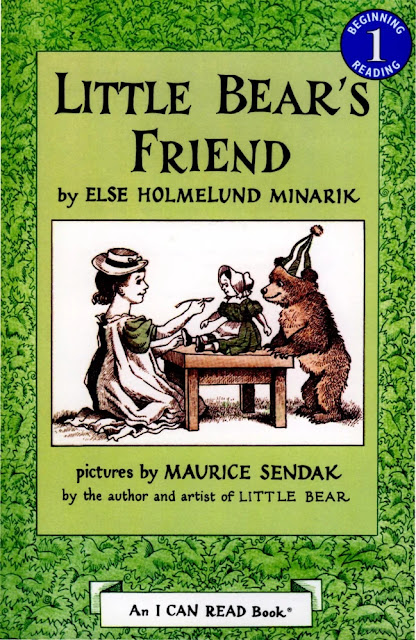 Lucy even has a bonnet!
Perfect, as Kathleen used to say so often.
In the picture above of August and Levon, they were eating cherries and the one August was eating seemed to have an extraordinarily large pit. Levon was checking it out.
While they were here August built some Lincoln Log houses and we read some books and they ate a little lunch and then they got to watch some TV.
It was fun.
Before their visit, Mr. Moon and I got serious in the garden. I finished up the weeding and even pulled the rest of the okra and he raked and tilled some rows. I was only out there for about forty-five minutes but that was plenty for me. He worked longer than I did and was soaked through with sweat by the time he came in. I was a bit worried about seeing him and Vergil go off to do more outdoor things but soon after they left a rainstorm came up and they were home in record time.
Glen will NOT listen to me when I tell him he's done enough for one day. He just won't. In fact, I feel fairly certain his last words will be, "I'll be fine. Stop worrying."
I've been cooking a pot of pinto beans and a ham bone with lots of meat on it since I started making breakfast this morning. I swear I think that was the Easter ham remnants and it's been in the freezer since then. I decided it was now or never and chose now because pinto beans with ham is my absolute choice for a Food of the Gods designation. I think I'll cook up the last few remaining okra with some onions and tomatoes to go with beans and I'll make a pot of rice.
If that ain't a Sunday dinner, I do not know what is.

So we ended up watching TWO movies yesterday. First the one I talked about in last night's post- "Me Time" and then, "The Beach Bum" which I had seen before with Jessie and wrote what I think was a pretty dang good review of what I thought about it HERE in 2019. I am not sure that even a dozen
people ever saw this movie, much less liked it, much less loved it aside from me and Jessie, and I'm not sure she loved it as much as I did. But I've been wanting to see it again for three years now and would occasionally google it to see if it was available on a streaming service and finally, last night, I found it was on HBO max which we do have and I was so excited.
You know what? I loved it again.
Some people just really do not like Matthew McConaughey at all, ever, in anything he does. I am not one of the those people.
And the role he played in "The Beach Bum" was as authentic and pulled out of the gut as his role in "Dallas Buyer's Club" was, in my opinion. I have known men like Moondog, his character in the movie, and everything from the hair to the hedonistic, trippy outlook on life, to the misuse and overuse of substances, the undeniable sexual charm, and the complete fucked-uppedness is familiar to me.
I probably should not admit how much I love this movie because I am sure it says more about me than I'd like to say. It is a vastly flawed movie in many ways with as many unanswered questions on the second viewing as the first. It has butts and breasts, Jimmy Buffet, and Snoop Dogg in it. It has Richard Brautigan's poetry in it. It has Florida sunsets and seascapes. There is an abundance of drug use, tragedy, indefensible behavior, and absolutely ridiculously unsophisticated humor.
All right. I'll shut up. I doubt any of you would want to see this movie. I have no idea why I love it.
Here's a trailer but I am warning you- if substance abuse, sex, nudity, and Matthew McConaughey offend you, just DO NOT WATCH IT.
Otherwise- enjoy!
Love...Ms. Moon
Posted by Ms. Moon at 6:43 PM