Well, of course now Lily has the Covid. She called me this morning and she didn't even have to say more than, "Hey mommy," and I knew. "Are you sick? Do you have it?" I asked her.
"Yeah."

Ah-lah. Well, it was pretty much a sure thing that she would get it. She's worked with the public all throughout the pandemic AND her partner got it. Lauren, thankfully, is feeling better and now she can help take care of Lily as Lily helped take care of her. The other grandmother and Jason picked up the kids. Lily is not happy that they will now be exposed but they insisted that they might as well get this over with. I think Jason has had it and so has Owen but of course one can get it again.
Lily would not let me hug her yesterday and was wearing a mask and I guess I'm glad for that. She says that so many of the people who work for Publix are coming down with it now.

For right now, though, our little enclave here in Lloyd seems to be free of the virus. Today Mr. Moon and Vergil went back to Lamont to put a motor in a feeder and the little guys elected to stay here with me. 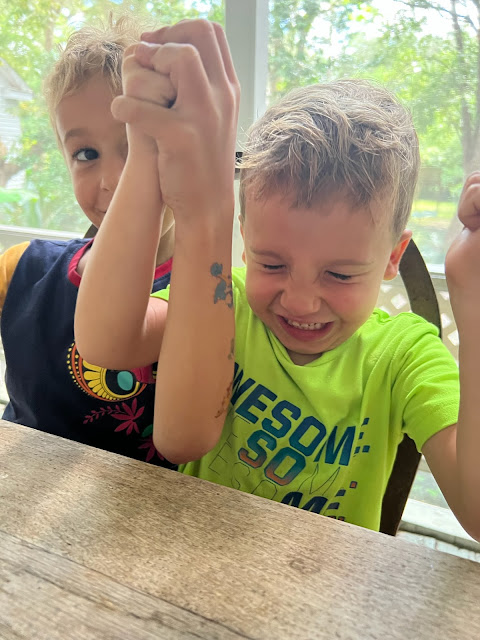 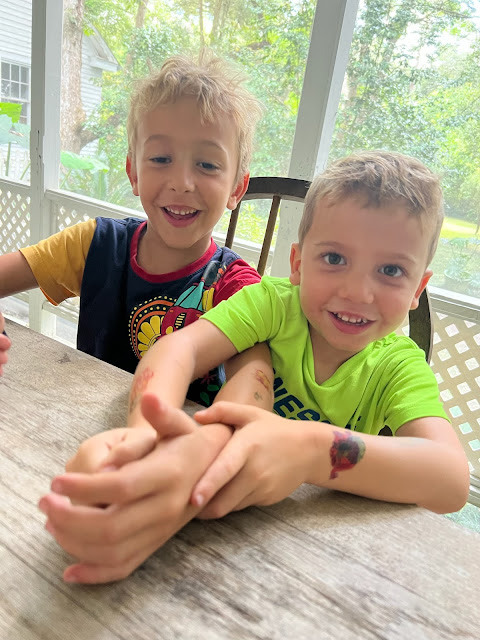 We read some books and then we played a card game called "Garbage" which turns out to be a fairly fun game. Levon was on August's team, which makes things easier. I am always amazed at how well they work together on these team projects. I am not sure that we quite followed all of the rules properly but I wasn't worried enough to go back and rewatch the video on how to play the game.
And of course, the team of August and Levon won.
After that I made them some popcorn and let them watch TV. While we're discussing popcorn, let me just put in another plug for the Whirly Pop popcorn maker. Of course they aren't paying me. I fucking wish. But after years of making popcorn in the microwave, we got this funky and old-fashioned device and we love it. 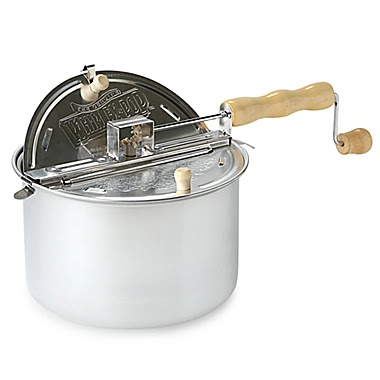 I buy the Orville Redenbacher brand popcorn because it truly does pop better than any other brand I've tried. It is not unusual for every kernel to pop. And the taste is so far superior to microwave popcorn. You can opt to put whatever you want on it and in whatever amount you want, too. Mr. Moon (and the boys) want LOTS of butter and salt and we also use nutritional yeast sprinkled on it generously. Gives it a nice cheesy flavor along with your B-Vitamins.
I learned about nutritional yeast from The Farm cookbook too, if I remember correctly. I add it to cheese sauces and soups, etc.
It's an old hippie thing.
Like me.
I watered the garden today. We are getting no rain at all and there's none in the forecast until a week from Monday AND I can see that it's supposed to hit 97 on Thursday.
So long, fall! We hardly knew ye!
Damn.
Anyway, this is what the row of arugula looks like right now. 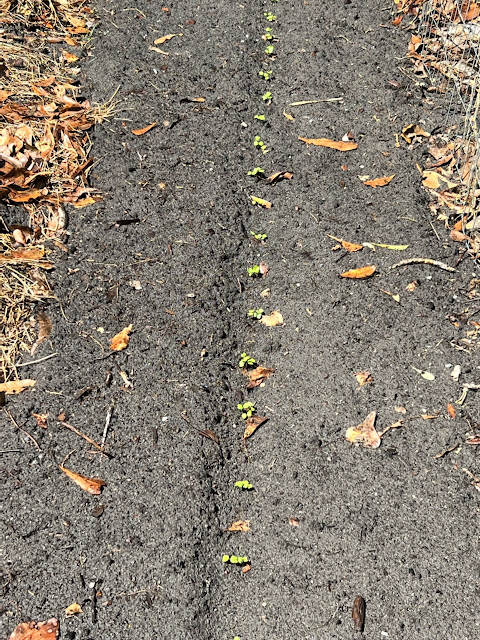 That is the easiest vegetable to grow in the world as far as I know.
I see that Trumpty Dumpty is openly embracing QAnon which I am sure surprises nobody in the world. They are his people! Can you even imagine believing in a movement that thinks that HE is going to be the savior of us all?
Holy shit.
Talk about a cult. I can think of only one way to end the horror but it would not be prudent to discuss that on a public forum.
Is this a public forum?
I guess so.
And I also guess that I have nothing more to say.
Endings are always the hardest part so I'll just say-
Love...Ms. Moon
Posted by Ms. Moon at 6:33 PM