Trauma, Drama, Pizza And The Patriarchy 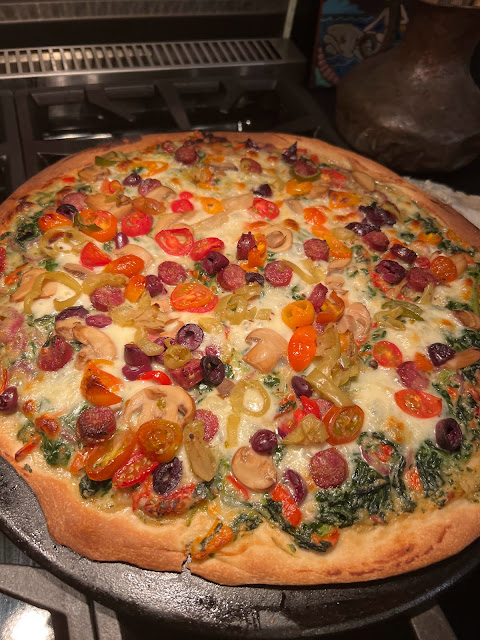 I did not even open my eyes until ten this morning. I was so shocked! I rolled over and looked at Jack and said, "What the fuck, dude?" as if he had anything to do with my slothful behavior.
He was not perturbed.
I jumped out of bed, immediately aware that what I was feeling was shame. SHAME! It was absolutely drilled into me as a child that no one but sluggards and the most despicable creatures sleep past eight. "I'm so behind!" I thought and then I thought, "On what?"
I mean really. I had no schedule today. I had no timeline to follow.
However, despite the fact that I've been sternly lecturing myself all day long on how it is absolutely fine to sleep late every now and then, I still feel guilty.
I will never outgrow that, I'm afraid.

I slept late because I did not go to bed until late. I had made that pizza you see above (no pizza delivery in Lloyd) which took quite awhile but since there was no one here starving for his supper, I took my time with the chopping and slicing and the making of the sauce.
It was (and is- there is a lot left) a very fine pizza.
And while I was eating my delicious pizza, I decided to re-watch "Nanette" on Netflix and I did and it was amazing once again and then I had to clean up the kitchen and then I had to take my shower, of course, and then I had to read for awhile.
Again- of course.
So by the time I turned out my light it was quite late.

Now the one thing I was really behind on was letting the chickens out of the coop so I hurried out there and when I opened the door to the hen house I found something quite disturbing.
No, it was not a dead Darla, it was this. 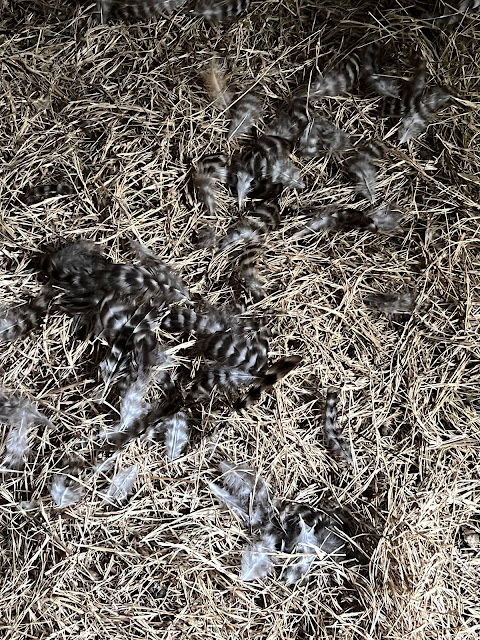 A whole bunch of barred rock feathers. Far more than molting would cause. My one remaining barred rock, whom I call Annie, was nowhere in sight.
Jesus.
And the other chickens, who were in the coop which is connected to the hen house with a run, did not want to walk through the hen house to get out which is what happens when something traumatic has occurred in there.
At that moment, I saw Annie and she looked fine and she has acted fine all day long so I have NO idea what got in there and attacked her but obviously, something did. The door was shut so whatever it was must have somehow gotten through the little space between the coop door and the door frame. I guess. And why didn't it take Darla who was right there on the ground, far more defenseless than Annie?
Chicken mysteries. They do abound.
So anyway, I fed and watered them, gave Darla more food and water near where she was laying. She is still alive, still moving about from one spot to another. Last night two of her bebes were sleeping right beside her when I shut them up. 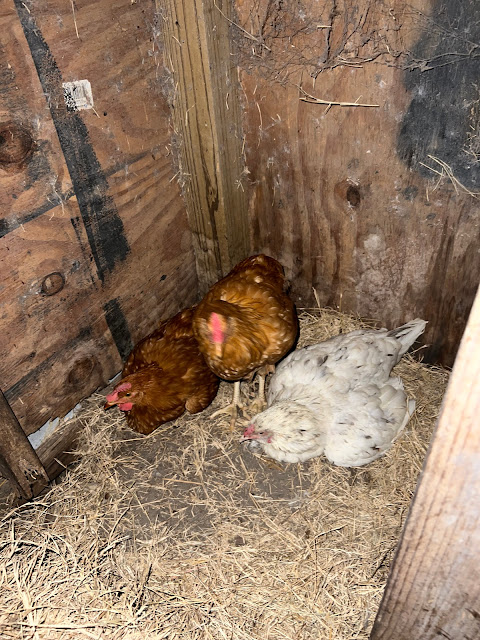 I know that whatever happened in there last night must have been very traumatic and stressed her out even more but she is still with us.
I did a tiny bit of mulching in the garden and then picked green beans and more field peas. It was sunny and hot and I could not take much more than that. It has rained some this afternoon which has helped with the heat but by the time things had cooled off some, I was already well-invested in sitting on the couch and shelling peas and watching Hannah Gadsby's other Netflix special, "Douglas" which I am not sure I'd ever seen before. It was not nearly as heavy and hard as "Nanette" but she still pulled no punches and I think she's a genius and I love her.
It's funny how the older I get (do I say this in every post now?), the more aware I am of how the patriarchy and misogyny have, and still do, affect the lives of women in such deeply injurious ways, mine included. My husband gets quite defensive when I speak of these things to him and I doubt he could watch an hour of Hannah Gadsby without feeling hugely uncomfortable although of course, he would never knowingly act in a patriarchal or misogynistic way. What I try to explain to him is that these things are so deeply ingrained in our culture that even women do not always recognize them but just accept that things are the way they are because...well...that's the way they are. Gadsby shines lights where lights are needed and she is not afraid to say what should be said. She appears to be fearless but I think she's probably mostly just incredibly brave. I want to try to be braver myself. In which case I will probably be called a shrew or a bitch or whatever else our culture labels women who speak the truth are called. I'm sure I could ask Hannah Gadsby as she has no doubt been called them all.
**********
I just took a picture of Annie on the kitchen porch, hanging out with some of her sisters in the drizzle we're getting now. 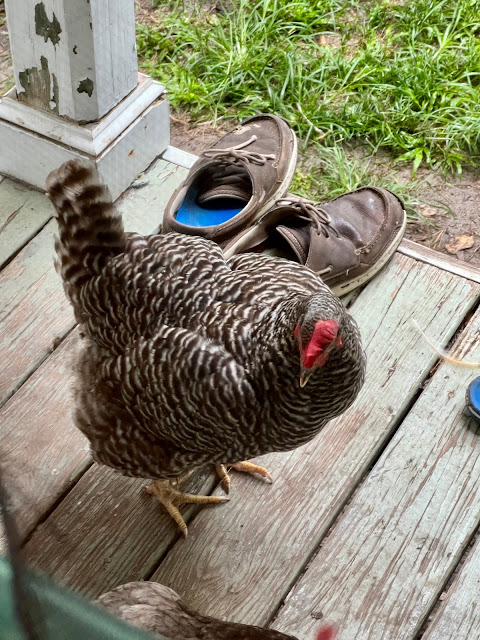 Like I said- she appears to be fine. I truly hope she is. And I hope that whatever got into the hen house has decided that another attempt would be a bad idea.
Love...Ms. Moon