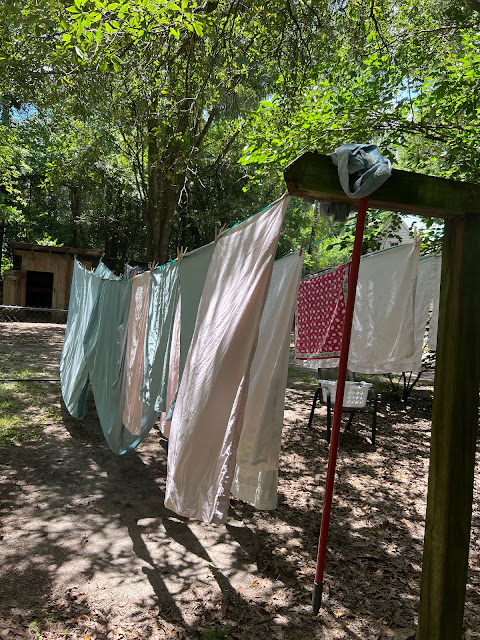 It was a hang-the-laundry-on-the-line day. Hot and sunny. Despite the rain we got at the river yesterday, it did not rain here which is not untypical for these summer showers. They pour on one place and completely ignore others, no matter how much we may plead for them to head our way and bless us with their sky water. We've gotten no rain today either and the sheets were dry within a few hours, and now are on the bed, crisp and smelling of the outdoors, of breezes through trees and sunbaked cotton.

I had the best birthday. It was exactly what I wanted. I was so grateful to my husband for so amicably accompanying me on the little adventures we took. Big celebrations overwhelm me and I do not deal with birthday tributes very well, to be honest. Even the good wishes I got on Facebook overwhelmed me although I appreciated each and every one of them. Because I actually know and am friends with almost all of my FB friends, I did not feel as if the messages were rote in most cases and I cherished them. Same with all of your comments here.

After I finished my post, there was even more perfection. Mr. Moon had gotten me two beautiful new baking dishes for my birthday and when the snapper was thawed, I asked if instead of him grilling it for us, I could use one of my new dishes to try and make an old favorite from Angelo's, a restaurant that used to be in downtown Tallahassee that we both loved so much. Snapper flakes au gratin was the dish and it was something no one could ever forget. Great chunks of white fish meat (where did Angelo get his seafood?) in the creamiest white sauce, topped with a thick blanket of cheese, all baked until the cheese had melted and the whole thing was bubbling in its own little ramekin. It was the food that I always said a cat would eat in heaven- the fish, the cream, the cheese.
It is a food I would gladly eat in heaven.
And so, out of deference to my request and out of the sweetness of the memories of snapper-flakes au gratin, my husband graciously allowed me to cook the fish.
I am not being sarcastic here. I love to cook and that's all there is to it, and having the new dish and the beautiful fish inspired me.

But before I cooked a thing, Lon and Lis called and sang me Happy Birthday, which is what they do, and I was thrilled and we shared martinis, long distance, and clinked on speaker phone. That was another part of my happy, happy birthday.

And then I got to cooking. Together we had shelled some field peas and I started them on the stove before I began on the fish. Talk about farm-to-table! And boat-to-table! What riches! I made a white sauce that was as rich as a white sauce can be without cream but with evaporated milk and 2% milk with butter, of course, to zhuzh it up. It had salt and pepper, nutmeg, and sherry.  That was all it needed. I buttered my beautiful new emerald green dish and laid the snapper filets in it and covered it all with the white sauce, then grated some parmesan and aged havarti, mixed those with some bread crumbs and a little more butter to top the casserole, and baked it to perfection. I added some rice to cook with the field peas when they were close to done and made a salad with plenty of basil from the garden.
I am sure that somewhere we could have gotten an equally delicious meal but I seriously doubt that we could have found one made with such fresh ingredients and cooked with such love.

And then...and THEN! I determined that what a sixty-eight year old woman needed on her birthday was a good dose of The Rolling Stones and so we found YouTube videos from their current tour that were taken, I think, by some super fan who appears to get the same seat right in front of the stage for each concert and who knows what the fuck they are doing when it comes to videoing. They are not videos that have gone through professional editing as one would see in a documentary or professionally shot concert but they are truly worth watching and the sound is terrific. And so, this old hippie who never truly fell in love with the Rolling Stones until her late fifties when she read Keith Richard's autobiography, was as happy as she could be. 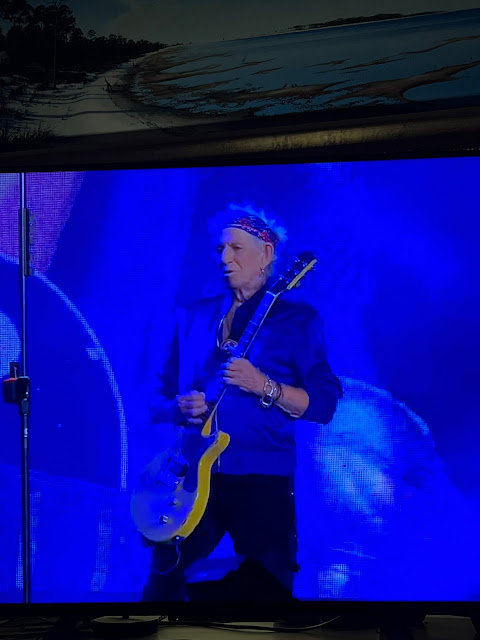 The footage showed a band who is absolutely not doing a summer reunion tour for old fans, playing their hits just like on the record. There is no doddering here. This is no phoning it in and counting on the nostalgia of the audience to make up for time's ravages. Of course they are no longer in their twenties or thirties or hell, even sixties! But they are a working rock and roll band who yes, plays their hits, but as if each time they play them, they are rediscovering them for the first time. There is still some jamming, there is still room for surprise, there is joy.
Hell, Mr. Moon even got up, pushed aside the table, and held out his hand for me to dance.
And we did.
It was a truly symbolic and meaningful evening for me to watch these old boys as they are entering their older years, enjoying what they do so much that they can't imagine not doing it and who are still able to get the audiences they do. Who are still defining and redefining what a rock and roll band looks like. Sounds like.
There is still plenty of strut left in them. They are still giving us what we want.
And perhaps- NO! OF COURSE! they are giving us what we need.

At least some of us.
So that was my birthday, from flowers to fish to fan-girling.
And somehow, Mr. Moon (who let me point out is a month older than I am) got up at 3:30 a.m. to leave the house to go to the coast for the last day of either grouper or snapper fishing and I should know that but I don't. Either way, he did that and I don't know how. I guess it's what I wrote to a friend today- he does what he loves.
Here's an okra that I MUST pick tomorrow. 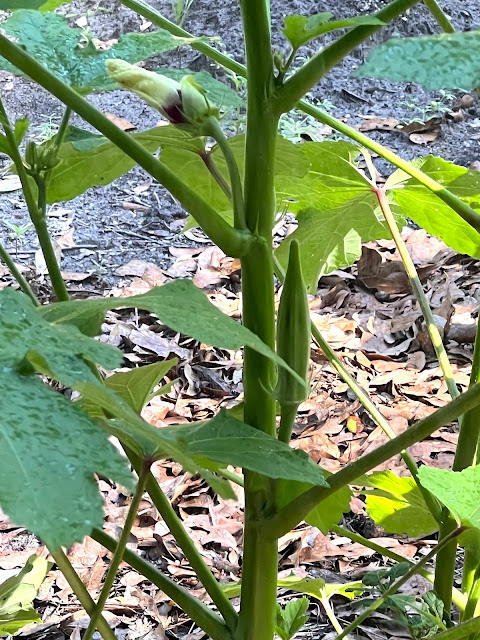 Isn't that just the prettiest little okra pod you ever saw in your life?
One more picture. My friend Lorie who is, without doubt and universally known as the NICEST PERSON IN THE WORLD sent me a card and in with the card was this.

Dang. It's like she knows me.
Happy Friday.
Love...Ms. Moon