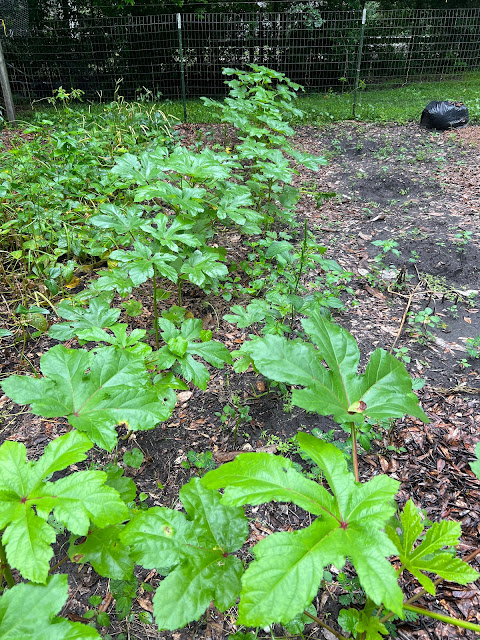 I know it's been a good day for me when I have to take a shower because I am filthy with garden dirt, drenched in sweat, and perhaps a little bloodied from a thorn or...something.

Today was a good day.

When I got up this morning I determined that I would have a stay-at-home day. A take-it-easy day. And I did stay at home. And honestly, I did take it easy, gliding from one little task to the next, working outside between the rains which kept things relatively cool.
Relatively.
My first real goal was to pick all the field peas that needed picking and I think I got most of them. Enough to keep me busy shelling the pretty little pea-beans from their sturdy pods for hours. While I was going through the vines picking, I was also pulling a few of the taller weeds and despairing at the overall plethora of them. I determined to try and get a least the ones right around the okra dealt with and I have done that and a little bit more, too.
Before the weeding had barely commenced, Mr. Moon came home from the gym and running a few errands with our grandboy Owen. We had discussed having him spend the night tonight but somehow that had morphed into him going on a fishing trip with his grandfather and a few friends tomorrow. They got everything packed up to go to the coast this evening so they can get a very early start. While Glen was getting the fishing poles and tackle all sorted and ready, Owen sat in the kitchen while I snapped the green beans I picked yesterday. We talked and talked and talked. I ended up telling him some of my (and thus his) family's history, some of which is pretty interesting, some of which is dreadful, and some of which is something to be proud of. It made me want to do some genealogical research which I have been flirting with the idea of doing for some time now. I guess that an interest in doing that comes with older age, just as does the bizarre interest in wild birds that I do not truly understand but which is real. Old people love watching birds.

Soon enough Mr. Moon had gotten everything packed up and ready to go and both of them kissed me and hugged me and I made them pose for a picture. 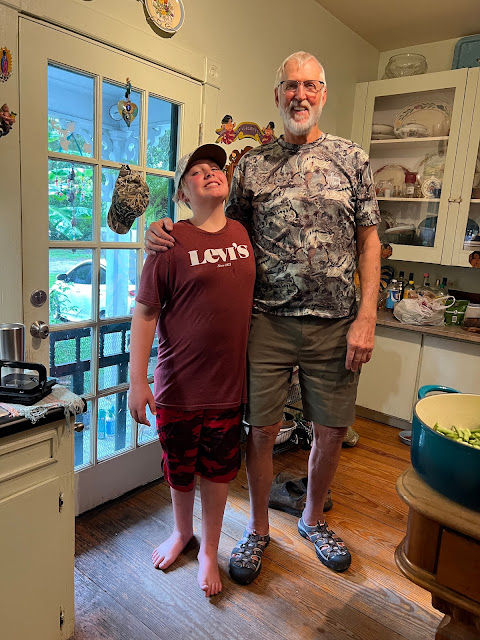 I am not sure who was more excited, the man or the boy. It looked for a little while last night like the fishing trip was not going to happen and my husband was so depressed but he figured and wrangled and made it work as I knew he would.
After they left I finished up the beans and did the weeding I mentioned and now the beans are simmering on the stove in one of my biggest pots. Most of them are very mature and are going to need quite a bit of cooking in order to be tender and I'll just get these cooked and freeze them in portions. They were way too big to make into dilly beans.
When it was raining today and I wasn't doing laundry, I watched some of a basic video on how to use the camera on my iPhone and have been fooling around with the macro function. I just love this. There is so much more to learn but here are a few pictures illustrating what it is capable of. 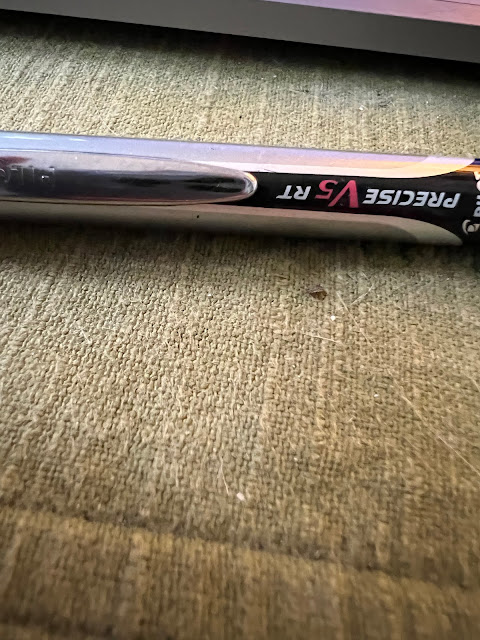 That is a pen on a place mat that I have my MacBook on. Can you believe the detail in the weave of it? 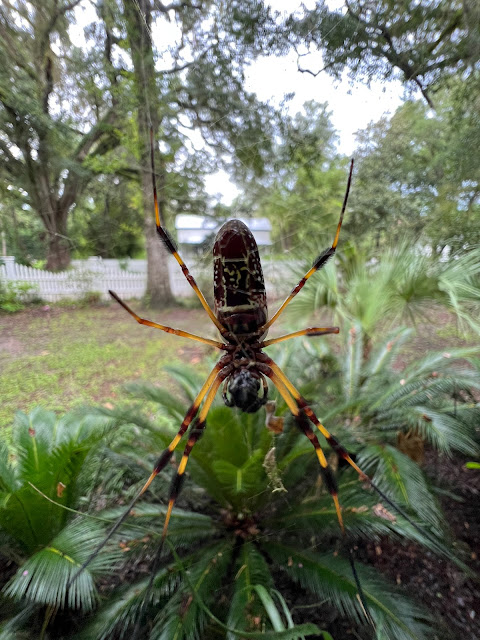 One of the Golden Orb Weavers (aka Banana Spider) on the front porch. She is not a mature lady yet and is actually fairly small. 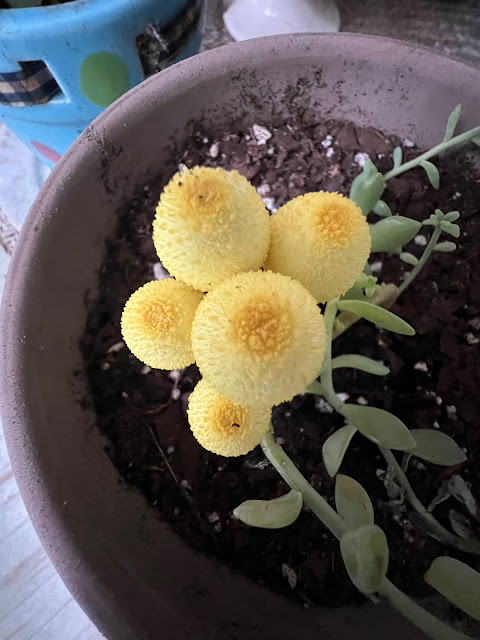 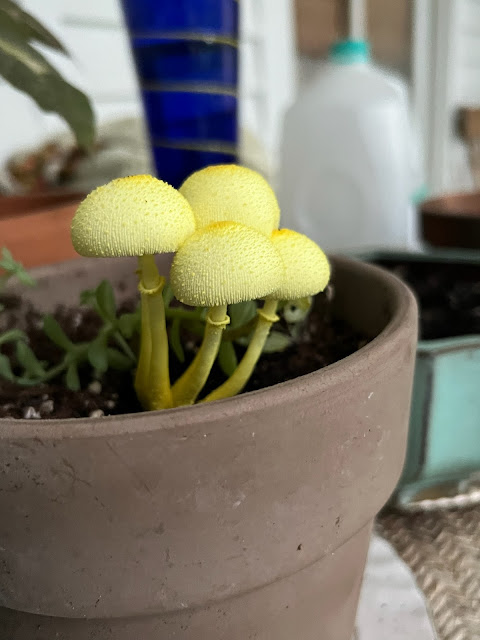 These are tiny mushrooms which suddenly appeared overnight in a potted succulent. After some research, I see that they are Leucocoprinus Birnbaumii, the yellow houseplant mushroom. According to the article found here, I should probably get rid of the plant but I have no interest in doing that. The mushrooms are as interesting to me as the plant is. 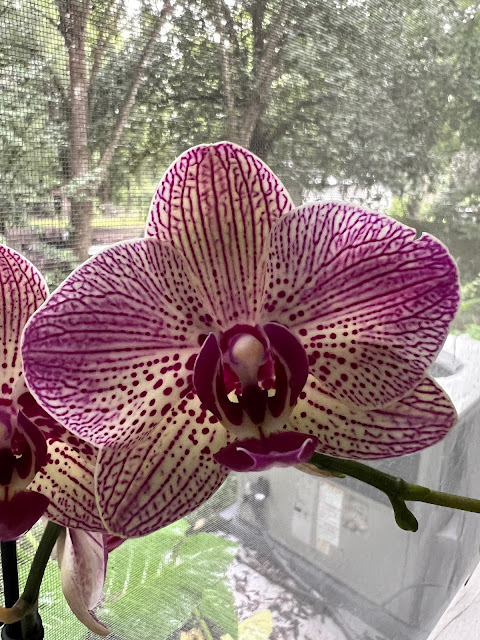 One of the Publix BOGO orchids' blooms. I have not killed it yet!
I am so impressed with what this camera can do and I am looking forward to learning more about it.
Darla is still alive but I do not know how long she can survive. I made her a scrambled egg which sounds cannibalistic and wrong but chickens love eggs. She did not touch it as far as I know. I also put some baby chick electrolytes and probiotics into her water but I haven't seen her take a sip of that, either. I am honestly very surprised she's hung on this long. She does not appear to be suffering but really- how would I know? She appears to be alert and awake.
Here's one more picture, this one of part of the flock as they were hanging out on the kitchen porch waiting for the drizzle to cease. 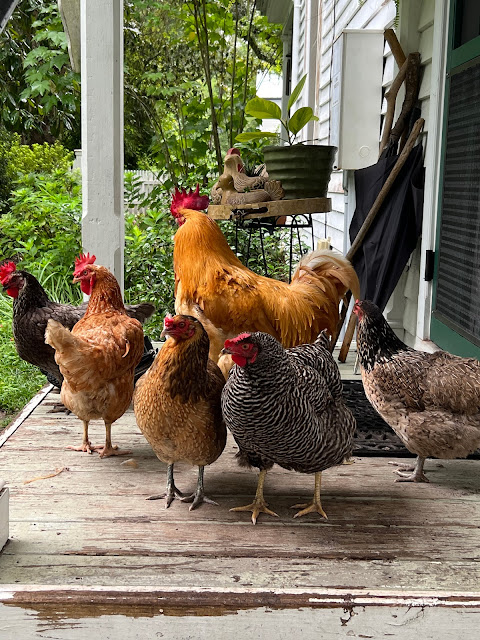