Peaceful And Wild, Sweet And Delicious 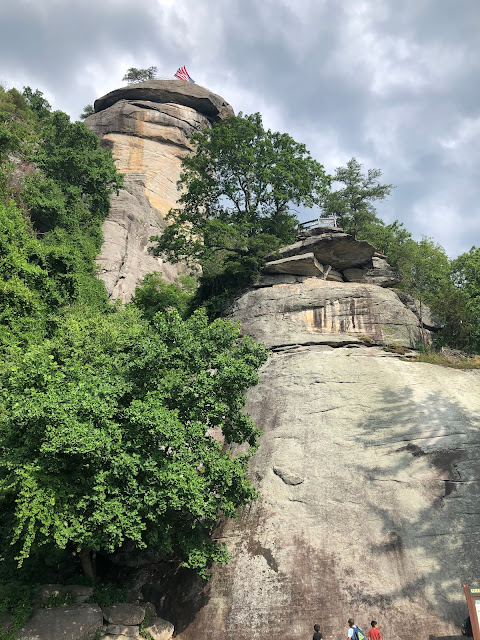 This is Chimney Rock which we climbed yesterday.

Actually, we took the elevator to the top. Yes. There is an elevator. The park employee elevator-operator had a copy of "Midnight in the Garden of Good and Evil" to read when business was slow. "I'm not going to lie," she said. After a few hours I get vertigo."
I think after a few hours I'd get insane.

But we were only in the elevator a few minutes and then out into the sun on the side of the mountain where we only had to climb a few steps up to the top. 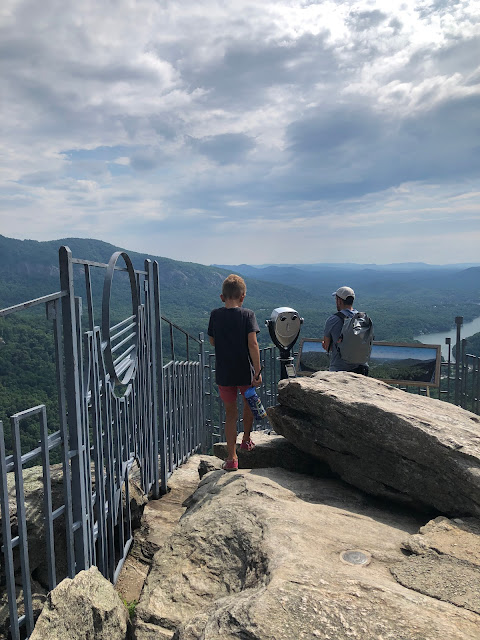 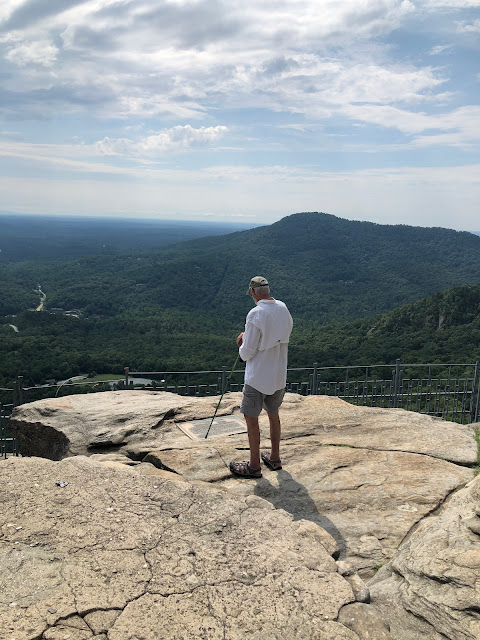 We hung out there for awhile, watching other people come and go. There was an older man with a Vietnam Vet T-shirt on who wanted to get on the piece of rock with the American flag so his wife helped him up. Not an easy task- he was wearing two knee braces. He needed the assistance of another younger man to help him down. I heard him say, in response to someone's comment about finding a good place to eat, "Huddle House! Best damn waffles in the land!"
Not too sure about that but I left him unchallenged in his opinion.
And then we walked down about four thousand steps to the bottom at which point all of our legs (except for Vergil's) were trembling. He had taken the boys on a short-ish hike at the park before we even got there. We had to take two cars and Jessie drove us. Despite trembling legs, the little guys tried some rock climbing. 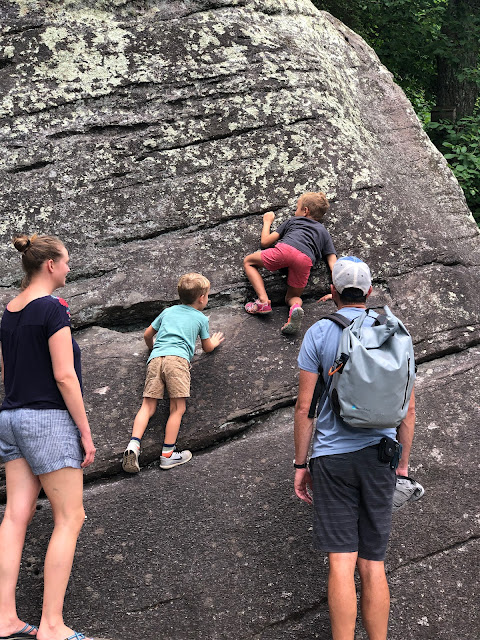 Strong, tough boys. Watchful parents.
When we were walking back to the cars, a woman with a small doggie asked us if it was a difficult climb up to the top. She couldn't take the elevator because they wouldn't allow dogs on it and she was entertaining the idea of doing the steps. We discouraged her on that as even young, athletic-looking people were looking strained by the end of the climb. The funny part, though, was when her dog, a Shih Tzu, was nosing and sniffing around August and Levon and the lady said, "He just loves kids!" except that with her accent, it sounded as if she was saying, "He just loves kee-yds," and August asked, "What's a kee-yd?" He really wanted to know.
We went to lunch afterwards at a place on the Broad River. There was not only dining and drinking but also river watching, wading, and in August's case, swimming. 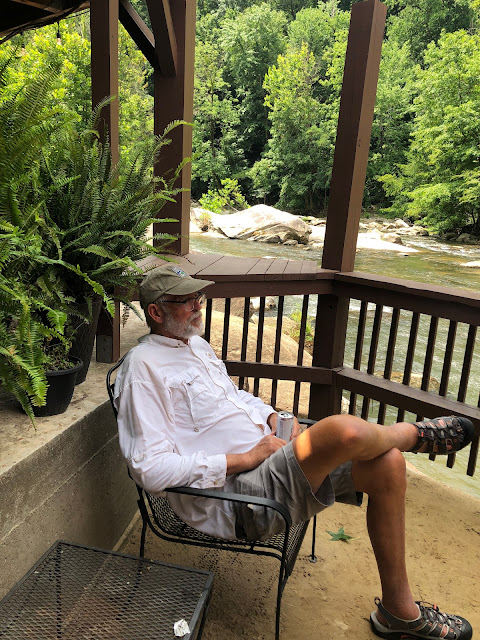 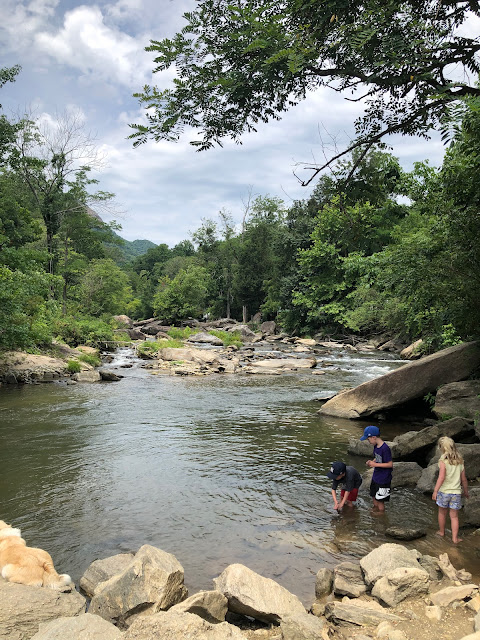 His wading sort of, kind of, accidentally became a dip. His daddy was right there, and his mama too. We all ended up at least dangling our legs in from a rock perch. It felt wonderful, especially since the temperatures yesterday were dang hot.
We really have not done that much exploring or traveling about on this trip. We've been happy here at the house we've rented, the boys playing basketball and games and trying to convince us to let them watch TV. There's also a hot tub that makes them as happy as swimming in a river would, we've been eating good meals and reading books and making a fire in the chiminea and toasting marshmallows for S'mores. 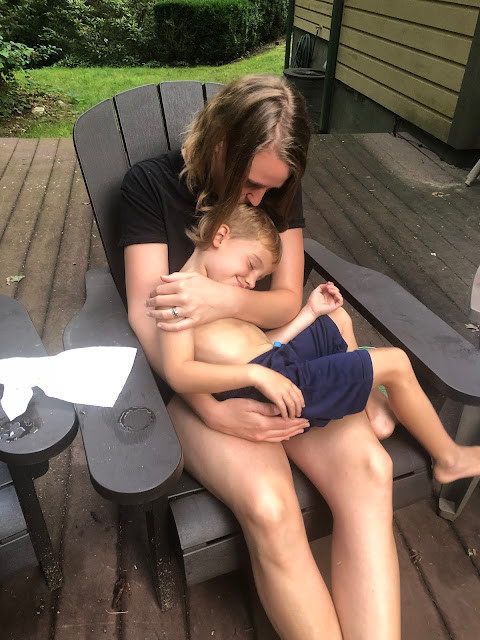 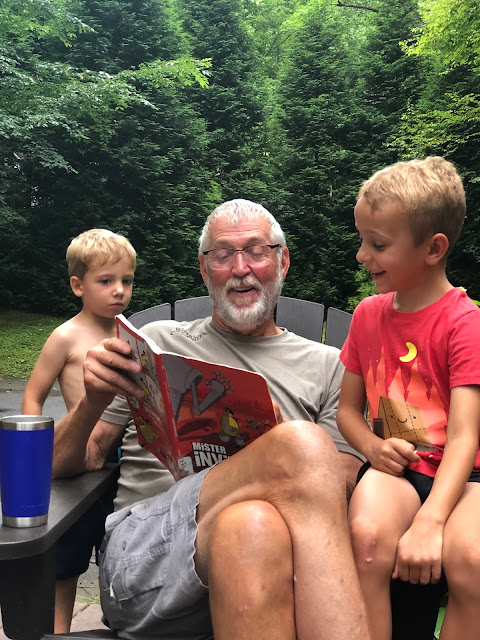 This morning we did go out for breakfast and did a little shopping downtown. 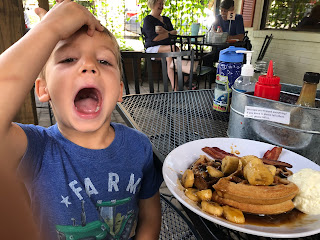 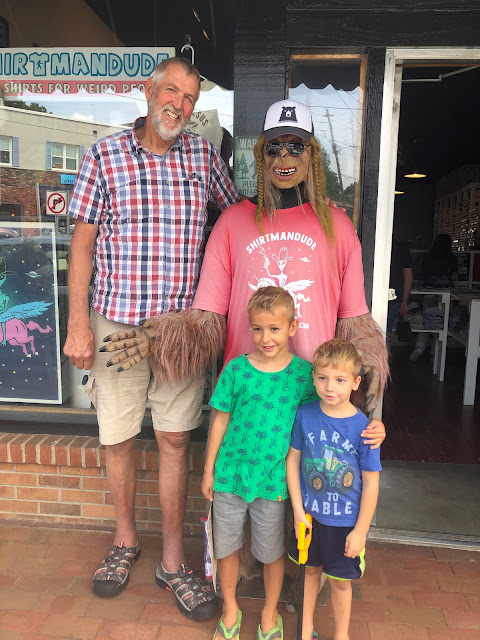 Posing with Sasquatch who is not as tall as Boppy.

And then because we could, we went to a thrift store that Jessie loves that has a cafe attached. I scored big there, spending three dollars total on a coffee mug with the perfect handle and a sterling silver (not kidding you) pin/broach shaped like a ribbon bow. It's not tiny, either. August and Levon got a toy each from downtown Black Mountain and a toy each at the thrift store. So they were very happy. And then this happened. 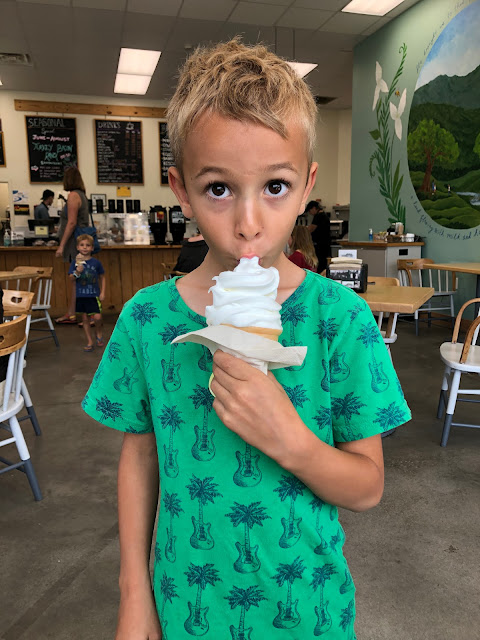 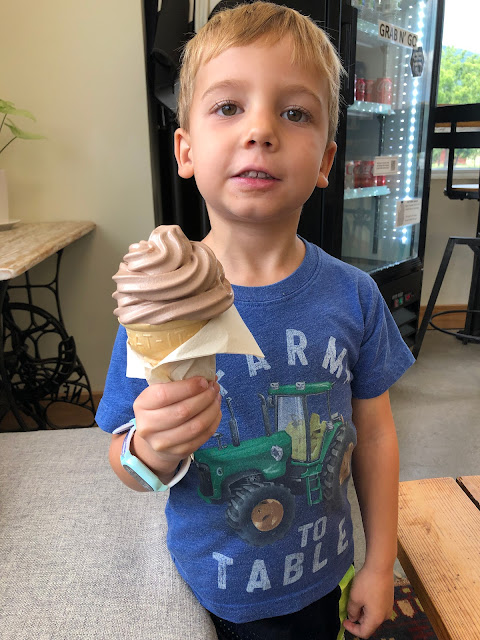 As Jessie said a few a minutes ago, "I think the boys are having a great vacation."
We all are. 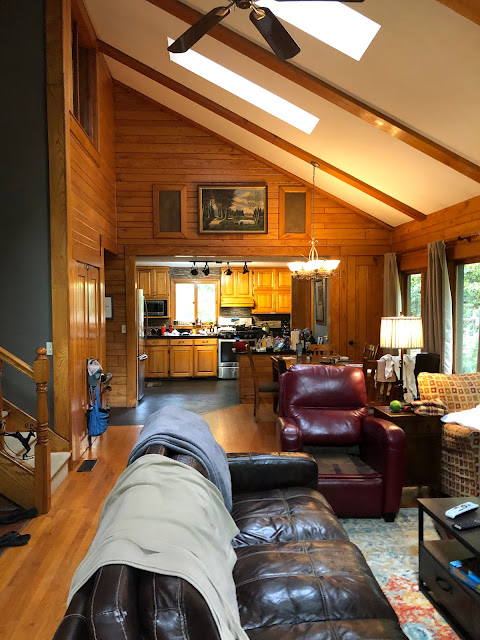