Honey, You Just Need A Martini. And A Little Bit Less Of A Martyr Complex

Well, the saga of the hormones is over. I have a month's worth with a 'script for another five months safely in the pharmacy's file and no, I did not have to go down to the office and before I say anything else let me say that I am so very grateful that I do have them.
However, I am not thrilled at how it happened.
Mr. Moon was out of town last night. He had traveled over to St. Augustine with Chip to pick up a motorcycle that he wanted to buy because he doesn't have enough projects to work on, as you know. And because- motorcycles. A friend of Chip's was selling it and Chip's lady love lives in St. Augustine so it was convenient for them to travel over to the Oldest City with a trailer to get the bike and for Chip to spend the night with his darlin'. Mr. Moon stayed at a hotel. He knew how important getting these hormones was for me, both physically and emotionally, and he called to see if the prescription had been called in yet. I told him that no, it had not.
"Do you want me to call them?" he asked.
I had told Chuck that I would bet anything that if my husband went down to the office, that 'script would be sent and that the idea of this enraged me. I told Glen what I'd said and then added that at this point, why not?
So he called them this morning and he is very, very good at getting people to get done what needs to get done in a diplomatic and polite way. He does have a gift and I'm not going to deny that. He now knows the name of every person in that office and within an hour and a half, the prescription had been sent.
For whatever reason, there is only ONE person in that office who can send in prescriptions electronically and she has been busy, I suppose. I don't really care what the excuse was, the pharmacy had been calling for over a week, I'd called, and nothing happened until Glen Moon called and that's a fact.
Again- I am not quite sure how to feel about this.
I suppose, enraged AND grateful.
So I went to town and picked up my box of life-saving little troches which are a sort of gummy-like way to deliver the goods. I do believe that the pharmacy was as relieved as I was to hand them over because I've been calling them about five times a day.

I came home and determined to make my fig preserves. Over the past few days I had picked almost six pounds of figs. This is the first year ever that this fig tree has produced enough figs to make even ONE pint of preserves. Fig preserves are relatively easy to make. I used two recipes, really, and consulted a few others just for more help with the process. They only have four ingredients in them- figs, lemon, water, and sugar. You soak the figs in boiling water for a few minutes and then drain them, de-stem them, and, if you want to- chop them a bit. You can leave them whole and I usually do but today I decided to change it up. I do not know why. They were quite roughly chopped, and the resulting pieces are still pretty chunky. I seeded and sliced a lemon and a half and then chopped that up rather more finely. The figs go into a big pot with the lemons, a shit ton of sugar, and a little bit of water, brought to a boil and then simmered until the whole thing is of the consistency to gel.
Hopefully. 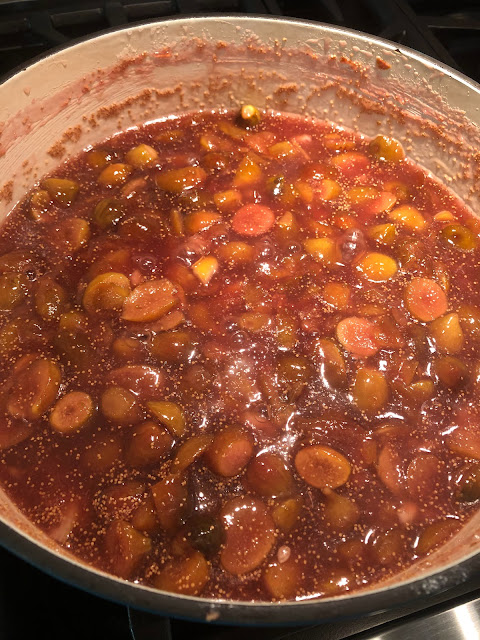 While all of that was going on, I was also sterilizing the jars in the canning kettle and the lids in a small pan.
I got five whole pints and two half-pints so, yeah, six pints in all. The lids were so eager to seal that most of them popped before I got them out of the canner rack. 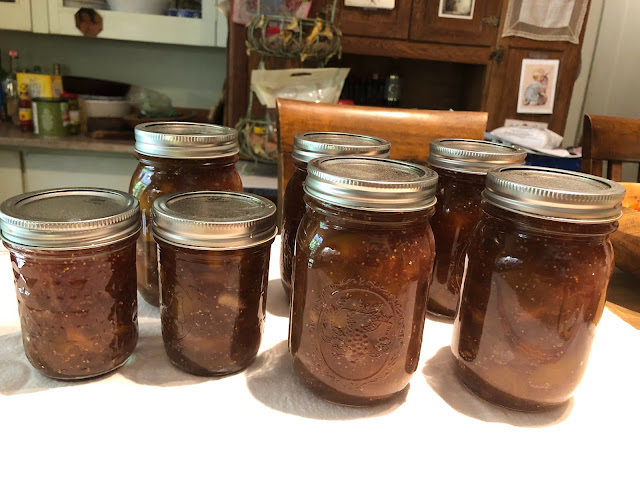 Biscuits are going to be even better around here now.
And I will proudly take a pint up to North Carolina.
Meanwhile, I have not cleaned out the hen house yet, which MUST be done before we leave, I have not picked and shelled more field peas which I also wanted to do so I could take enough with us to make a meal of those for the Weatherfords, I have not packed one darn thing, and, and, and...
I got the dress today that I ordered from eBay and I hemmed it. I like it. I did laundry and our bed has clean sheets as does the bed in the guest room. I have swept up a cat's worth of cat hair and a human's dust-to-dust volume of, well, dust. And sand.
My life-saving husband is home. He asked me please not to say anything about this motorcycle. I haven't even seen it but I am assuming it may look a bit rough. He knows I don't bitch about his projects. He's worked so hard all of our life together and if these things make him happy, I'm happy. The saying goes "happy wife, happy life" but the opposite is also true, even though it does not rhyme.
*****************
Mr. Moon just made us a martini. These new martini glasses are very awesome. I am bone-tired. It's been so damn hot that the AC can't keep up with it and while I was making the preserves, the kitchen got up to at least 85. I think about the women who made preserves in this house a hundred and fifty years ago and they had a wood stove and not so much as a battery operated fan AND had to haul their water from a well or a pump and I know I have no reason to complain, especially since I am doing this as a hobby and our winter intake of fruit will not depend on what I can get canned while it's in season. In other words- my choice. I want to do it. I don't need to do it. There is a difference. And I do love to it too so there is that.
I think about my blessed therapist who said to me so long ago, "I am interested in why you feel such a need to suffer?"
I never did come up with an answer for her but perhaps I need to start thinking about that again. In the meanwhile, I should stop bitching about getting tired out doing things I love to do.
We're supposed to get rain tonight and Lord, I hope we do.
Here's what it looked like last night when I went to put the chickens to bed. 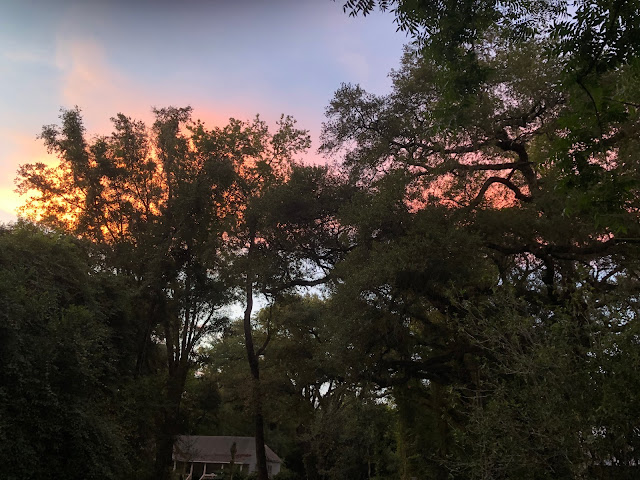