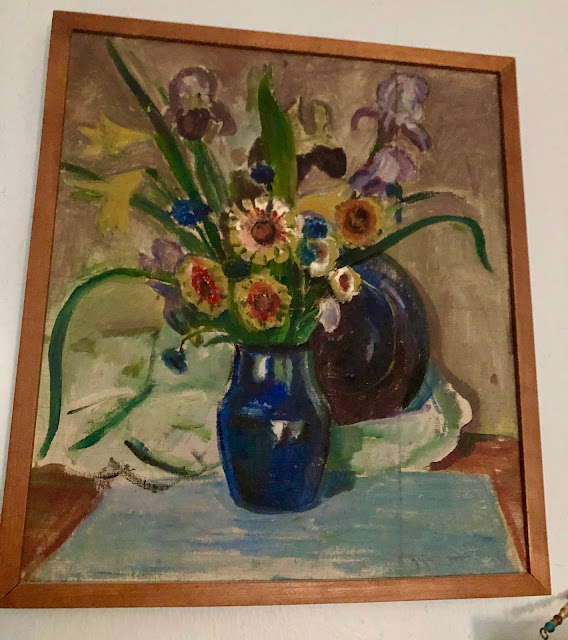 The only thing I did today that was worth mentioning was moving three pictures into our "new" bedroom. These are the pictures I feel I must have closest to me while I sleep. They are, I suppose, totems that make me feel more grounded in my own life so that when my dreams take me to places so far away, the pictures will be there, even in the dark, to call me home again to myself.

The one I took a picture of is a painting that my Uncle Jimmy did when he was a boy, taking art lessons from Frank Baisden. I've talked about this picture and my Uncle Jimmy and Frank Baisden before. Both men were well-known and well-regarded by their peers, Frank as an artist, Uncle Jimmy as an architect and designer. But that picture was done when Jimmy was very young and I remember it always hanging over my grandmother's bed and when she died, I asked for it and my mother gave it to me. I love it so. I can still clearly see in my mind my granny lying on her bed with her hands clasped together on top of the bedspread for her nap, her glasses with the hated, bulky hearing aids built in on the dresser, her tiny shoes on the floor beside her, that picture always present.
The other pictures I moved have other stories, of course. I did not take their pictures but I'm sure I have before. And now they are all back in the room where I am sleeping, keeping watch as I roam about the dream world, making sure of my safe return.

Mr. Moon should be home soon. He left Louisiana this morning. Speaking of sleep- I don't think he's gotten a good night of it since he left. I think he will be glad to come back to his own bed. Maurice slept on his pillow last night. She misses him, I can tell. A little while ago she came to me as if for comfort, licked my face and kissed me on the lips which I have never had another cat do in my life.
And then she wanted to tear my hand off. I always think of Where The Wild Things Are when she acts like this. Remember the part where the wild beasts tell Max, "We'll eat you up, we love you so?"
Now whether or not she really loves us so, I cannot tell you. But I can safely say that she is a wild thing.

When I put that picture up above the mantle in the bedroom, I had to take down a mirror that I'd put there. It had been my grandfather's. On the back of it I found this. 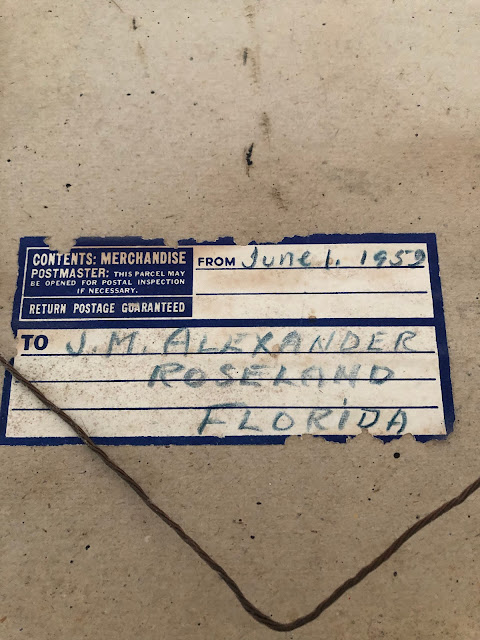 I would know that block print handwriting anywhere. Granddaddy put his name on all of his belongings. Or, at least many of them. In my grandmother's recipe box which I also have, I have found warranties for things bought long, long ago, now completely lost to time, filled out in that same hand. He was a man of order and precision. I am sure he framed the picture that Uncle Jimmy painted. He was a fine carpenter, even though he'd lost all the fingers on his left hand in an accident with a saw when he was first training to be a cabinet maker. I don't think those missing fingers ever stopped him from doing a thing.
I think back on him and he will always be a mystery to me.
I worked some more on my overalls today. I picked some more peppers and greens and made a little venison meatloaf that I'll put in the oven when I have a better idea of when my husband will be home. I'll put some baking potatoes in the oven too and that meal is one that my mother and grandmother both served at least once a week. Mother experimented with her meat loaves. Those were the days when every newspaper and magazine printed recipes for dishes made with ground beef- the thrifty housewife's best friend. They were endless. There were cookbooks too. "A Hundred And One Ways To Cook With Ground Beef!" I remember the period of time when my my mother started using a recipe for meatloaf that contained a can of Campbell's vegetable soup. Even as a young child I was aware the finding letters of the alphabet in the meatloaf was not right somehow. But I don't have a whole lot of room to criticize. My own favorite recipe uses a packet of Lipton's Beefy-Onion soup in it. And ketchup. And Pepperidge Farm breadcrumbs. And also peppers and onions.
But no noodles, shaped like letters or anything else. And also no bits of diced carrots or the occasional green pea. Honestly though, we ate that meatloaf and loved it. And although going to Europe when I was eighteen and then becoming a hippie and especially eating the hippie food at a restaurant in Denver called Hanuman's Conscious Cookery, and learning to love and cook the foods that are representative of the south inform the way I cook now, there are still times when I crave the things we ate when I was a child. Sometimes I'd love an iceberg lettuce salad with French dressing and sometimes, I crave a grilled cheese made with Wonder Bread and American cheese or Velveeta or a big bowl of Kraft macaroni and cheese. Other foods bring back memories although I do not truly care to go back and eat them- bologna sandwiches for one thing. My Lord but we ate a lot of bologna. I had a friend once who said that her mother had made bologna salad like tuna salad, substituting chopped bologna for the fish. I'll be quite happy if I never eat instant mashed potatoes again. Or frozen mixed vegetables.
I'd eat a fish stick though. Or a Mexican Hat made with a slice of bologna as a base and then a scoop of real mashed potatoes, topped with cheese and then baked.
Food represents so much to us, doesn't it? Sustenance, of course. Love. Comfort. Celebration.
Guilt.
It's complicated. Just like all our human stuff.
Love...Ms. Moon
Posted by Ms. Moon at 6:25 PM