All Is Fairly Well 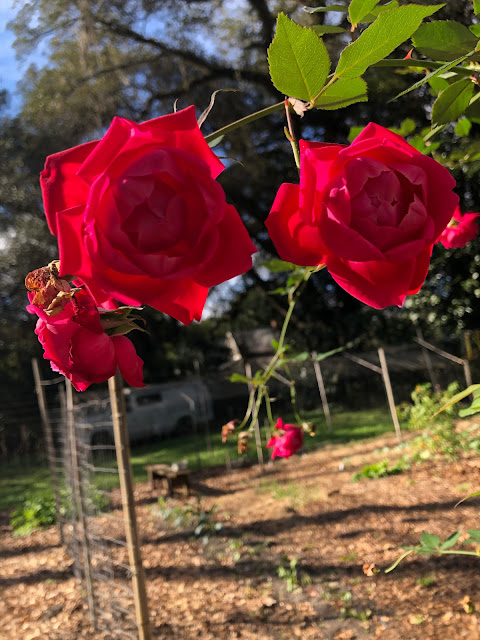 I swear I have more roses blooming right now than I had all spring and summer. It's crazy. And crazy beautiful. Although I have a desire to pick some and bring them into the house, they just seem so happy where they are that I can't bring myself to do it.

Found my dresses. Theoretically. I went down to the post office this morning and talked to the post mistress who got on the phone to Monticello where, as you may recall, they got sent and supposedly returned to sender. The problem was simple and yet, somehow, complicated.
April Cornell, whom I ordered the dresses from, had requested a physical address, not a post office box. Okay. We do have one of those and even a mailbox out front. We can get mail either way. BUT, our physical address is not Lloyd, Florida, it is Monticello, Florida with a different zip code than the PO box address. As I have said before, although there is a post office in Lloyd, there is only one real legal town in all of Jefferson County and it is Monticello. So when I gave April Cornell my address, I gave the physical address with the correct zip code, but I wrote "Lloyd" instead of "Monticello."
You with me?
When the package got to Monticello (and don't ask me how it got there to begin with- the zip code?) they had no record of the physical address with the wrong city listed.
Now you'd THINK that they could have figured it out. Lloyd is about twelve miles from Monticello and everyone in Monticello knows where Lloyd is and let us not forget that my physical address is XXXX, Old Lloyd Road.
But no, and besides that, no mail is shipped to the Lloyd post office from Monticello. It all comes from Tallahassee.
The post mistress explained all of this to me and told the Monticello post office NOT to return the package and that I would come and pick it up after I told her that I would. So I'll be doing that tomorrow.
I think that the odds of them not having sent it back anyway, are about 50-50. And of course, neither dress may fit and/or I may not like one or both.
But it's an adventure! 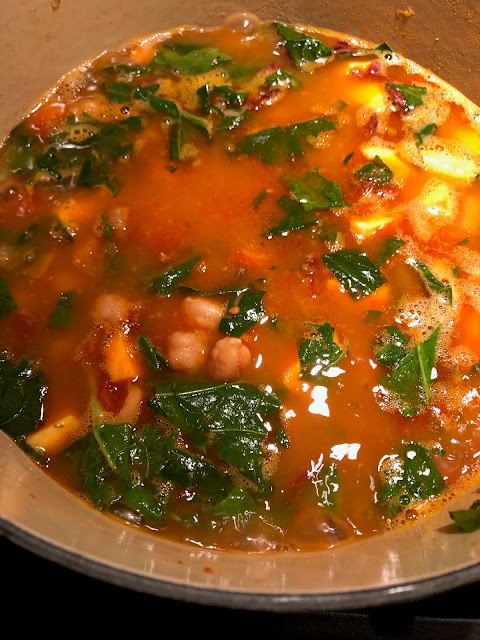 I think it will be good. I had to cook it in the pressure cooker for awhile because garbanzo beans take eight days to cook in my experience. The sausage is venison sausage, the greens are from the garden, and the sweet potatoes are too. Remember our tiny volunteer sweet potato harvest? I'm finally using them.
I worked in the garden a little bit this afternoon and fiddled with the soup all day. Also sourdough, of course, which was started early this morning. Well, not that early to be honest. I used the hot pad set on low wrapped in a towel method to coax it along. It looks to be lovely.
AND! The refrigerator repair man showed up and despite several set-backs with his equipment, he has the new compressor on, the new software running, and hopefully by tomorrow I'll be able to use the official refrigerator again. Now- let's see how long it takes to get that other refrigerator out of the hallway. We're going to need two men and a boy (one of my favorite expressions) to do the job or, to be more accurate, one man and a boy (Owen).
Tomorrow Magnolia June will be six years old! A dinner at a local Mexican restaurant is planned where we can sit outside. Not El Patron but the same restaurant where Maggie's gender reveal party was held which is sweet although gender reveals have more than one meaning in this family. Perhaps we should have called it a "genital reveal".
And so it has gone, another day in my life. A problem researched and possibly figured out, some clothes washed, dried, and put away, roses admired, weeds pulled, a chat with a repairman, a soup and a bread made, eggs gathered, greens picked, things cut up with my brand new and already beloved knife.
I have only cut myself two tiny times with it!
Not a bad day.
Love...Ms. Moon
Posted by Ms. Moon at 6:22 PM