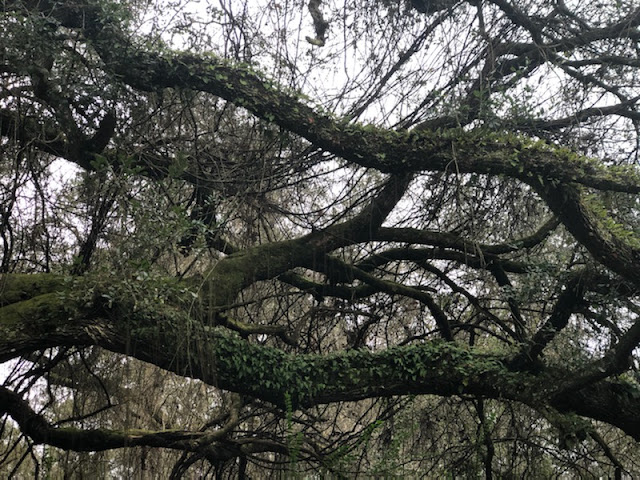 I ran out of excuses to take a walk this morning although that hasn't stopped me in ages from continuing my slothful ways. I put on my very non-stylish walking clothes and shoes and appeared in the Glen Den. My husband looked up in astonishment.
"I guess I'm going to see if I can still walk a mile," I said, with very, very little enthusiasm.

I did manage to walk a mile and then some and it was fine. Still, I can definitely tell that I have been neglecting that part of myself for awhile. It was overcast and muggy as hell and I was sweating by the time I got home. The branches you see above are part of a truly beautiful and rather spooky old oak tree just down the road. 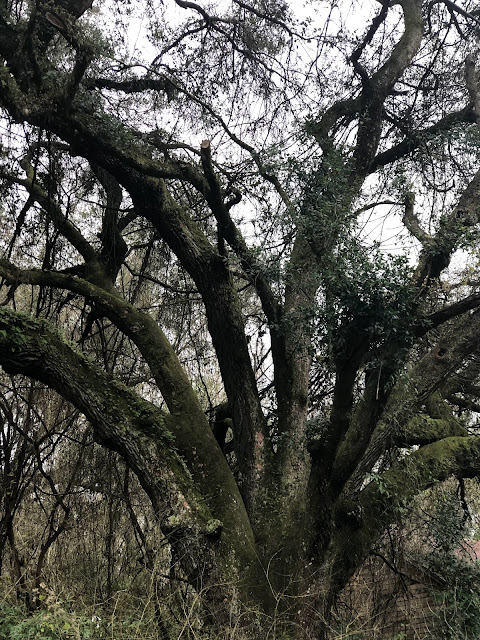 I may not be enjoying the high humidity we're experiencing right now but the resurrection fern growing on its gnarled and twisting branches appears to be quite happy.
I decided to walk down to Lloyd Creek, or at least a branch of it. The creek was still and there was some trash floating in it. But, it is water. 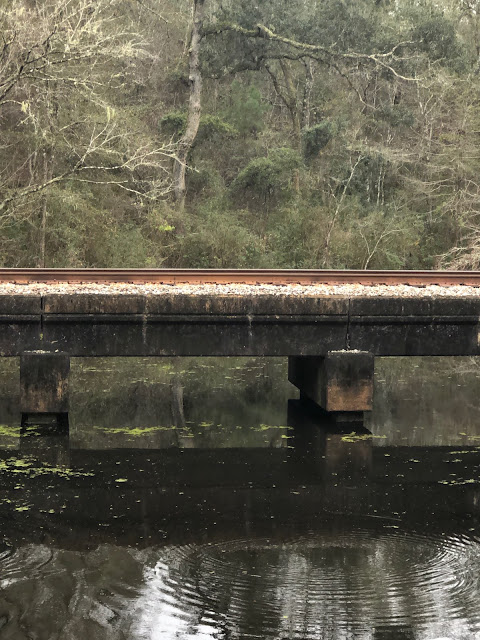 The railroad trestle goes over it.
All right- let's have a report on the air fried chicken, shall we? I cut the two boneless, skinless breasts I had in half because they were Dolly Parton sized (and I don't think that Dolly would mind if she knew I called them that because she is a saint with a grand sense of humor about her gorgeous and generous bosoms) and dipped them in flour, then beaten egg, and then panko crumbs with salt and pepper and a few spices and I put them in the small magic oven box and set the time and temperature and function and they came out quite well! Crispy outside and very tender inside. In fact, we are going to have the other two pieces tonight, transformed into a sort of chicken parmigiana.
I was not displeased.
And it takes far less time than the big oven. Only a few moments to preheat instead of a good chunk of time, and then a few moments to cook. So that's nice. And this morning I used the toast function for my cheese toast and that took about a tenth of the time my old toaster oven took.
I am pleased. I will become more familiar and comfortable with it as time goes on but so far, any problems have been due to user error, not the product itself.
Speaking of appliances- the refrigerator repairman showed up today. It's the compressor and this seems to be a major flaw in this particular brand. However, the warranty for the compressor is good for five years, parts and labor, so I am not too upset. Now if I didn't have a refrigerator in the hallway, I'd be screaming, but as it is, it's just a minor inconvenience. We are scheduled for repair a week from Thursday which seems like a long time but it'll go fast. Supposedly, the company has redesigned the compressor entirely and eliminated the problem which is very good because I do love that refrigerator. It's size and ease of use and the way it's set up is a joy.
It's been a nice, slow, easy day for me and I feel as if it's been the first day of true relaxation I've had since way before Christmas. I will have to go back to town tomorrow to pick up a prescription and also to go to Publix to buy steaks because Owen is spending the night Thursday and steak is what he wants.
With onion rings.
Which I will cook in the air fryer!
He and Boppy are not going fishing as planned because the seas look to be too rough but instead, Owen is going to help his grandfather with a project or two, earning money in the doing. I am not sure why but it warms a place in my heart that I did not know was there for him to work with his Boppy on jobs that need to be done. This is a part of being a grandparent that I did not foresee or envision when he was born but it is a sweet one. He is such a dear boy.
I always think of the time when he was just a little guy and he said to me one day, "Mer, did you know that sometimes when people get really, really old, they have to wear diapers?"
"Yes," I said. "I know that."
"Well, what I want to know is, who changes those diapers?" he asked me.
"Their grandchildren!" I replied, as seriously as I could. The look on his face. He was so horrified.
"Not really," I assured him. And truthfully, that is one task that he will not be assigned. But I do wonder if he thinks of that.
I hope I did not traumatize him for life.
On we go.
Love...Ms. Moon
Posted by Ms. Moon at 6:15 PM