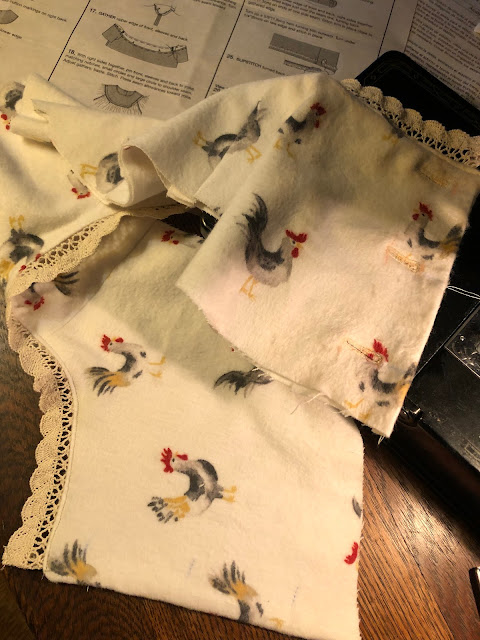 I made some progress on the nightgown today. It's hard to see but I even got the three buttonholes put in. The buttonholer I use (gotta be careful with that word, eh?) is such a clunky old thing and it isn't a Singer product but made by a company called Greist. Oddly enough, our family was briefly related to the Greist (of buttonholer fame) family. It's not my story to tell but anyway, those are the barest of bones and it is true.

And it is also true that although the attachment is clunky, it makes fine buttonholes and I can't help but get a little thrill every time I manage to put it all together on my machine and use it correctly. Once you have it set where it needs to go on the garment, you just mash the pedal with your foot and as if by loud, clicky, magic a buttonhole is created right before your very eyes!
So except for sewing on the buttons, the yoke of the nightgown is finished. I am afraid that I did not buy enough of the pretty trim as by the time I was giving the cutting lady my requirements, my brain was rattling around in my head like a BB in a coconut, completely overstimulated by the amount of merchandise, the people, the choices I had been making. For those of you who have never sewed a garment, one does not just buy a pattern and the material. You have to have the notions, as well. I love that word in sewing. Notions.
Notions are things like thread and trimming, elastic, and buttons. I've always loved buying the notions, matching the thread color to the fabric as closely as possible, picking out the fancy stuff. But yesterday the aisle of laces and trims just overwhelmed me completely. I do like what I bought, though, and if it's not enough, well, either the sleeves or the hem won't have any.
The world will go on.

Besides working on that today I did a little garden mulching and cleaned out the hen house. Fresh straw for all! I really do want to spend more time outside, trimming and fertilizing, cutting back and pruning, weeding and tending. I haven't trimmed back the GeeDee confederate jasmine on the fence in two years and that stuff is going to take the fence DOWN if I don't do it this winter. Now that is a messy job as the plant seeps a milky, sticky sap when it is cut and the tendrils of it get so thick and so twisted and braided among itself that it's like a puzzle, trying to figure out where to use the pruners to my best advantage.
I'll get to it eventually, I'm sure.

Mr. Moon is going to a basketball game at the ridiculously late time of 9:00 tonight which means he'll be leaving here around eight. I've made up a lasagna sort-of casserole to pop into the oven so that he won't have to rush his supper.
The phrase "pop into the oven" makes me feel like Betty Fucking Crocker when I use it. Can't you just see me as a brunette with a clean, starched, red apron on, wearing semi-high heels, pearls, and oven mitts, sliding a lovely casserole into the oven?
Yeah, me either.
The weather is so warm today that I put on an old sleeveless dress that's missing a few buttons with a shirt that has literally worn itself into threads in a few places and when my husband came in the house and first laid eyes on me he said, "Are you going to town?"
This is how low I have sunk in the sartorial department. If I'm not wearing overalls and a holey shirt, then obviously I must be going to town. I feel so sorry for my husband. I remember when I first started feeling invisible due to age and how I resented it. Now I wish I WAS invisible and I dress as if that were the case. As if no one, not even my husband, could see me.

Well, I guess I better go pop that bad boy in the oven. And by the way- I do not even own an oven mitt. Which reminds me- I need to crochet some more potholders.
My work is just never done, is it?
(Irony intended.)