See That Big L On My Forehead? 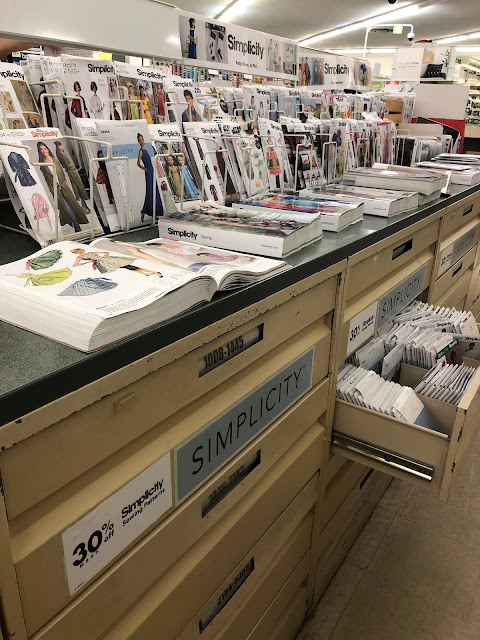 Today was going to be the day! Christmas shopping! Hell, I was even thinking about going to the mall which I have not done in years.
YEARS!
But first, something easy. I stopped by Joann's again to get some more trim for Maggie's nightgown and while I was there, the brilliant idea hit me that Glen would probably just love a new pair of pajama/lounging pants made from fleece or flannel. Easy peasy! Right? Sure!
So I looked at patterns and then spent approximately twenty minutes trying to find the pattern I wanted. Do any of you remember when the pattern drawers were as neatly and accurately arranged as the card catalogue at the library?
Well, those days are over.
It's a mess.
I found a pattern I thought I liked but it didn't have pockets so I found another one and then I searched the shelves for fabric that I thought would do and found some and then checked the pattern and it said that only stretch knits would work so I said, (come on- I bet you know what I said!) fuck it.

I did buy the trim although they didn't have enough of the one I'd bought before so again, in the fuck it mode, I just bought some that was quite similar. When the lady at the cutting counter asked me how I was doing today I started laughing and then she did too and said, "I hear you! I think you and I should go next door and discuss this."
Next door is a Mexican restaurant and I said, "Over margaritas?"
"Uh-huh. Exactly."
I think we cheered each other up although we did not go get margaritas. I wish we could have. I think we would have enjoyed each other's company tremendously.

Then I met Mr. Moon for lunch where we both mostly sighed and moaned (he's Christmas shopping too) and then I went to Publix and then I came home. I just couldn't do more than that. So for all my efforts I got two yards of trim that isn't exactly what I even wanted.
Go ahead. Laugh.

Once I got everything put away here I started in with the seam ripper because yes, I did indeed sew the yoke and bodice together wrong. Well, not really. I just had the trim going the wrong way. I told you I'm spatially challenged. So I'm way behind on getting Maggie's nightgown made.
Whatever.

Oh. Here's a terrible picture of some gorgeous blooming angel trumpet. I stopped the car in the middle of the road to take it. I should have stopped longer and tried focusing. 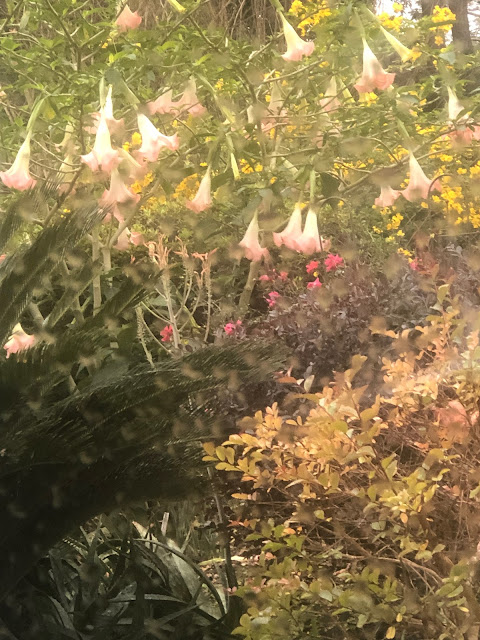 The whole yard was pretty impressive but the angel trumpets were the best in my opinion.

The temperature has dropped thirty degrees in the last twenty-four hours so instead of it being hot and gloomy and muggy it's now gloomy and still humid. And getting chilly. It's been raining the tiniest bit on and off all day. Not my favorite kind of weather.
But all of these things are just silly and I don't really mind the weather that much and the fact that I'm panicking about Christmas is no one's fault but my own and I know it. Not that knowing it helps one bit and in fact, just makes me feel worse because I did this to myself.
And here we are and here I am and I guess I'll go make us some supper. We've been watching "Yellowstone" in the evenings because my husband saw an episode of it when he was in Tennessee and he liked it and everyone told him how great it was and I am having the hardest time enjoying it at all. I feel no empathy for any of the characters and most of them are just terrifically unlikeable. It's a soap opera and it's all about men and their manly ways which include property owning and defending, fighting, killing, and being manly.
In short- patriarchal out the yang.
Even my husband is disappointed. I think we've watched four episodes and I'm going to give it one more shot and if something amazing doesn't happen I'm done.
That's the news from Lloyd, Florida tonight.
Love you to pieces...Ms. Moon