As God Is My Witness 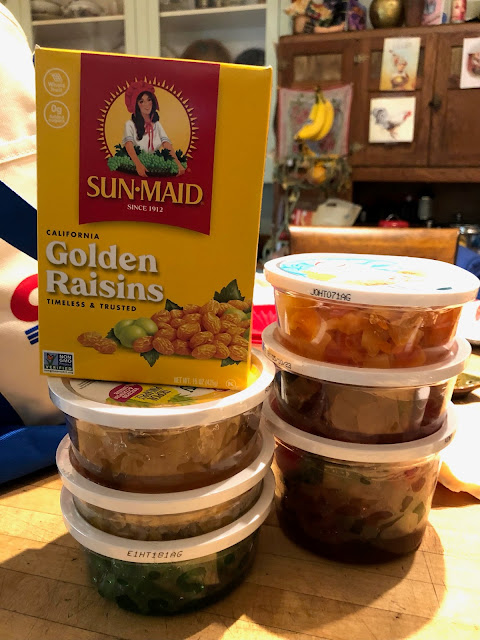 There will be some damn fruitcake in this house for Christmas!
I was back in Costco today and this time I asked a lady in the bakery department if they had any fruitcakes. She told me that no, they weren't making them this year. I asked why. She said, "Because no one bought them last year."
Well I tell you what, lady! I did!
So when I went to Publix I bought the fruit. I was afraid that they didn't have any. I had to search high and low and finally found it on my way to ask an employee where it might be. There are a lot of gaps on the shelves right now and it would not have surprised me if candied fruit and citrus peel hadn't made it to the stores this year. But there it was and I bought a bountiful plenty.

It was a good day, overall. Jessie was hankering to go try Chow Time, the newish buffet that I talked about a few weeks ago. The place that looks like a movie theater or a casino with about half an acre of food. So Lily joined up with us and Levon came along too and we feasted. We did not leave feeling like the man whom we saw coming out who stopped for a second, tried to pull his pants all the way up and said, "Oh my god," before heading to his car. But we were sated, shall we say.
I should have stopped after my sushi and hot and sour soup. But of course I didn't. I had to eat at least a few of the other things. Levon was the one who really surprised me. He ate (and this is what I can recall) macaroni and cheese, chicken, green beans, french fries, a piece of pizza, and about six kinds of dessert. He and I decided that we like pudding even better than we like ice cream.
It was a good lunch and we got to talk and share some things that have been roiling the waters of our souls and of course we laughed a lot and there were a few tears. Not Levon's. He was a happy guy.

When we left, I made them pose for a picture in front of the Christmas tree. 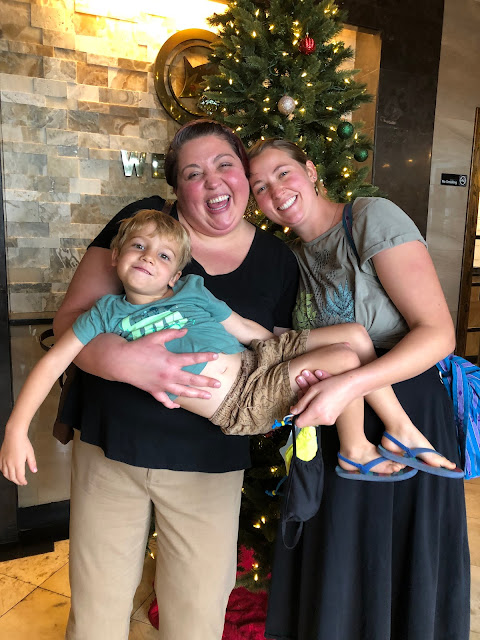 So that was a hoot and then I went to Costco and wandered around looking vaguely for gift ideas. I sent a picture of a Lego set to Lily and asked if either of her boys would like it and she sent me back a message that she had no idea and then I sent Jessie a picture of a building set and asked if HER boys would like that and she said that I gave August and Levon the exact same set last year which of course I had no memory of although now that I think about it, yeah. I did.
I got to see Brenda and she gave me the BEST HUG EVER!
So all was not lost. Her hugs just stick with you.

On to Publix where I noticed this sign for the first time. 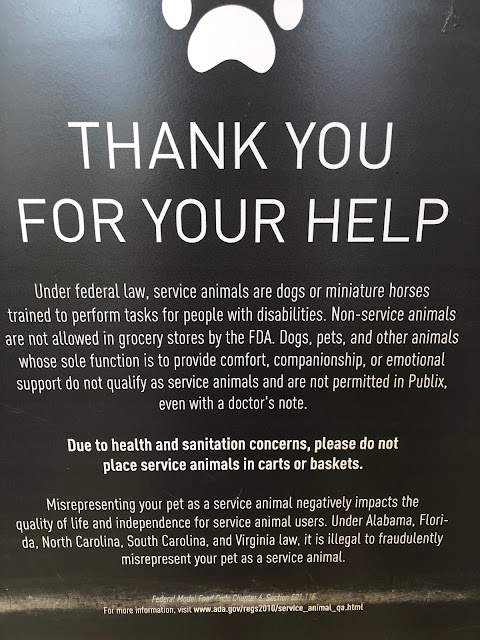 I have so many questions. How long has that sign been there? When did miniature horses become service animals? How did that happen? Can a miniature horse bring you your phone in its mouth? Or, you know- a banana or something to eat? If miniature horses can be trained as service animals, why not miniature donkeys? Why not monkeys? Hell, they have hands! And parrots! They can even talk human!
But honestly, people have been getting away with saying that their beloved pupsters are service animals that they need for emotional support and although I can completely understand that, it's just a way for folks to bring them to the store with them. Which, quite frankly, I don't mind but things could get out of hand, I suppose. There was that German Shepherd on St. George Island that killed a chihuahua a few months ago in a beach bar. I mean, that's traumatizing, to say the least.
And that was my day. I'll make the fruitcakes tomorrow and no, they will not have time to soak in rum before Christmas but dammit, un-soaked fruitcake is better than no fruitcake.
And quite frankly, I am looking forward to getting out the old recipe and creaming butter and sugar and eggs and folding in the fruits.
Christmas has been saved.
By me. The agnostic/atheist.
Just don't ask me to sing any Christmas carols, okay? Because I fucking won't do it.
Love...Ms. Moon
Posted by Ms. Moon at 6:02 PM