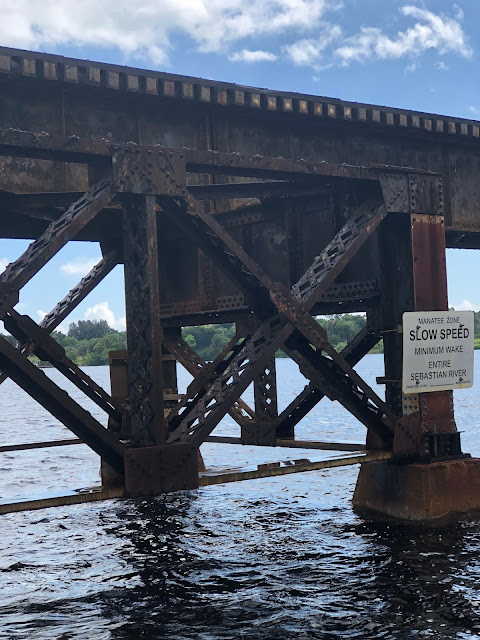 I am back to feeling a bit flat today but that is to be expected. First of all- we are leaving tomorrow morning. Secondly, the so-very anticipated river journey was not as it used to be and although I am loathe to be one of those people who disdain the new in service of the old, in this case that would be completely rational.

When I took the river cruise before, the boat made a leisurely journey up the south fork of the Sebastian River, thus providing views of beautiful homes on one side and of the river islands on the other. There is even a huge home and compound on an island that has, if I recall correctly, a helicopter pad. I'm not talking about a Koreshian type of compound but a fabulously wealthy family's compound, a fantasy of beautiful houses tucked away in trees and mangroves.
However, now there is only a trip down the north fork of the river which is fine but not nearly as interesting. Especially if you're from Florida. 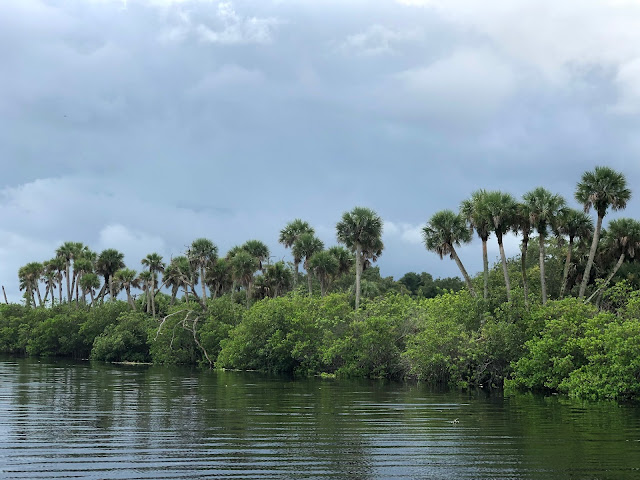 I mean- that's beautiful, right? Of course. But it seems like there was even less wildlife to see on this fork. We saw a manatee, one dolphin out in the Indian River, and some birds. I had just realized that we were not going to do a lap of the north fork when an alligator was spotted and I could not be moved to even stand up and look.
Please. I see alligators every time I go swimming.
Almost. But still.
Mr. Moon reports that it was very small.
Pffft.
We did pass through the old trestle bridge and as you can see- it has served its time.
And here is a lovely osprey, taking a rest from his fishing. 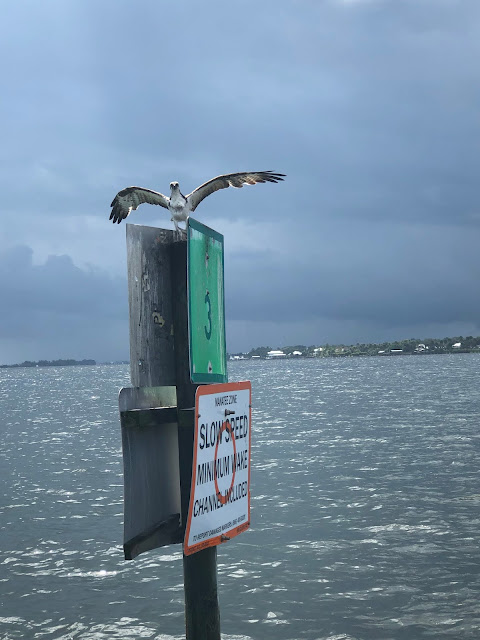 The man who did most of the talking for the tour told me that the company that owns the boats and business did not want the boats to go up the north fork anymore. He did not give a reason but said that the captain was fighting it.
I bet.
I imagine the residents with their palatial and very private homes may dislike having peons from a pontoon boat gawking at their houses, yards, pools, and docks twice a day although I have never once seen a person down by the river on these cruises. And in fact, whether on the Sebastian River or on the Indian River, the largest and most McPalaced homes appear to be shuttered and shut for hurricane season with no sign of human life. I guess people build or buy these things and visit them for a few days or weeks a year, meanwhile forcing the price of that waterfront up so high that people like the Judahs who owned fish houses and lived right there on the property for generations are unable to afford to keep their family homes and businesses.
We passed some beachfront houses yesterday that were ridiculous in both size and design. Who ARE these people who build such monstrosities? These buildings are no more homes than a movie set would be and many of the real estate signs say "Sothebys".
Don't get me wrong. There are many old, gracious, graceful and beautiful homes that appear to be loved and lived in and some of those have been around since I was a child. And those are the ones I wanted to see today.
Well. La-di-dah.
Roseland proper, here where I grew up, mostly has small and very old and very humble little houses. As I have said before, many of them look better now than they did when I was a child sixty years ago which amazes me. But they are definitely NOT mansions. The place we are staying was once an estate but the big house burned down a long, long time ago and the house that was built in its place is a nice house but it is nothing fancy. The cabana house and the pool, the stucco arches and the ironwork gates are remnants of those old, old days and I love the men who own this place who have not tried to completely defunkify it but have incorporated the old within the new to create a work of art that is livable and comfortable and I think- very, very beautiful.
Here's what the living room of the cabana house looks like. 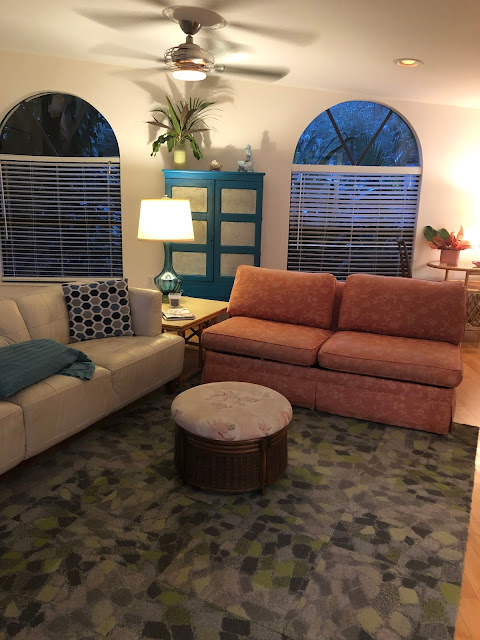 There are lovely and simple elements everywhere that make it so very Florida, so very charming, so very comfortable. 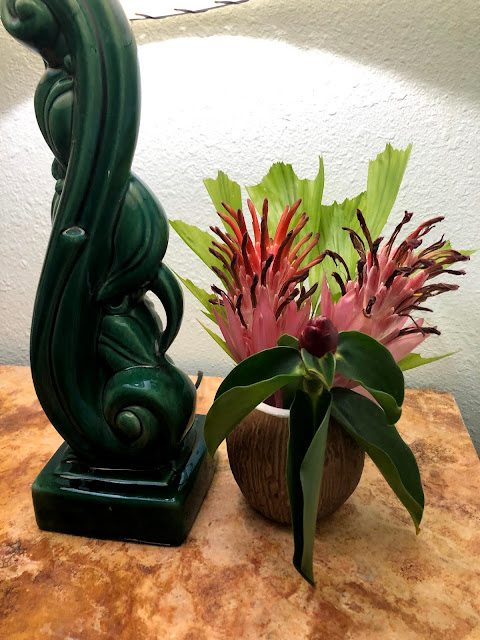 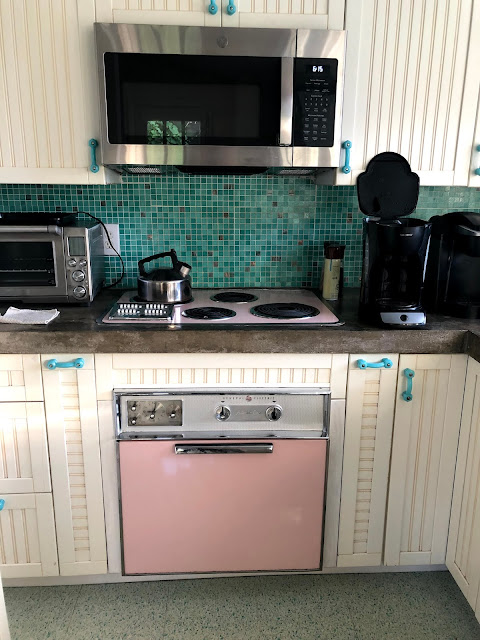 One of the owners is obviously a master at finding things that fit into the time and place and space he has envisioned. I am in awe.
Not to mention in love.
We haven't even gone swimming today. I have a feeling that before I go to bed tonight, though, I will have been in the pool. The luxury of swimming under the stars with the lions keeping watch is one of the most pure joys I have ever experienced.
Almost time for sunset. 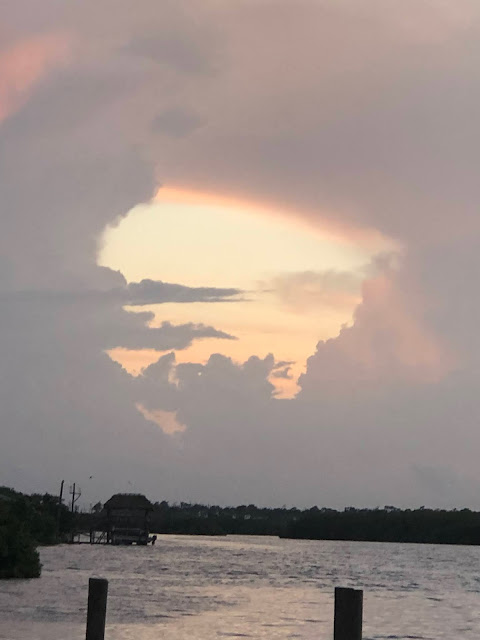