Friday Is Upon Us 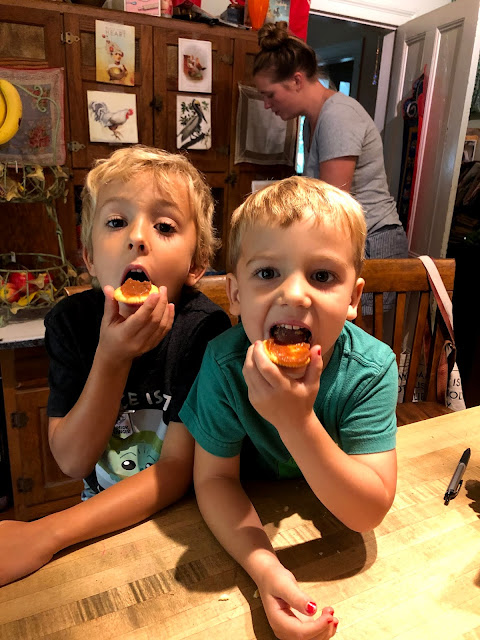 Our dear Beth Coyote sent me a box which arrived today and in it was a jar of apple butter that she'd made and a jar of elderberry syrup which is more than appreciated in these times of needing to do everything we can to protect ourselves against illness. Levon and August came over with their mama and when they saw the apple butter they demanded some right then and of course I opened up the jar and we all had tastes. Well, the boys had more than tastes. Levon was eating an apple when I first opened it and he wanted some apple butter on it and why not? And then out came the crackers and they ate those as fast as I could spread the apple butter on them. So good.

I am so very happy with the pepper jelly I made yesterday that I am thinking that if I get enough peppers I'll make more. And here I was, complaining about how we'd planted way too many peppers.
Live and learn.
It's just delicious!

Mr. Moon's quick test yesterday came back negative which we can all be grateful for but we got another little scare today. August felt warm to me but Jessie had already been having a hard day and I didn't want to say anything but then later, after I'd read the boys some books and I had Levon cuddled up on one side of me and August on the other, it was quite apparent that August was far hotter than his brother. So I told Jessie and she said, "You know, I thought he felt warm this morning too but I took his temperature and he didn't have any." And then she felt him and agreed that yes, he felt a bit feverish. He was acting fine. Jessie went down to the food truck that's parked at the old truck stop site on Fridays, Saturdays, and Sundays and brought us back some delicious lunches and August ate with gusto.

They had to leave after lunch because Jessie was taking the last puppy to his new mommy, who ended up being a woman Jessie knew in high school. In fact, all my kids know her and they all say that she'll be a great dog mommy. But after that, Jessie took August to get tested for covid (do we even need to add the "for covid" part anymore?) and thank all the gods and goddesses, he too tested negative. Of course, these are just the quick tests but...
She thinks he may have a sinus infection. That poor boy. His sinuses are always bothering him. I think she's going to get him tested for allergies.

Anyway, I was so relieved to hear that his test came back negative. I fervently hope that they okay a vaccine for children soon. I do appreciate that they seem not to be rushing it more than is medically appropriate but wouldn't it be wonderful if one became available within the year?
I want my babies safe. I want ALL the babies safe.

I'd like to thank all of you who commented about your cats (and sometimes dogs) speaking human. It's so funny that we have no doubts about parrots and some corvids being able to speak but to say that our other pets might actually be able to, may even be capable of communicating appropriately with language, is viewed as just this side of crazypants.
Whatever.
I see nothing woo-woo about any of this. It's like having a sixth sense or absolutely having moments of precognition- I think these are just things that humans do indeed have which have evolved as necessary to our survival and science just hasn't figured them out yet.

Of course, I don't know shit and I could very well be wrong.

However, unless I am mistaken, I am sure that it is Friday and time for a martini.