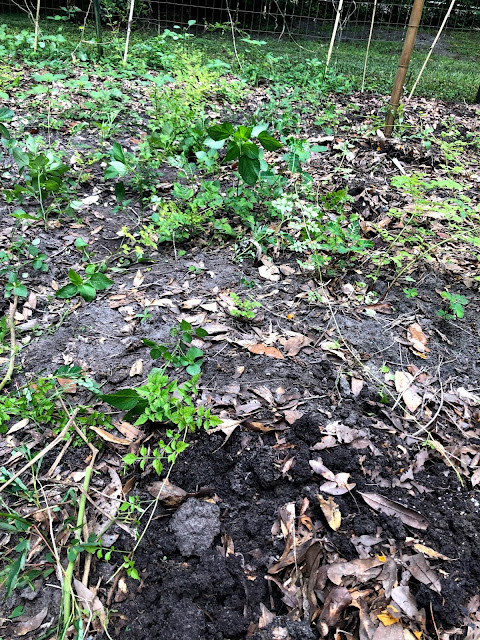 Not a pretty picture but basically what I looked at for a few hours today. I was working in the garden, again trying to get it ready for the fall garden by pulling spent plants and weeds, taking out tomato cages and hauling the detritus to the burn pile. The GeeDee trumpet vines are overtaking the entire garden and I am in despair about that. I've read a few articles on the web about how to take control of them but they really don't offer much hope. One I read advises that vinegar or boiling water may be used to get rid of them but then goes on to say:

Dig Up All Of The Roots

If you want to kill the plant, you’ll need to remove the roots completely. This may be an impossible task.

I have to say that I think it is an impossible task. The roots are thick and go deep and are connected to all of the other roots. I have never yet successfully dug a root and followed it to another plant which one can do with things like dollar weed and betony. My palms are red and swollen from hitting my trowel, trying to push it deeper into the ground.

And so even as I clear bigger and bigger swatches of the garden, I can easily visualize the living and thriving network of the vine's roots, pushing its way through the dirt to reemerge with more and more plants.
Why is it that the invasive things are always the most determined to live? The strongest and most persistent?
There are many metaphors to be found here.

I think we could dig the entire garden down deep enough to put in a swimming pool and eventually, the fucking tulip vines would be pushing their way through the cement of the pool, thriving and jiving in the chlorinated waters where we swim, reaching out to catch our ankles, our wrists, drowning us with their enthusiastic life.

Ah well.
So let me ask you this- if we do not really NEED a garden, if it is just a happy folly of ours to keep us busy and give us food that we could actually buy at the store, are things like trumpet vines a first world problem? If they overtook a family's garden in, oh, well, a third world country where they depended on what they grew for their very sustenance, that would definitely be a third world problem.
There is no way around it. Here in Lloyd in the Moon's yard, a garden being overtaken by an invasive plant is a first world problem if for no other reason than that we live in a a first world.
Tell that to No Man Lord.
But that's another story, another conundrum, another shame on our society.

I think it is quite obvious that I don't really have much to talk about today. It has been a regular day in a regular life. I have worked in a regular garden, cursing at regular weeds and delighting in the sight of so many regular earthworms, while regular chickens came and checked in on me regularly, hoping that I might throw them some delicious grubs or beans. 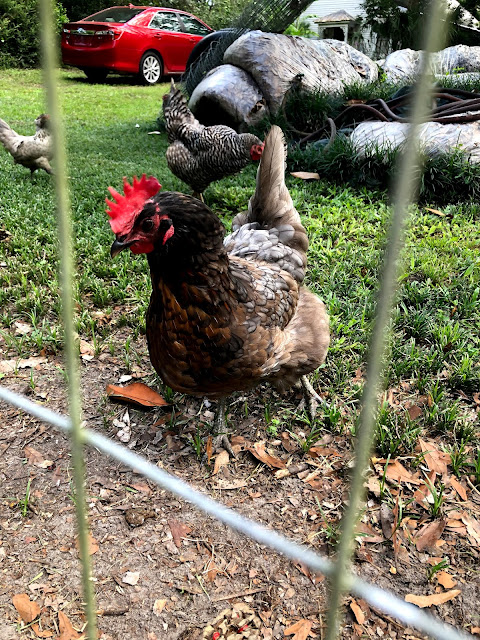 I am not complaining in the least.
And now I will go make some regular spaghetti for my darling love.
There is nothing mundane about him, I assure you. As evidence I present to you the fact that he has put up with me and loved me sweetly since 1983.
And I am still amazed and in wonderment about that fact.
Love...Ms. Moon
Posted by Ms. Moon at 5:57 PM