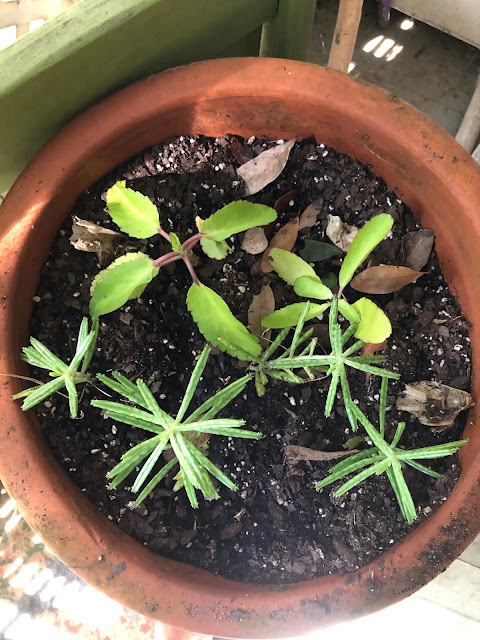 Every time I go to Roseland I dig up these two types of succulents from a spot near the house we used to live in. They still grow in that same place, sixty years later. For whatever reason, the ones I try and transplant here just never make it but I am not giving up. They are supposedly indestructible succulents but although I mostly do not kill my plants, succulents are my weak spot. Perhaps these will make it. They're pretty, aren't they? The rather pointy looking one is called "Mother of Millions". Seems like she'd grow for me, doesn't it?

Thank all of you for your comments on yesterday's post. I am humbled. It was quite an experience, really, and one I'd rather not ever try to replicate, but for what it was, it was the best it could have been, I think. The timing- what if it had happened the day before when we were on the road? And also the time of day. Getting into surgery so quickly and easily was amazing. I didn't have to go to bed the night before, worrying like crazy about getting up the next morning and having to be at the hospital at six a.m. or anything like that.
Just...problem... problem diagnosed... problem solved.

And like I keep saying- the people were all so very nice. And interesting! Perhaps it is a sign that one needs more human interaction when one finds pleasure in talking to people who are caring for her when she's in the midst of an appendicitis episode.
After the morphine took effect, of course. I wasn't too happy about any of them before that to be honest.
Maybe I just need to do more drugs.
Speaking of which- my surgeon prescribed me thirty hydrocodone. Excuse me?
Isn't there some sort of opioid addiction crisis? I haven't even needed an Ibuprofen today. Seriously. I took my bandages off this morning. I have three small incisions. Tiny. I will take a shower tonight.
I have done more laundry today and changed my sheets. I'm sort of obsessed with clean sheets, aren't I? I walked out to the garden and picked zinnias (still blooming!) and two pockets-full of peppers (still making) and some late-blooming roses. 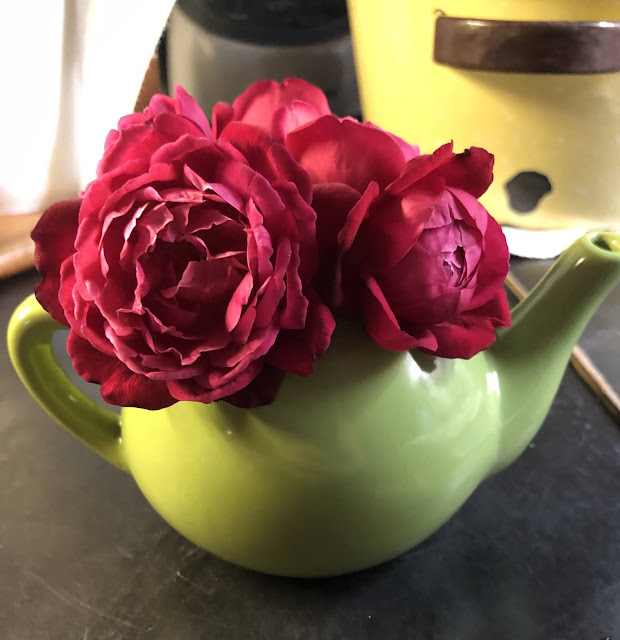 I've talked some on the phone which is a pretty big deal for me. One of the people I talked with was my  Lily whose birthday it is today. I feel like I've just missed all the birthdays this week and of course I really have. But it was so good to talk to her. She and Lauren got to go out of town last weekend for a wedding and they had a good time and I'm so glad of that. And Lauren got the kids ready for school this morning and took them so that Lily could stay in bed which is a very nice birthday present. Lauren is a jewel and a love. I am so proud of Lily. The past two years have not been easy ones but I can see her growing stronger and more capable and more herself every day and it's a joy.
One other thing I did today was read some reviews of the Rolling Stones' first concert of their tour. Sounds like they're still doing it. I watched a few videos from the concert too and they seem more somber and more sober than they ever have before. Charlie's death has hit them hard. But Mick is still wiggling those hips and skipping down the catwalk and Ronnie and Keith seem to be reaching new heights with what Keith calls "The ancient skill of guitar weaving" together. Steve Jordan, the drummer that Charlie chose to work with them is doing a fine job.
But he's not Charlie Watts.
The show opened with a montage of images of Charlie and after they played a few songs, this happened.
Just like Keith to grab Mick's hand and hold it while he gave a tribute. And I loved the grin on Keith's face when they played "Street Fighting Man" and Mick sang, "But what can a poor boy do, 'cept to sing in a rock and roll band?"
Joy.
Our across the street neighbor made us a big pot of chicken and dumplings for supper and that's heating up. Mr. Moon is home from his errands in town. I missed him while he was gone.
I'd say something here about how, as time passes, you come to recognize and appreciate those you love so deeply even more whether you're the Rolling Stones or a married couple. But hey- you already know how I feel about all of that.
Love...Ms. Moon
Posted by Ms. Moon at 7:05 PM