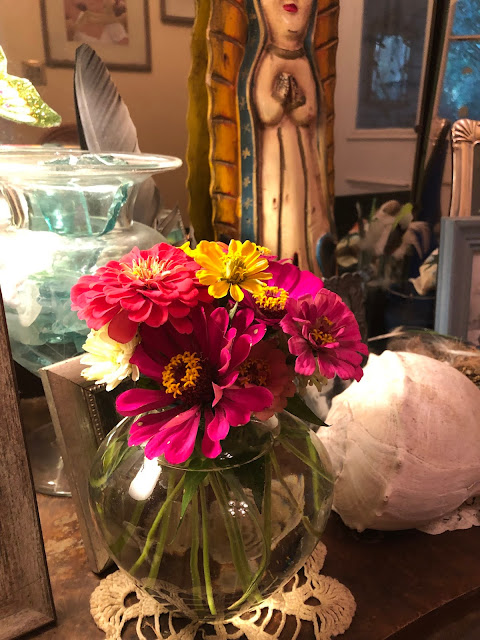 Man. Today has been crash-day. I am absolutely regretting everything I did yesterday which, in retrospect, was way too much. What is wrong with me?
Did I REALLY need to change the sheets and do three loads of clothes and make up a sourdough loaf and go out to the garden and sweep a few floors and...oh god. I don't even know.
No. I did not need to do all of that.
And I paid for it today.
I spent the first half of the day in Mr. Moon's chair which brought back memories of last year when I broke my ribs and practically lived in it for six weeks. Maurice and I watched six episodes of a series on HBO called "The Family Tree" which May recommended to me and it was seriously good. And that chair is seriously comfortable.
Then I went to bed and read and slept for awhile. I think I must have been manic yesterday. Not in the clinical sense but in the I'm-not-in-pain-and-I-survived-surgery-woo-hoo! sense. I really did have a lot of energy.

The only thing I've done is make a pot of vegetable soup. And I probably shouldn't have done that. I feel weepy and stupid and weak and pathetic. But I am not in pain. I do feel like maybe my body is rearranging itself around the absence of the appendix like a cat rearranging itself on a bed after a pillow has been removed. Does that make sense? It does in my mind.

Anyway, I've rested today and will rest again tomorrow. I am not, as I always say, SuperWoman. I am BarelyAdequateWoman. BarelyAdequateWoman whose organs are in disarray. Who went through a bit of a trauma. Whose family will help her in any way she needs. All she has to do is ask.

So you want to hear something that I found amusing? I was going through that list of instructions they give you when you leave the hospital after getting surgery. The nurse, a beautiful woman named Gladys May, went through them with me before I left, so I was just scanning them yesterday and they use the words "poop" and "pooping" instead of more proper and formal terms like "defecation" or "bowel movement." There are many, many references to this very human function because after surgery, especially if one was given or is taking narcotics, that function may be more difficult. I suppose that almost everyone is familiar with the words poop and pooping and in the scheme of things, they are more acceptable than, oh, say, shit and shitting.
I think that poop is a friendly word, don't you?
And NO! I am not still on drugs. Why do you ask?

Again- thank all of you for the very, very sweet comments. Despite my predictable sinking of energy today, I am really doing very well. I am looking forward to my soup and sourdough bread and then perhaps a shower and then going back to bed.